#7YearsWithInfinite and Their 7 Best B-sides

by alouette
in Korean Entertainment
0

Infinite are well-known for their powerful title tracks like The Chaser, Be Mine, and most recently, The Eye. However, over their 7 year career and through their broad discography, they have explored many different genres and styles in unpromoted tracks which non-fans are generally unaware of.

So, as Infinite greet their 7th year in the industry, here are 7 Infinite B-sides and non-title tracks which, in my opinion, rank among the group’s best work. Be sure to check them out!

I love the dark fairytale feel of Tic Toc, a track off Infinite’s first full-length album ‘Over the Top’ (2011). It has that theatrical edge which Infinite always delivers so well, and the original stage outfits and choreography fit the song perfectly. Dongwoo’s rap is a highlight of the track, and one of its most memorable sections.

Despite their reputation for dark concepts, Infinite can pull off bright, energetic concepts just as well. Cover Girl performances are always fun and full of fanservice, and best of all, the members seem to genuinely have a good time. The song also features the rare appearance of Rapper-Sungyeol!

Originally used as the OST for Infinite’s movie “Grow,” Together has become the ultimate concert finale tearjerker. How many times have we seen the members cry to this song? (Answer: too many. Please stop breaking my heart!) And no wonder. It’s a beautiful ballad, and all the more meaningful having been composed by Woohyun, with the other members contributing to the lyrics. Truly a song for the fans and one of their most purely emotional tracks, Together is a classic.

A smooth and jazzy number with that distinctive retro sound Infinite are known for, poetic lyrics (“Love secretly rides down on the moonlight, it flows down into my heart”), and a perfect line distribution, Moonlight is an amazing all-rounder and a personal favorite of mine amongst the group’s more recent releases.

Hysterie is one of Infinite’s (many) great songs which are rarely performed these days, but it’s never been forgotten by fans. A B-side of the group’s 2011 mini album, ‘Evolution’, the song is a lighter foil to the title track, BTD, but just as unique and engaging.

Nearly every group has that “rainy day” track, but this is one of my favorites. In typical Infinite style, rather than being melancholy, the song is powerful and energetic. The vocals are a strong point of this song, and I feel whoever arranged it did a great job of playing to each member’s strengths.

Inception is the B-side which, in my opinion, should definitely have been a title track. From the opening bars you know you’re in for a bop and a half, and Infinite certainly don’t disappoint. The sexy choreography could easily be corny if performed by a less charismatic group but they pull it off perfectly, making it one of my favorite performances to watch. If you check out one Infinite B-side, make sure it’s this one!

Happy 7th anniversary to Infinite and Inspirits. Here’s to many, many more years of great music. 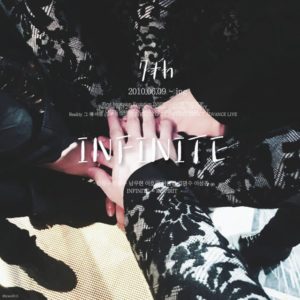 The Ultimate Guide to K-Pop Albums and its Types

One thing that I will always find fascinating about K-pop is the fact that its music industry is so systematized and organized in a way that is vastly different from mainstream music. It has different sets of principles and...