Recommended For: People that enjoy dance-pop that mixes retro and modern sounds

NOT Recommended For: Fans of the cutesy bubblegum pop variety of music

EXID is back with their fourth mini album Full Moon, featuring the vocal and rap talents of all five members despite Solji not actively promoting with the other girls this comeback. Comprised of six tracks, this album includes an even mix of solos, duets, and songs that feature the entire group. The sound of each song varies considerably across the album, which makes it not entirely cohesive, but increases the chance that someone will hear at least one track they like. As for me? Read on to see.

The title track “DDD” starts off the Full Moon album strong, and it’s arguably one of the catchiest girl group songs of the year. “DDD”  returns to that “Up and Down” sound that made EXID popular and is a step away from their more subdued recent releases. While some fans may be disappointed by this reversal, I am personally too taken by how much of a jam this song is and can’t be bothered. K-Pop has really been dominated by “cute and quirky” girl group releases recently and “fun and sexy” is refreshing to hear. The instrumental itself is the driving force that makes this song so unique, with its thrumming electronic beats overlain by a constant hum that is so different from any other K-Pop release this year. It’s the perfect soundtrack to the girls’ own distinctive voices.

My favorite part of this song has to be Hani’s bit in the prechorus. It’s striking in the way the humming of the instrumental drops away and Hani sings in a voice much lower than the lines typically given to her. I’ve always found it a bit odd that she tends to get the higher parts of the EXID’s title tracks when her voice is at its best when she’s singing low and sultry. The chorus that follows is the weakest part of the track, and it stays true to EXID’s recent formula of a Hyerin’s vocals opening it and Solji’s closing it, with the final finish being the hook – in this case “Dul dul dul.” It is a notably different sound from the rest of the song, but I don’t think the transition is a jarring as I’ve seen some people complain. At least, the very simple segue from the end of the chorus to the next chorus helps makes the switch less stark. The rapping in this song is well-placed and intermittent with the vocals, à la a typical EXID title track, and serves to remind me why LE is one of my favorite idol rappers. All in all, “DDD” is probably one of my favorite girl group title tracks of 2017 and certainly one of the most likely to get stuck in my head.

Up next is the track “Too Good to Me,” which is the only other song on the album that features all the members together as a group. It starts off without much prelude, jumping directly into a chorus featuring Junghwa and Hani’s vocals. The instrumental carries a soft keyboard sound that is becoming a somewhat familiar motif in K-Pop music recently. But some of the more funky beats and LE’s rapping in particular transform the song itself into something that is not as gentle as the few soft chords of the very beginning of the song would initially hint.

The second chorus rather impressively manages to give every member except LE a singing part, though none of the members actually sing together. LE’s parts in the song are sprinkled throughout the first and second verses, rather than concentrating on single rap breakdown in the latter half of the song as many K-Pop tracks do. The bridge is stripped down with almost the entire instrumental removed for Hyerin and Solji’s vocals to shine. But the song picks up again for the last chorus before petering out to a soft finish. “Too Good to Me” stays in line with the almost catwalk or photoshoot-esque soundtrack most of the songs included on the Full Moon album embody, which makes it a very cohesive addition to the mix. But the song itself, despite being what I would classify as a pop song in the loosest sense of the word, is very low energy. There’s nothing aggressively upbeat about it, and though arranged and performed very nicely, it’s doesn’t really beg to be replayed – especially after the banger that is “DDD.” As much as I enjoy another group track from the girls, I can’t help but wish this one was a little more memorable. 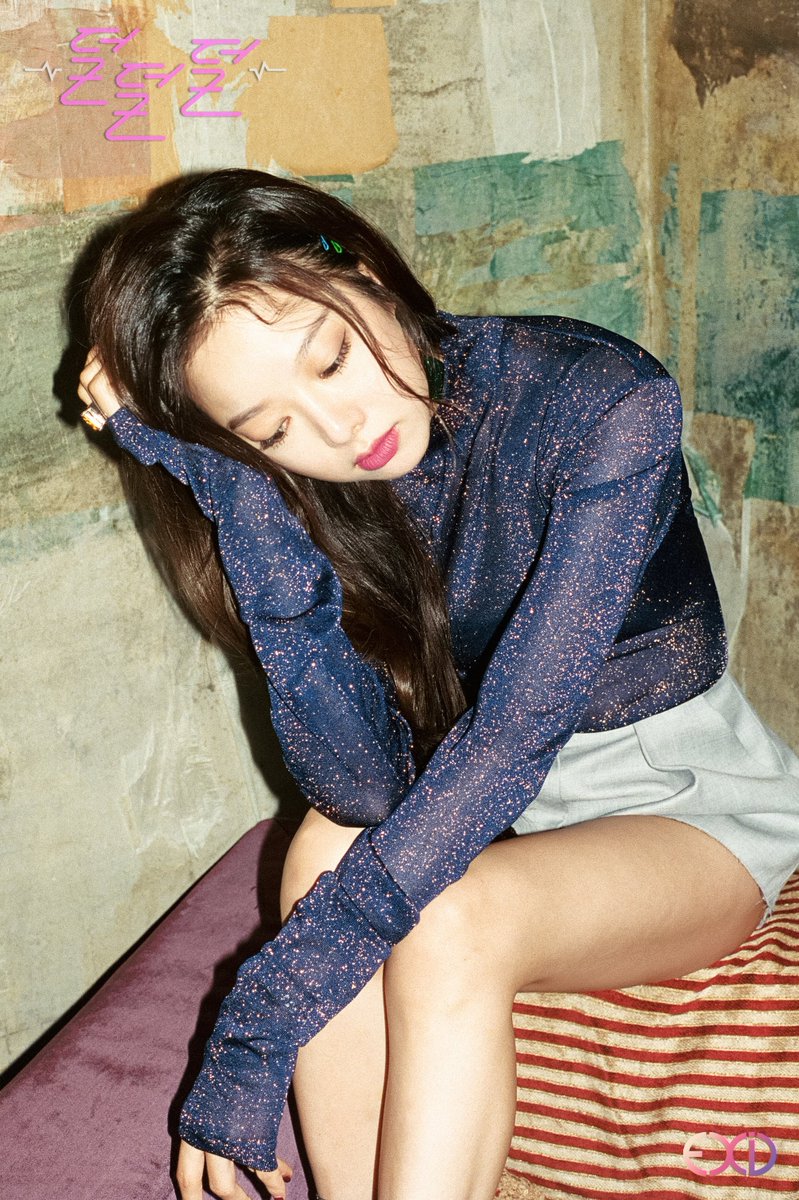 The third song on the Full Moon album is a solo by EXID’s main vocalist Solji entitled “In My Dream.” Though not participating in promotions with the group or in the title track music video, Solji was still able to provide her voice to this rather lovely pop-ballad. This track is a change of pace from the earlier tracks on the album, but the soft keyboard of its initially simple instrumental is something that is consistent with the sound of “Too Good to Me.” The chorus of “In My Dream” is very K-Drama OST to me, but in a good way. It balances the strong power vocals that Solji is known for with a much less aggressive voice. There’s something almost Christmas-y in the bit of instrumental that directly follows the chorus; perhaps it’s the chiming of bells that leads into the next verse. It sounds strange in writing, but it’s this eclectic mix of sounds that keeps this song interesting.

Despite being a ballad, “In My Dream” does a beautiful job of building in complexity as the song progresses and it’s definitely not a forgettable throwaway ballad included to fill out the album. I personally love ballads, but some can feature outstanding vocals and still lack memorability. Solji manages to deliver both with “In My Dream” and it’s a great addition to Full Moon. 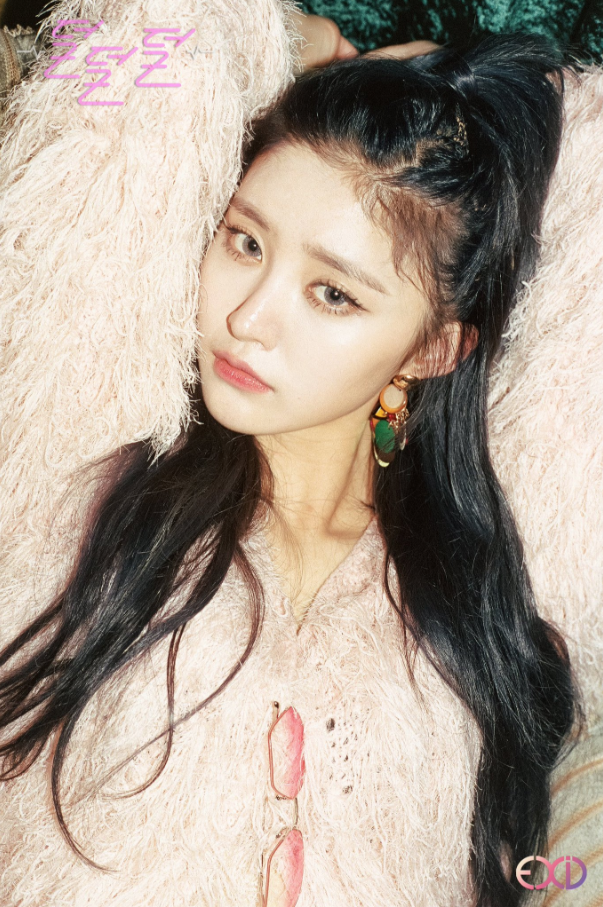 Now we come to the fourth song of the album called “Alice” which is a collaboration between EXID member Junghwa and Pink Moon, who had previously worked with Junghwa for the song “Deep Sleep.” There’s something very whimsical about the first few notes of this track but it’s quickly replaced by the fast-moving beats of the chorus and Junghwa’s vocals. That sound is then followed equally as fast by the first verse which has a strikingly different vibe. This song really goes places, and throughout each verse there’s this sense that it’s building somewhere which makes the thumping beats of the chorus all the more satisfying. I love how each piece of “Alice” is quirky and different – the chorus, the verses, the bridge – but they all fit together without being discordant.

I get major catwalk vibes from this song, or maybe Forever 21 background music. It’s not really something I would associate with a song about Alice and Wonderland, but I’m certainly not complaining. The track is polished, it’s mature, and it’s just an altogether great b-side for the Full Moon album. Honestly, I don’t think Junghwa’s voice is particularly strong but this song doesn’t really demand that type of technical skill and her soft voice actually really works with this style of music. Altogether, “Alice” is one of my favorite b-sides of the album, second only to the song that directly follows it.

The penultimate track on the Full Moon is a duet by LE and Hani, the only members without a solo on the album, entitled “Weekend.” The song begins with some strong 80s synths but the instrumental gradually moves away from the retro sound once Hani’s vocals enter. Hani and LE get equal parts in the first chorus, tackling their respective parts with the vocals and rap each girl is known for. Given that LE is widely known for her rap skills, it was a little surprising to hear her part in the chorus where she sings but she pulled it off. I could sing praises for Hani’s voice all day, and she certainly deserves them in this song, but I’ll keep it simple and say it suits this sound well and is the perfect complement to LE.

The chorus is followed by some very cool electronically altered vocals that are distorted beyond comprehension. It’s an effect that can easily become annoying, but I think works nicely in this track to bring some energy to the otherwise very subdued vocals and rap. The instrumental in general elevated this song beyond something that could easily have been forgettable and turned it into a real gem. This was the b-side I expected to like the most from the album’s highlight reel, and my predication was indeed correct. It’s upbeat but not distracting to listen to, and while it featured much less rapping than I would have expected from a Hani and LE duet, the dynamic between the two totally works. The song is also perfectly in line with the high-fashion pop sound of many of the other tracks of Full Moon and makes for a great inclusion to the work as a whole. 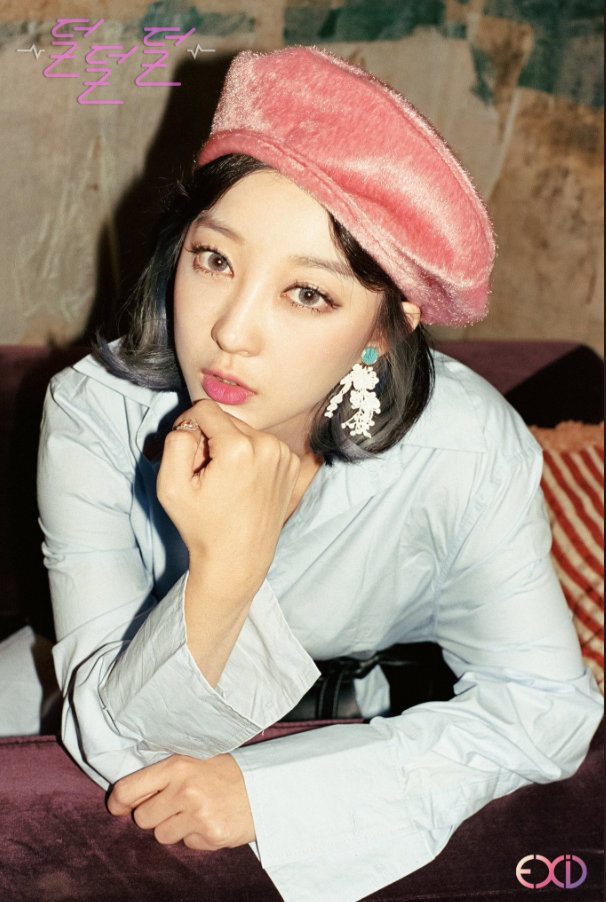 The Full Moon album wraps up with one final solo, this one titled “Bad Breakup” by Hyerin. This is the only true traditional ballad of the album and a great opportunity for Hyerin to demonstrate her vocals. The first verse and chorus are fairly unremarkable, just Hyerin singing slowly over a very simple piano instrumental. The instrumental picks up and grows in complexity with the introduction of more instruments as the second verse begins, and this all culminates in an explosive lead in to the next chorus. I really love the little touches of Hyerin’s own adlibs thrown in as accompaniment to the vocals that make up the forefront of the song. When the song finally comes to a close, it’s after a very strong final chorus before the much softer sound of the beginning returns to finish out the song.

Hyerin is my EXID bias, but I’d probably pick this as the most forgettable track on the Full Moon album. I think ballads with a simple piano instrumental can be effective, but “Bad Breakup” just isn’t different enough to leave a lasting impression. It does build and grow as the song progresses but it’s not something I’d feel compelled to return to often and give another listen. I’m a bit surprised this was chosen as the song to close out the album, being at is it, but I do think it succeeded in showcasing Hyerin’s vocals for what they are: great.

After being absent on the people's playlist for five years, the drought has now come to its demise as Bom returns with a new album under her new home, D-Nation Entertainment. Known by many as one of the most...

REVIEW | EXID Return as Five for “I Love You” Comeback

After two years of four-member comeback promotions, EXID have reunited as five once more with main vocalist Solji for their latest single, "I Love You." Despite the renewed sense of unity amongst the team, the five girls return with...