Anohana: The Flower We Saw That Day Anime Review

by Darkchao45
in Japanese Entertainment
3

First of all, for those of us not of Japanese descent or fluent in the Japanese language at all will have a hard time even thinking about how to say “Ano Hi Mita Hana no Namae wo Bokutachi wa Mada Shiranai”, it is like a cruel tongue twister you don’t understand. So most simply call it Anohana. Anyways let us begin…

Anohana starts out typical if you have watched tons of slice of life series. We are introduced to Yadomi Jinta “Jintan” playing video games in a seemingly hot summer day. His expression and grumpy attitude, at first glance tells you he resembles a hikikomori. After a little while, a small girl named Menma appears and begins to pester Jintan into making her food. Menma is a happy energetic girl who likes to help others. She is a bit of a klutz at times and worries for Jintan. Shortly after Anjou appears at Jintan’s doorstep to deliver his homework. The meeting is rather awkward since Jintan has made himself into a social outcast, growing distant from his friends and avoiding school. Jintan, Menma, and Anjou are childhood friends. Together with Poppo, Tsurumi, and Yukiatsu, they form a childhood group called the “Super Peace Busters”. 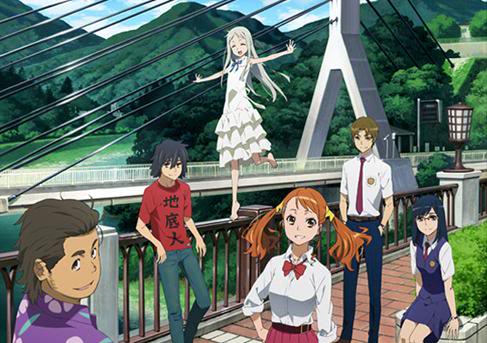 Some years ago, while in a group meeting, a terrible event happened that led to Menma’s death. Ever since then, everyone has distanced themselves from another, except for Yukiatsu and Tsurumi who go to the same school.

The death of Menma caused a great distancing between the main characters. One blamed another and so on. Some years passed and everyone except Jintan has moved on. However, that is not entirely accurate as the series progresses. We are shown how much each character has suffered due to their own personal turmoil’s towards each other and to the deceased Menma. Menma herself has come back as we see in the first episode but only Jintan can see her. Why she has come back is something Jintan tries to find out himself. In the process, he begins to encounter his old friends. At first, everyone except Poppo seems to resent him and harbor ill feelings towards him. He keeps telling them Menma has come back and that only he can see her. Anyone in his or her right mind would find such a story both maddening and preposterous. This causes an even bigger friction between Jintan and Yukiatsu. Yukiatsu shows the most ill will towards Jintan. He has always been jealous of Jintan for reasons later revealed in the series. Eventually, in his quest to find out what Menmas reason for roaming the earth again is he manages to reunite everyone. Together they search for the meaning behind Menmas re-appearance.

The whole story is character driven. We see how something so tragic like the loss of a childhood friend stays with the main characters years later. The ways the characters are portrayed in the very first episode make it easy to tell them apart. Despite all of them showing they have moved on since Menmas death, their facial expressions say otherwise. The constant hint of realism in both the visuals and characters work well with each other. The anime obviously works hard to provoke an emotional response, and god knows how many times I got teary eyed. The art is nothing short of great. I have nothing negative to say. Its best to watch this show in HD, anything less and you will be missing out one of the few new series that actually pays attention to detail. The soundtrack is satisfying. Ano Hana has a number of slow pieces of background music that reflect the sad and bittersweet air to the story. The OP & ED also portray the same feelings.

If there is anything negative about the series, is its predictability in its first half. Jintan is the outcast, no one likes him, but slowly he starts to change people’s minds. That is what you expect as you watch the first half of the series, and although it stays true throughout the entire series, we are thrown a couple of unexpected curve balls here and there, adding a nice change of thought and making the show more realistic and enjoyable. The last two episodes though enjoyable and heart wrenching, spew too much drama, which at times seems like a tad much.

Note: Get ready to cry, because you will.