by Maisha A.
in Editorials, Featured, Korean Entertainment
2 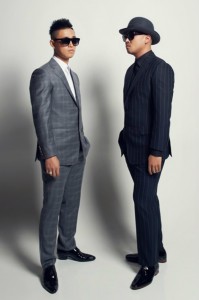 Leessang is an extremely successful hip hop duo consisting of rapper Kang Gary and vocalist Gil. In 1997, Gary met Gil through a hip hop group called X-Teen. After leaving X-teen, Gary and Gil joined Honey Family, in which Brown Eyed Girl’s Miryo was also apart of. Gary, Gil, and another member of Honey Family, Diggity formed a trio group called Leessam Trio. Diggity left in 2000 and Leessam was changed to Leessang with members Gary and Gil. They had their first breakthrough hit with the song “Rush”, with singer Jung In, who has collaborated many times with Leessang (source).

I am so, so, so grateful to “Running Man” for introducing me to one of the best hip hop group in Korea, Leessang. I fell for Gary after seeing his romantic, cheesy, and hilarious side on “Running Man” but fell even harder after listening to Leessang’s song in the background during Monday couple moments. The first song that turned me into a Leessang fan was “The Girl Who Can’t Break Up, The Man Who Can’t Leave”. Gary’s offbeat rapping is so charming and unique.Many people would think it’s strange to rap in that manner, but in their songs, it sounds amazing! He has his own rapping style which differentiates him from other rappers. Also,Gary can portray his emotions so well in the songs. Whether he’s angry or upset, he is able to express his feelings easily, which not all rappers can do. Secondly, Gil’s rough and husky voices meshes perfectly well with Gary’s offbeat rapping. His voice is distinctive as well.

In the MV of “The Girl Who Can’t Break Up, The Man Who Can’t Leave” Lee Hyori and Ryu Seung Bum plays the role of a couple who are having various problems in their relationship but can’t break up due to their feelings. This song (along with “Ballerino”, “You’re the Answer To A Guy Like Me”, “Leessang Blues”, and “I’m Not Laughing”) is actually about Gary’s ex girlfriend of 7 years.

The reason why I really love this song is because of the beautiful lyrics. In the first verse, there is a part that goes like “Understanding each other in our sleepless nights, my dreams become your future. A pair of beautiful birds chasing each other, a love I could never get enough of, a person I want to meet when reborn. But in front of this thing call time, we can’t win against greed” (source). This part was absolutely stunning; the lyrics are full of raw emotions which can be clearly heard when Gary raps it. It’s clear how much Gary loved that woman (who is now married to another man).This is the song that made me a Korean hip hop fan and it’s also the first song I introduce to people in order to convert them to Korean hip hop as well ( Author’s Note: My attempts are usually very successful through this song, by the way!).

The second song I recommend listening to is “Rush”. I was infatuated with “Rush” because it reminds me of the early 2000’s R&B songs (Author’s Note: this song and MV was created around early 2002). From what I understood from the lyrics, this song is about Gary and Gil facing obstacles in life and overcoming it as they chase after their dreams. Once again, the lyrics are on point; it’s poetic and beautiful. Gary raps more aggressively here but his flow is still smooth while Gil and Jung In are flawless with their vocals. The MV is funny to me; it’s hilarious to see a young Gary with dreads and Gil looking like a thug. (Author’s Note: I would highly recommend checking out all of their collaborations with Jung In, the “third” member of Leessang).

“Tears” was a huge hit among the Korean public as well as some international Kpop fans! Despite the lack of promotion, the song did excellently on the charts; it became the first Perfect All Kill for that year (2013, source). For this song, Leessang collaborated with Eugene/Yoojin/Yujin, a member of The SeeYa. My mind was blown after hearing her sing. She has such a killer voice which suited the song style very well!

There are so many Leessang songs I can recommend, but unfortunately, I can’t list them all. My last recommendation is “The Pursuit Of Happiness”. I adore the simple beat here but I love the lyrics even more! As you can guess from the title of the song, it’s about them pursuing their own happiness. In verse one, Gary talks about the happiness that comes from writing songs. Even though he was exhausted, he was still pleased to record his songs; it would bring him fortune and fame. In verse two, he addresses that his mother was jealous of Gil’s experience in variety programs. Hence, he decided to join “Running Man” and became happier especially since his parents were proud. In this song, the most touching part is the third verse: “In this marathon call life, our paths might be different, and even if we live insufficiently, we live with the fun of filling it up. Though there is a lot of hardships, get to know the taste of enduring and take one more step. ‘Why is my life like this?’ Those words are just excuses. Don’t give up so easily on this game called life so when you close your eyes in this world, you can open your last door of happiness without regrets” (source). This is such an vital and inspiring message. A plethora of people can definitely relate to this. In life, we face many problems but it’s crucial to not let those problems bring us down. As a lyricist, Gary really delivers strongly. He’s the type of person who can write beautiful lyrics as well as rap with emotions.

I was so ecstatic at having the chance to introduce Leessang to our readers! It’s because of Leessang that I discovered the beauty of Korean hip hop. Leessang is known for having beautiful love songs, but that’s not all they talk about as you can see with “Rush” and “The Pursuit of Happiness”. Their love songs tend to do extremely well on the charts though. There was a rumor that they would comeback this year, but there’s no details of yet. As a fan, I would be more than excited to see a comeback from the talented duo soon! Hopefully, Leessang continues to produce amazing songs for a long time.