by Sapphic
in Featured, Korean Entertainment
3

This article is the first of a series of breakdowns. Over the next weeks I’ll be looking into the style of a particular director or production team, and what makes their music videos so intriguing to watch and analyse.

This week will be a focus on the production team called VM Project who have directed for EXO, BlackPink, and Red Velvet, in some of their most notable music videos.

What is VM Project?

K-Pop fans will know that BlackPink took home MAMA’s Music Video of the Year during their 2016 awards show, but many will not know the production team behind it all. VM Project has directed many notable music videos in the K-Pop scene, and continue to expand their reach from labels such as SM and YG. Starting off as a commercial production team they began working in-house for SM and YG sometime in 2014. Their first noticeable contribution to SM’s music video style was f(x)’s “Red Light”. At the time, this music video gained attention from fans for breaking some of SM’s rules – mainly that of the “box”, which consists of a built set inside a studio – and would cement some of the key aspects of their style.

Though VM Project doesn’t hide away from the “box” style of music videos, they take this as a creative endeavour in changing how these music videos are shot, designed, and edited in order to create different atmospheres and give a semblance of a plot, or feeling, even where there might not be one planned.

Take, for example, these two shots. The former is from SM’s Younique Unit and their song “Maxstep” and looks very on point with SM’s former look. It’s commercial, their shots are mostly medium or close ups with very little going on in the background, there’s no storyline, and the set itself has clearly been made inside a studio given the architecture. The latter, from EXO’s “Monster”, differs from this. Though the shots are fairly standard there is a semblance of a plot (anarchy and police violence), filters to enhance certain colours, filmed in a studio but also using real life locations, and the lighting brings in strong contrasts between the foreground and the background. These subtle changes make for a new look overall, and one that has allowed SM to expand creatively in their concepts.

VM Project’s style has a distinctive look, but one that has many facets that aren’t present in every music video. For instance, the CGI used in BlackPink’s “Whistle” can’t be seen in Seventeen’s “Don’t Wanna Cry”, and as such it’s hard to pinpoint exactly what makes their music videos so easy to notice as their unique work.

Fortunately, there are enough recurring stylistic choices that, when pulled together, give away the source of the production. Often VM Project will use single shots of inanimate objects being deconstructed in between scenes of the idols in order to create pace, energy, or a feeling of danger. Or, use panning and dollying of shots to create motion and exploration of space as well as these qualities.

Something that I have noted that reoccurs in their music videos is the act of creating spaces with nature, inside an industrial and uniform shape. It’s surreal, but adds to the mysterious, and somewhat futuristic, feel that is present in music videos like EXO’s “Love Me Right”, NCT U’s “7th Sense”, and Monsta X’s “Beautiful”. VM Project’s sets are filled with LED coloured lights, textures, boxes, and deep spaces. All of this contributes to the sense of “other”, or a dynamic look that is more layered and artistic, that previously was missed. 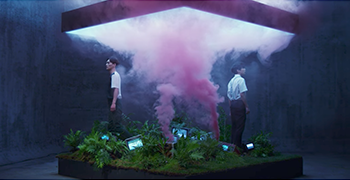 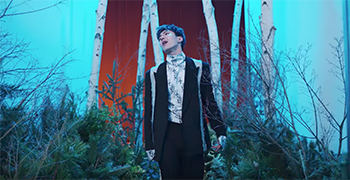 As for their lighting, the scenes often vary, but a few things remain consistent: there’s strong contrasts, filters, and dimension. On sets there are many different ways you can light the studio or setting, but often the way it is done involves three main type of lights: backlight, low (or high) light, and fill light. The backlight ensures the background of the shot is lit, the low/highlight describes how the lighting creates contrasts, and the fill light eliminate the shadows that are missed in the previous two light setups.

With VM Project they experiment with this in a multitude of ways. Sometimes they won’t use a backlight so the bodies of dancers create shadows, or the backlight will be a series of moving stage lights that create movement and excitement. They’re really diverse with how they use it, but still in ways that create a similar, striking look through all of their music videos.

Some of their more “mysterious” concept music videos look as if they’re inspired by Edward Hopper, an artist who is known for his works depicting American life. His painting “Nighthawks” is one of the images brought to mind when thinking of VM Project: the strong, bold colours, the lighting contrasts between the brightly lit bar and the street, and the feeling of unexplained mood are all present in VM Project’s productions. 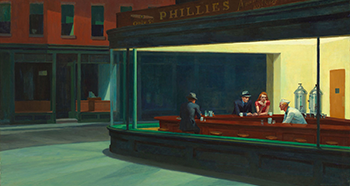 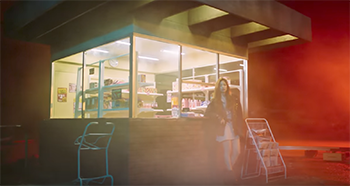 One of the biggest things that intrigues me about VM project is their editing, shots, and imagery. This is where their experimentation with their work truly takes a turn from the usual. Where Digipedi may be great with their sets and how fun the world they create is, VM Project feels like an art project that is dedicated to creating something beautiful and intriguing.

Their music videos are filled with shots of all angles. They routinely mix what we can see with close ups of hands, of objects, with establishing shots of scenery and performances. The back of forth of these styles of shots bring the viewer closer into the world of the concept. We aren’t merely gazing into a world of flashy cars, costumes, and dancing, but instead involved in a story in a more intimate way. As well, the angles and shots move continuously and in unorthodox manners. “Whistle” used the motion of continuous panning and dollying up and around to create an idea of spinning around a globe. It draws the world of the music video much tighter so we’re fully immersed. There’s more excitement when viewing something that’s full of motion, than something that stays routine by panning and dollying left to right, up and down. However, a characteristic that is seen in almost all of their music videos is the panning in and out. Even when VM Project doesn’t need to create these similar worlds to “Whistle” they still maintain some motion in their music videos to draw in the viewers to the scenario.

As to the actual concepts, sets, and imagery itself VM Project is really creative with the ways they experiment. They have two different styles when relating to this: Firstly, the EXO “Monster”, BlackPink “Whistle”, Red Velvet “Dumb Dumb” style of bold secondary colours, CGI, and sets where the line between idols, each item, and colours is distinct; and secondly, the Seventeen “Don’t Wanna Cry”, Jessica Jung “Wonderland” style that is more natural and realistic but still uses bold shadows and careful use of backgrounds in order to maintain their style.

The first style is all about powerful imagery and impact. The emotion is in a powerful song and concept, VM Project is merely aiding this with a strong presence on screen that is memorable for the viewer. For a music video I keep referencing, EXO’s “Monster” uses contrasts between bold colours, and subtle changes in lighting, to create dynamic images that really speak to the concept and plot they are going for. 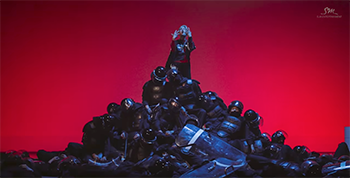 Here Kai is sat on top of a pile of police officers, but for me the most striking part is how it looks stylistically. They could have easily had a pile of men out in the open, natural day light, dressed in Korean police uniforms, but instead it’s riot gear. It’s almost a pyramid. It’s about domination and strength.

However, in Seventeen’s “Don’t Wanna Cry” the presence of an anarchist storyline is not present. VM Project finds another way to create interesting imagery by using daylight to create bold shadows of the the group. Otherwise, the shots are fairly different from the other work we have seen by the production team. If the street is busy, the shot is distant to minimise the amount of flaws in buildings and streets. If there’s a close up on a street there is a pattern or plain background behind them so the aesthetic seen in other works is still present here. 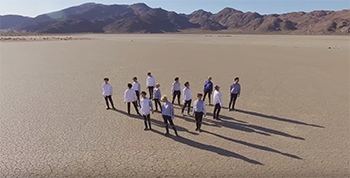 Something consistent between the two music videos is the fact that the background is rarely blurred. The whole shot is in focus and every detail is clear to the viewer. Where I’ve argued before that VM Project has created dimensions to explore is no longer true in wide shots or performance shots. Instead, the image is flat. This isn’t necessarily a bad thing, as I find this to be just as drawing since you can discover things that otherwise would not be visible if you were with them on the set.

Another kind of imagery that is present in a few of their music videos is the idea of disrupting the fourth wall. Blurring of faces, moments when one shot looks as if it’s corrupted footage, and other instances really remind the audience that they are watching a music video. VM Project do all of this to bring the audience into their world, but suddenly drop that and bring you back to the moment of the music video itself and not the story. 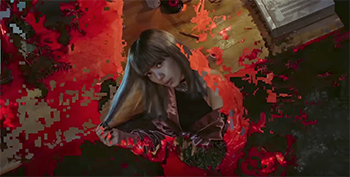 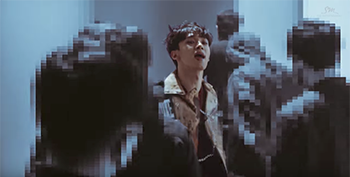 So, how is this groundbreaking?

What makes VM Project so interesting is that they began producing music videos in two of the biggest entertainment labels in K-Pop. These two labels are known for leading the way with concepts and productions, so the idea that VM Project came in and changed how these labels worked in one of their biggest spots of promotion is intriguing. Their usage of all of these elements to change the very standard close up shots, performance shots, fill lighting has created a new trend in K-Pop where every detail is paid attention to in an artistic manner. They’re not the first to bring plot and feeling to music videos, but they manage it in a less commercial sense, and more in a manner that can be seen as a photographer’s. These, of course, are biased thoughts and ones that only matter to me and those who feel similarly, but given the amount of work and attention VM Project has gained in the past 3 years it’s very clear that their endeavours are quality. Whether they can continue to work at this pace, or move into the middle ground with ZanyBros and Brave Brothers, will remain to be seen.

On a less serious note, VM Project really love their tables. I don’t know why. It’s unexplainable. A mystery to discover. 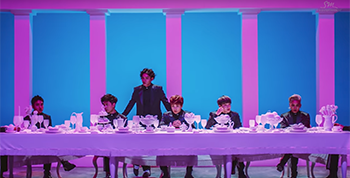 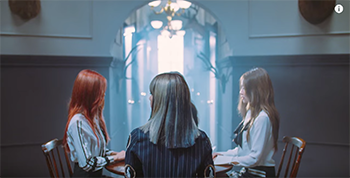 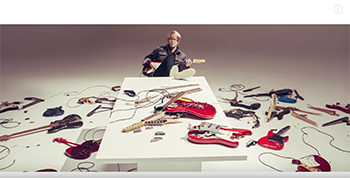 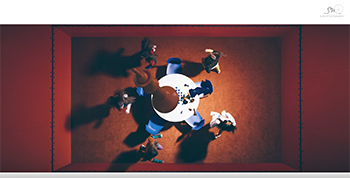 I’d like to put forth suggestions to music videos you should watch by VM Project to see their variety and style when it comes to different concepts.

And just because they’re interesting:

Just a film theory student trying to learn how to write. I love bad movies, and women.