What do you get when you mix SAO and The Hunger Games? You get Btooom! A twisted mix of those series, and then some…

A popular online game has spread by the name of Btoom! The game doesn’t use guns nor knives, but focuses instead on bombs (hence the name) and strategy. Ryouta Sakamoto is ranked tenth in the world, and considered the best Japanese Btoom! player. His life is nothing to be jealous about for he is a NEET. He has no social life, his relationship with his parents is beyond repair, and he lacks any sense of responsibility. Indeed, Btoom! is his only escape. But as he soon realizes after waking up in a tropical island in the middle of nowhere, his escape has now become his worst nightmare.

I recall watching The Hunger Games and thinking to myself how barbaric a game it was. Making people kill each other for the sake of amusement, convincing the players that the lone survivor will be freed. Then I stumbled on Btoom! and realized what The Hunger Games could have looked like had it been taken up a notch. Senseless killing, psychological traumas, rape, and to top it all off there are kids in the mix. 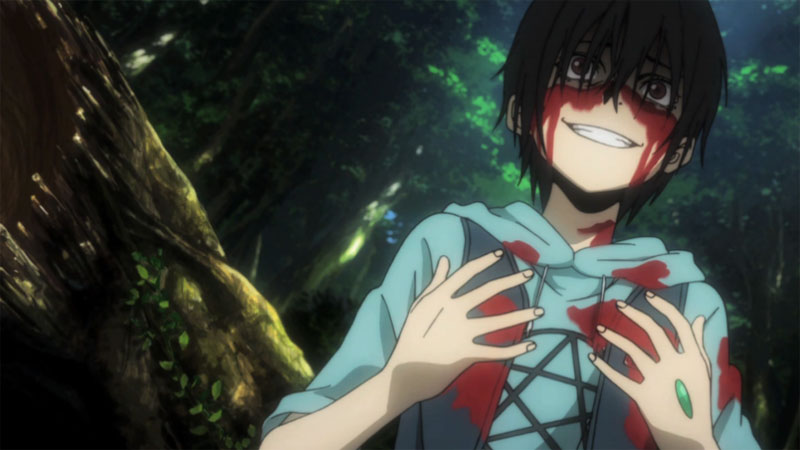 Suffering from extreme psychological problems is common in this anime.

Btoom! starts out rather typical and seemingly predictable, but throw any assumptions you had to the side. Predictability is half assed in this anime, sometimes you will be right and others you will not. It made for an interesting watch, and overall made the show more realistic. Art-wise it was good, nothing amazing, it was on point and nothing else. The OST was also on point. Nothing really stood out at me though, the focus was clearly the plot. Character development was decent albeit; Ryouta is a very confused character that doesn’t realize you have to kill to survive until late in the anime. Himiko, an obviously foreign looking girl at first glance, is another main character that has major problems, but her problems are justified if you ask me. Ryouta’s confusion (or lack of will) was indeed a frustrating thing to watch, but the shows biggest problem is the lack of care for the laws of physics/nature. You cannot expect me to believe that a bomb thrown less than a foot away will not harm you. This nonsense was seen all throughout the anime. Unless it was convenient to the plot, none of the characters were seriously harmed. As viewers we are expected to believe the people surviving on the island are nothing more than ordinary people, but when they start surviving unbelievable circumstances, well, the urge of wanting to punch a wall or two sets in. It is never explained why the characters of the show are stranded on the island and forced to play the deadly game they are playing. There were some hints here and there as to why the game was developed, but nothing was formally explained. It’s best to not assume anything until the manga gets ahead or a second season is developed.

Regardless, Btoom! is an enjoyable anime that makes the viewer think about humanities inner darkness. If you can live through the blatant attempt to throw the laws of physics out the window, then Btoom! will make for an interesting watch.