His and Her Circumstances (Kare Kano) – Anime Review

by Darkchao45
in Japanese Entertainment
3

Note: If you have read the manga, I am well aware of the “issues” and will address them at the end of the review.

The story starts out with Yukino Miyazawa. Yukino is at the top of her class and is kind, intelligent, pretty and modest to boot. Everyone praises her and is usually the center of her class and school. She gladly takes in all the praise and admiration because of her true nature. You see, she has put up a facade for most of her teenage life. In reality she is not as kind and modest, she’s actually pretty arrogant and self-centered. This little facade goes on until Soichiro Arima catches Yukino showing her true colors, and I mean catch literally. Soichiro is a new student at the school and is also kind, handsome, modest, and intelligent. However just like Yukino he also has a “dark” side and decides to blackmail Yukino after discovering her secret. As these two develop an odd friendship many things start to occur around them, and then romance steps in to make things even more complicated… 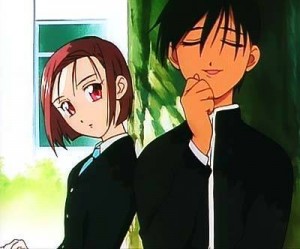 The art in this series is “experimental”. Visually, as the anime progresses, it delves deeper into an avant-garde style of presentation. It becomes less of an animated series and more an experiment in visual storytelling. I personally appreciated this aspect of the series as it made me look forward to seeing how the story would be told in each episode. From the popsicle stick figures, cityscapes, flashing images, sketch book drawings, etc. In essence, it was very different and very interesting to watch. Think of the art as a mix between TTGL and FLCL. Kare Kano mixes romance and comedy well. The romance is not cheesy most of the time, which is good, and the comedy is top notch. Both Yukino and Soichiro’s friends make sure to add more of both into the mix. I guarantee anyone who watches this anime will be laughing nonstop throughout the series as well as letting out a couple of awe’s here and there.

Moving on to the music, the soundtrack was not very impressive. The music throughout the anime was average. I feel they could have made a better soundtrack but it is nothing to complain about.

The OP & ED however are great, personal favorites of mine.

Going back to what I said about the manga, I feel I should make some things clear. Most who have read the manga and then watched the anime complain about its weird approach and outcome. Though the anime is based on the manga, it does drift away from it. The anime implemented more comedy than its manga source and some things are changed so that it fit into 26 episodes. Directors were also changed and you will notice the anime change gears around the middle.

To finish off, there is rarely a dull moment in this series and it is constantly making sure you are up to date with what has happened so far, which does get a bit annoying if you marathon through the show. Story wise, it is nothing special. Its how it was portrayed that makes it very entertaining. I really did enjoy this anime and hope everyone else will give it a try.

Note: The ending will leave you speechless, for many reasons.