My room was on the fourth floor of the dormitory, number 401. Kamuro and I entered the elevator simultaneously.

I was standing in front of the buttons, but even when I asked her this, she did not answer, so the doors closed in silence.

The elevator that was moving smoothly arrived to the 4th floor shortly.

When I got out of the elevator, Kamuro got off too as if she was following me.

It’s a simple coincidence. She came to visit one of the guys.

It seemed to me that these possibilities were highly unlikely.

“Is there anything you want from me?”

I shouted to Kamuro after having walked pretty much until my room (that was pretty straightforward, btw).

“I have to talk to you about something.“

“If possible, I would prefer that you have said this, earlier.”

“Nah. But isn’t it bothersome to have a conversation while standing?”

“It’s because I’m sensitive to cold. But, if it’s okay with you, could you invite me in?”

She said it as a polite suggestion, but it was actually somewhat of a threat.

I unlocked my room and we both got in.

Without changing any expression, Kamuro checked the room with a serious look on her face.

“Is that your first comment after forcibly entering my room?”

“Forcibly? I asked for your permission.” Kamuro said as she sat on my bed.

“The way you asked for it… Well, nevermind. And?”

“Bring me something to drink. It’s gonna be a long story.”

What an audacious girl.

“I’ll make tea or coffee then.”

“Don’t you have hot chocolate?”

With me giving her two options, I wouldn’t expect her to ask for a third one.

“So what’s the story about? If it was too cold in the hallway we could have gone to the lobby, instead.”

We should have been able to talk without a problem there, since the lobby has a functioning heater.

While I was preparing hot chocolate, Kamuro continued.

“We won’t be troubling anyone here so it’s the best place to talk.”

“What will we talk about?”

To be honest, I didn’t want to hear it and I had no interest, whatsoever.

“Are you maybe on guard?”

“It would be weird not to be. A girl from the rival Class A, I’m even not close with, came to my room.”

“It’s because Yamauchi and you are different.” She said as a test, looking at me.

“Is that so? Then, I won’t touch on that subject any longer. It doesn’t matter anyway.”

There was a possibility her hands were hiding a telephone tapping or a voice recorder, Kamuro is in a somewhat peculiar position.

Since Sakayanagi knows about me, there was no need to send Kamuro here and skilfully check on me. If necessary, she can always set a trap against me any time she wants. For now the main reason that she doesn’t is because she would hate for me to stand out.

“These letters from earlier, about Ichinose. What do you think?” 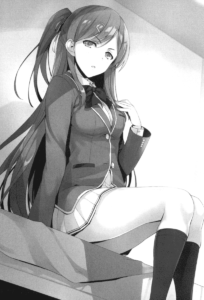 “About what they are claiming. Do you believe that she is a criminal?”

“I don’t know. I’m not interested to find out either.”

“Even if you’re not interested, I believe that you have formed an opinion about it. Is Ichinose a good person or a bad person?”

First and foremost, the definition of good and bad is really vague. It varies greatly as it depends on how you look at it. So, your position about what’s good or bad might change greatly.

Kamuro was looking at me indifferently.

And then she wouldn’t continue talking.

I thought that if we kept on avoiding the essence of the conversation, we would not move forward.

“There’s a rumor going on around by someone.”

“Yes. I’ve heard that someone is spreading rumors, everywhere.”

“I expect that one or more of those rumors contains something that is near the truth or it is actually true. This is the reason why Ichinose will not try to fight back even when she is hit by rumors or receives letters. Because, if she counterattacks, the truth she wants to hide will be revealed.”

“She thinks that if she continues to ignore it, in the end will remain nothing more than a suspicion.”

“Yes, but this is not the solution to her problem. If the person who is spreading the rumors knows the truth she wants to hide, they will eventually reveal something more concrete and she will be forced to admit it. It’s very likely that when it happens, she won’t be able to dodge it.”

The water started boiling so I poured it in a cup.

Then, I placed the cup of hot cocoa on the table.

But Kamuro did not reach to drink right away.

“You are not going to drink it?”

“I have a cat’s tongue, I can’t handle hot drinks”

I wonder how true this is.

“As you expected, Ichinose is now targeted by students who know what she wants to hide”

“You understand how. Sakayanagi said it in front of you, after all”

I remember that, of course, however Kamuro had no reason to tell me that herself.

Was this one of Sakayanagi’s strategies, as well?

“I am telling you that Sakayanagi does not know that I am here right now talking with you about this. She is probably going to get angry if she finds out.”

“In other words, you are betraying Sakayanagi?”

“That’s what I am doing”

“I am afraid I can’t believe you”

“I guess you are right. That’s why I will tell you the truth that Ichinose is hiding. After all, tomorrow or the day after tomorrow, the other students will probably know about it.”

So, that you, Kamuro can prove that what you said to me is true, right?

“But before that, why am I letting myself being used by Sakagayagi. I need to start with that story.”

“I know you are not interested, but you are going to listen, anyway”

It didn’t matter if I wasn’t interested. Since I was asked to listen, I was just going to hear her out.

Because if I wouldn’t she had no intention to leave.