A week after the entrance ceremony, was the first time that Sakayanagi approached me.

I stopped by the convenience store on my way back to the dormitory.

That was right after I headed out of the store after finishing my business.

A female classmate startled me as I was heading towards the dormitory.

“I enrolled recently here, so I wanted to have a little chat with you. Kamuro-san.”

“You remembered my name.”

“I have memorized the names and faces of all of my classmates.”

That being said, her movements were slow.

The walking stick that she was holding in her hand was more than enough proof that her legs were in a bad shape.

Arisu Sakayanagi – that was her name.

Since her handicap was apparent, I somehow remembered the name even when I had no intention of remembering the names of my classmates at all.

“Do you mind if we return together?”

In ordinary circumstances I would decline. However, although it didn’t have anything to do with her legs directly, it was hard to decline in this condition.

“Thank you very much.”

Smiling happily, she lined up beside me, speeding up her pace a little bit.

“But I won’t help you if you overdo it and fall.”

“It’s alright. I have my long-time-fellow stick with me.”

She answered, but her pace was not fast at all.

Even though I let a heavy sigh on purpose, Sakayanagi didn’t show that she cared.

In spite of her delicate appearance, her soul seemed to be shameless.

“Btw ———– What were you doing in the convenience store just now?”

“From what I could notice, it looked like you hadn’t bought anything.”

“So what about it? They didn’t have what I wanted.”

I was trying to cut this conversation short when Sakayanagi grabbed my arm.

“You were shoplifting, right?”

Sakayanagi asked, looking straight into my eyes. Her eyes sparkled as if she had just found a new interesting toy.

“Although I believe that you went for a careful inspection several times to grasp the location of the cameras, was this actually the first time doing this at our school? Or should I ask how many times have you done it, already?”

“Are you checking if I stole something?”

“Yes. Since you did not seem to be bothered by me, I was checking you. If I wasn’t sure, I wouldn’t ask you directly if you shoplifted or something”

So, Sakayanagi approached me after witnessing me on the crime scene.

“Even if did steal something as you say, what about it? Are you going to inform the school?

“Let me see. Reporting you to the school authorities is quite easy. But before we get to that point, please, hear me out”

Without making it clear if she had noticed my discomfort, Sakayanagi continued:

“You execution was brilliant. What surprised me the most was your calmness. Normally, people would purchase something cheap like gum or candy to lower the sense of guilt. However, it doesn’t seem to me that you are doing the same. This could be a proof that shoplifting became a routine in your case.”

What Sakayanagi was saying was right. After only seeing me in action once, she realized it was something that I was doing for a long period of time. But, what did that exactly mean to her?

I wasn’t planning on having a long conversation. But, the revealed truth of my efficient skills could not be erased.

I reached into my bag with my hand, pulling out a can of alcohol that I stole from the convenience store.

A thing usually not allowed to be sold to a person younger than 20 years old.

Something that only teachers and other staff of the school could buy.

I said to her, but Sakayanagi asked me something completely unrelated.

“Huh?… No. I don’t have any special interest in alcohol.”

“In other words, for you shoplifting isn’t an action to make your daily life easier, but it’s more of an attitude to savor the thrill and taste guilt .”

She continued analyzing my skills. 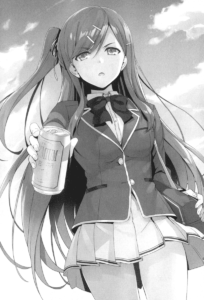 “Since you can analyze the situation so calmly, why don’t you hand me over immediately to the school?”

“Should I? For shoplifting, suspension is unavoidable.”

“Only, one week has passed since enrollment. You will have a lot of pleasant and unpleasant things to look forward to from now, right?”

“If you are not going to report it, then I will do it myself.”

When I tried to pull out my phone, she stopped my hand.

“I’m pleased with you, Masumi Kamuro-san. You will become my first friend.”

As she was saying this, she pressed my phone to close it.

“What are you saying?”

“Please, cooperate with me and I will keep your secret safe.”

“That’s not what being a friend is.”

“Moreover, is there any reason you think I will obey you diligently?”

“For sure, the damage would be insignificant even if I reported you to the school. However, with this incident, will be disclosed that you do shoplifting. If that happens, there would be a problem next time shoplifting occurs, wouldn’t it?”

“Are you saying that not only you’ll overlook it, but it’s okay to do more?”

“You’re free to decide what will you do. I won’t participate in that part. It’s impossible to reach your heart by bringing up that the criminal act is morally unacceptable in the first place. Am I wrong?”

“Nevertheless—- I think you won’t be bored with me. Maybe I’ll be able to fill up your spirit with other things instead of shoplifting.”

That was the first encounter between me and Arisu Sakayanagi.