At 5 o’clock, I called Kei to a place somewhat distanced from the dormitory.

Although it wasn’t popular, it wasn’t a place where people weren’t going to, either.

“Ah, it’s cold. Why did we meet up at a place like this? There must be other places as an option.”

“We can’t afford to meet in the lobby, can we? If someone sees us, weird rumors could start spreading around. Isn’t that what you worry about?”

“Well, yeah… But isn’t meeting in secret iffy? If they saw us like this, the rumors could start, anyway…”

“I feel like, you don’t care if we’re being cautious or not…”

It was fine. After all, the man who had been following me had to endure it, for a little while as well.

“Don’t you wish for winter when summer comes?”

After I said this, she thought deeply about my words.

Karuizawa snorted at my remark.

“By the way, I wonder if we have special test this month.”

“The training camp just ended, so it’s not weird even if we don’t.”

“Are you alright with the year-end exam? It’s considerably difficult.”

I noticed Kei’s movements stiffened when I said that.

Kei somewhat pulled through until here, but in terms of academic abilities she could not afford any further negligence.

“Teach me how to study.”

“Is it difficult to ask Hirata? I don’t think you can’t ask him.”

When it comes to Kei, she could shamelessly beg him right after the break-up, but it seemed like she rarely had an interest in him, anymore. She stared at me, intently..

The easiest thing was, to have Keisei tutor her, but it wasn’t the most realistic thing to happen.

If she was to be tossed, suddenly, into my group, problems would arise for sure.

“If it were in the middle of the night – would you be fine with that?”

“Better than being dropped out of school, right?”

It’s exactly as she said.

However, even with the year-end exam passing, new problems arrived.

In the following March, I was being on the watch, anticipating that big special test. But the month finished and the courses of the first year ended without problems.

The battle of not letting the guards down continued until the very last moment.

“So, what’s the matter?” She asked me somewhat nervously.

“Nothing special. I though you wanted to see me today no matter what.”

“It would be fine even if it weren’t today, but I managed to check something I wanted earlier.”

“Hmmm.” She gave me a look as if doubting something.

Without holding back, I decided to cut to the chase.

“Do you happen to know this number?”

I showed her an unknown number that called me the other day.

Kei pressed the telephone button and entered the same number manually on the keypad. If the caller were registered, the name should come out from the address book after entering it.

“I have a lot more contacts than ordinary kids, but I barely know any students of the higher grades.”

I had wanted to see if she would have the number registered, but, as I expected, it was just a slim hope.

“I tried a couple of times, but the other phone is always turned off.”

“Hmm…? Should I check it further, since it’s an important matter?”

“Yes, that was one of the reasons I wanted to talk with you. However, don’t do it carelessly.”

Kei nodded in agreement and saved the number.

I was trying to finish things up earlier, but Kei stopped me in a fluster.

At parting, Kei approached me, saying something strange.

“It’s probably not as easy as I think.”

“Answer straightforwardly without twisting the words.”

The sensation of a light box touching my head passed through my body.

“I originally prepared it for Yousuke-kun, but it became unnecessary.”

“What, are you objecting?”

“Nah, I was just thinking how awfully early you prepared for the Valentine’s.”

It passed more than one month since Kei had decided to break up with Hirata.

“Ah, I’m thoroughly prepared. Even if I decide to break up, it could be of an importance, don’t you think? But you probably don’t get it as someone who has zero experience of love.”

There could be truth in what she said.

“I thought you would think you could get it from me so I chose today.”

“Sorry, but I wasn’t thinking about that at all.”

Kei made an angry face just a little, but she soon turned back to her previous state.

“Btw, did you get anything from anyone else?”

Kei changed the subject as if she was trying to avoid something.

I answered, deciding it didn’t matter if I got anything or not at this point. 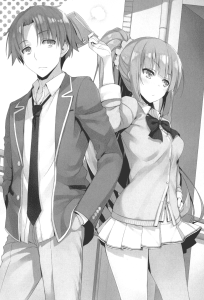 “A boy with zero matches – serves you right.”

She made a fool out of me instantly.

“But it’s alright – if you give me one I won’t have zero anymore.”

“You are still miserable. That means, you have turned to me, to save yourself from humiliation”

“Ah yeah, and you can thank me by returning the favor 1000 times over.”

She continued her extreme nonsense.

Once again Kei was trying to change the topic. She said those words while looking into my eyes, however, she swallowed her words.

Standing at a short distance, we made an eye contact. I slowly turned my gaze away and turned towards the direction of the dormitory.

Saying this, Kei immediately headed towards the dormitory.

I put the present inside my bag right away.