Developments began to move at a dizzying pace.

It seemed that there was no special exam going to happen any time soon, and there was a wave of turbulence happening at that time when we should concentrate only on the written exam at the end of the school year, it was late February, after all.

Three days after the provisional test, Friday the 18th of February.

The students of three classes, excluding Class B, gathered at a place away from the school grounds.

Due to the importance of the upcoming exam, there was also Hirata’s move to try and stop the flow of the rumors even on the brink of time but his efforts were futile and the rumors had already spread out.

There was also Class A, that nothing about them had been written in the bulletin boards, but,  they had already grasp the info about the other classes.

“Yo! Ishizaki, what did you want to talk about?”

Class A, Hashimoto asked Ishizaki in the same way as usual.

“What I wanted to talk about, you say? Don’t give me this, Hashimoto! What are you doing by bringing Kitou? I told you to come alone!”

“Well, you brought Albert along with you. It’s is just a precaution”

The situation between the two was tense 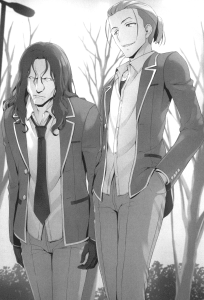 This scene made hard to believe that these two used to live together until very recently, during the training camp, but i guess these kind of things are only natural.

“We invited you here today so we can talk. Isn’t that right, Ishizaki-kun?”

Ishizaki and Albert weren’t the only Class D students that had come to participate in the conversation. Hiyori and Ibuki had also come along with them.

“As long as they are able to control themselves, it will be alright, somehow”

Hiyori’s concern was not unreasonable at all.

It’s highly unlikely that nothing will happen when you have that kind of a line up.

“But what’s up with those faces? I did not know that you called other students, besides us”

Hashimoto let out a sigh while watching us.

“I don’t know. Aren’t you the ones calling them?”

It seemed that both Class B and Class D were feeling uncomfortable around us, Class C.

That voice came from right beside me, it was Akito with the rest of the Ayanokouji group.

The members were going to gather in a cafe and study there.

“The other day I remembered the time when Kanzaki and Hashimoto were going at each other ‘by chance’. I saw them leaving the premises and I thought that… maybe”

When I told Akito that I felt a disturbing atmosphere, he joined immediately. However, what was unscheduled was that Haruka, Airi and Keisei were together, too.

“Certainly, there are a lot more people than the last time, so many things might happen”

“Jeez, why is this terrible situation is happening, again?”

Said Haruka dumbfounded by the situation.

“Well just leave it. It doesn’t mater who called whom. Let’s hear what do you have to say, Shiina san.”

“It’s about the rumors. You guys from Class A are the ones who posted them, right?”

Hiyori asked as if she decided to not let Ishizaki turn this into a fight.

“Hey, hey! Why are you asking us something like that?”

“Please, leve this to me, Ishizaki kun”

“I heard a testimony. I was informed about what you told Kanzaki-kun when he asked you about Ichinose’s rumors”

“What a blabbermouth. Could it be that you heard it from these two over here?”

That was about me and Akito since we were the ones who heard the exchange between Kanzaki and Hashimoto.

Hiyori asked Hashimoto without turning to face us.

“… Well, Ayanokouji and Miyake over there know, already, so I’ll be frank. I just spread the rumors that I heard for Ichinose from here and there. I am not the source of these rumors.”

Of course, Hashimoto would never admit the facts.

“That’s a convenient excuse. Do you think that we will accept this?”

“Excuse? It’s the truth. Well, I guess it is bad of me to spread it around just because it seemed amusing, but it’s still strange, isn’t it? That the students from Class D would come along and involve themselves into something that they should be entirely unrelated to?”

“Or could it be… That it was you Class D who initiated these rumors?”

“Stop bullshitting us!! We already know that it is Sakayanagi the one who started these rumors!”

“Don’t just jump into conclusions. It may be true that the leader of our class is belligerent. There were also times that she made provocative remarks against Ichinose. I do not understand why you want to read it deeply and decide that she is the source of the rumors. But it’s irrelevant. There’s no evidence, right.”

Ishizaki got frustrated by Hashimoto’s words. But what he said was not incorrect. The letters that had been sent in our mailboxes, the rumors that had been posted on he bulletin boards, so far there was no concrete evidence that it was Sakayanagi, although in all probability it was her.

“That’s why, I came here today to ask you those questions. But I didn’t know that you guys of D Class would support Ichinose”

Hashimoto exhaled a deep sigh as he saw Ishizaki and the others glaring at him.

“It’s no use playing stupid, Hashimoto. Not only did you guys go and spread rumors about Ichinose, but then you even had the nerve to go and stir up shit about us as well.”

“I see. So that’s the reason after all. You guys don’t really care about the stuff with Ichinose, do you? You’re just upset that Class D got swept up in the rumors. Oh yeah… I heard you were sent to a youth detention center, because of some nasty things you did back in elementary school, isn’t that right, Ishizaki?”

The moment he was provoked, Ishizaki lost his temper completely.

Hiyori quickly grabbed Ishizaki’s arm and squeezed as he was about to attack.

One of the lies that had been written over the bulletin boards was about a student that had scammed his classmates in elementary school and served in a youth detention center.

When such a rumor is circulated it is only natural that Ishizaki cannot remain calm.

This short of outcome was inevitable.

“I wonder, how could you come up with such rumors. It’s not only about Ichinose, you also investigated about people from other classes.”

Akito who thought that Hiyori alone could not surpress Ishizaki rushed to stop him.

“Dont try to stop me, Miyake! I won’t let A Class bad mouth us like this, any longer!! I’m gonna knock him to his feet!”

“You’d better stop, Ishizaki. What if you hurt yourself? You may have confidence in your fighting skills, but this is not the right place, okay?”

Kitou quietly stepped forward and raised his fist against Ishizaki and Alberto.

Depending on the situation, it looked like he would accept their challenge, even in this place.

“Stop it, all of you. I think you know that this school is very strict when it comes to fights”

From a distance Akito’s voice called to calm down.

“I heard that the current student council president might turn a blind eye to the little disputes, just like this one?”

Hashimoto narrowed his distance and extended his right foot towards Ishizaki. Miyake caught it with his left hand.

Hashimoto’s words “disengage in fighting allowed” weren’t to be trusted. That’s why he tried to prove it by taking the initiative himself.

“Very good, Miyake. Now I understand why you were so confident that you could stop us from fighting”

Hashimoto fell back and took his distance.

The atmosphere became more tense than before.

“Fighting is not allowed”

“I know. I didn’t come here to fight.This is to prove that we have the power to defend ourselves, if necessary.”

Hashimoto looked into Hiyori’s eyes and nodded, but no one trully believed him.

“Give it up, Hiyori. These guys lie without hesitation. No matter how you look at it, the rumors were spread by Class A. It’s obvious because Class A was the only Class that wasn’t targeted by rumors.”

“That’s why… that’s exactly why there’s a possibility that they are not the culprits?”

“It’s just as Shiina-chan says. If we were the ones that posted the rumors, wouldn’t we have also posted some lies about Class A on the bulletin boards so that you would not suspect us?”

“I am not sure. I don’t think that everyone in Class A would know that Sakayanagi is the mastermind behind the rumors about Ichinose. If A Class wasn’t informed ahead of time, when the rumors were spread, that would naturally cause confusion.”

Hashimoto let out a sigh as Akito was pointing that out.

“Well, I cannot say that you can’t make such a deduction. But in the end is just proof of the devil, my dear.”

His stance was very suspicious but we had no concrete evidence. At the same time, it was also difficult for him to prove his innosence.

“Hey, let’s stop this, Ibuki-chan. It’s no use fighting.”

“Telling me to stop after picking up a fight yourself is too much, dont you think?”

“We have nothing to do with this. Believe us”

Hashimoto said that with a smile, but Ibuki didn’t smile at all.

Rather, it seemed that she was holding back her anger.

This Ibuki was also swept away by the same “lies” as Ishizaki.

“Do you really think…..that because Ryuen is no longer our leader, you have the right to underestimate us?”

Ishizaki finally reached his limit and pushed Miyake to the side.