February the 14th, Valentine’s Day. On that day, I had decided to take a break during lunch time and deal with Hashimoto, who continued to follow me after school. I had predicted that Kei would give me Valentine’s chocolate, so I decided to use this to my advantage.

If Kei were to give me chocolate, it would be either early in the morning or late in the evening. Not during the day, between classes. She had only just broken up with Hirata, so there was no reason for her to carry chocolates around in her bag. For her, the simple act of handing chocolates to someone would be enough to cause a huge fuss in the first place. I also had intentionally turned off my cell phone from the night of the 13th.

The chance of her carelessly coming into contact with me was effectively zero. Still, I opted to turn the phone off anyway in order to avoid having to make an excuse about saying that meeting in the morning was inconvenient. It had to be very natural when we met.

Hashimoto also was feeling impatient that he was unable to achieve great results.

So, I decided to give him a hint.

That was my secret meeting with Kei to receive Valentine’s chocolate from her. I chose the meeting time at 5:00 because Hashimoto’s tailing always continued at least until about 6:00. As expected, Hashimoto was marking me. The security camera in the lobby would show me coming out.

Ever since he had started tailing me, this was his first inexplicable opportunity to make contact, so he boldly confronted the two of us in person. Well, the result would’ve been the same even if he had simply sat back and watched.

Hashimoto seemed satisfied with the conclusion that Kei might have been the person I had been regularly coming into contact with.

From the next day, Hashimoto was no longer following. She shifted to preparing for her school year exam. And from that day I could move freely.

I went to school with the Valentine’s chocolates from Kei in my bag.

I met with Hiyori Shiina at the library. Of course, most of our conversation was about books. But the subject of my interest was entirely different.

Our conversation was a foreword about the myriad “rumors” that would be played out tomorrow.

A Class might be trying something other than Ichinose’s rumors.

I decided to plant such a seed. And the seed would flower a few days later.

Choosing small targets like Ishizaki and Ibuki for rumors would create an instantaneous situation. This was a bonus. Whether it had to be a good or bad development, there would be no difference. The important factor was the one thing after this. How and when to write on the bulletin board.

I contacted the person holding the key. Vice President Kiriyama.

After talking with Hiyori at the library, I met Kiriyama at the school building after most of the students had already gone home for the day.

And confided everything about my plan. A strategy to save Ichinose.

“I see. So you’re telling me to post the rumors from my mobile phone? There is no merit for me, from all of that.”

In fact, Kiriyama had never asked me to do anything.

“Of course. I have doubts about your ability”

“Yes. Therefore, consider this to be a loan rather than a favor. That way, in case of an emergency development later on, it’ll be easier for you to rely on me. Besides, making the post on the forums wouldn’t be all bad for you, Kiriyama.”

“Ichinose Honami is an important student for the student council. It would be unfortunate for you to lose her. If you post the rumors on the forums, you’d be able to protect Ichinose by getting the school involved.”

“But if I involve myself with a first-year problem and post the rumors, it would bring the credibility of the student council into question.”

“What’s wrong with that?”

“That’s stupid. It will be a big problem if they find out that the rumors on the bulletin board were written by me. Not only would I get a penalty from the school, but I could also be dismissed as vice president by Nagumo.”

“Can’t you please handle such an issue with some skill? You are competing against president Nagumo, aren’t you? Or, are you saying that you’re already incapable of opposing the student council president?”

Kiriyama’s angry eyes pierced through me.

“According to the former student council president, Kushida has already come in contact with president Nagumo.”

“Why do you…… Horikita-senpai’s really placed a lot of trust in someone like you, hasn’t he?”

“She is one of the most well-informed students in her school year. In other words, the rumor that she’s talking about through the bulletin board could be explained as a strategy of her to leak information to the student council president Nagumo. We can make a fantasy story like that.”

A story where Kushida had provided Nagumo with info, then Nagumo in order to save Ichinose gave the according directions to Kiriyama.

Such an inconceivable path emerged faintly.

“… Are you telling me that you have contacted me after thinking that far ahead?”

Kiriyama was thinking. The possible outcome if he were to make these posts on the forum.

But, this still wouldn’t be enough to get his approval.

These words sounded like a threat, but it was a decisive factor for moving Kiriyama.

If we made the posts in a different time, it may have been written from a mobile phone other than Kiriyama’s.

Of course, that would be okay, but I would like to minimize the risk of future plans being out of order.

Above all, it was necessary to keep in mind that Kiriyama should be the one to leak this to third parties.

“Thank you very much” 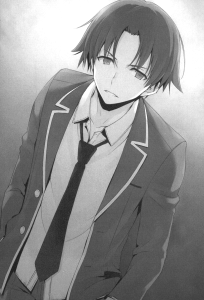 I displayed the text of rumors for each class on my mobile phone and let Kiriyama type it. With a working time of about 10 minutes, this process was completed. Well, no students would notice right away, but the rumors would spread until tomorrow.