The day of the end of the year school exam arrived.

Based on the practise tests, each of us had made their own preparations.

According to Horikita’s report, Sudo, Ike and Yamauchi seemed to be doing their best. It seemed like she had thoroughly drilled test preparations into their heads for a week.

As for Miyake, Haruka, Airi, and Kei.

I was able to raise the standards of the students around me good enough.

All other students were covered by Hirata.

There were no reports of students having problems, so if everyone only focused on their physical condition, the students from our class should be able to overcome this.

At that time, footsteps rushing from behind me slowed down beside me.

It was Ichinose who approached with a bright smile.

“Today, finally it’s the end of the year exam. Have you studied, properly?”

“More or less. In your case… I don’t even have to bother myself by checking”

It was no surprise that Class B worked together far more than we did to prepare for the test. Ichinose, who had been absent until very recently, would have nothing to worry about in terms of her studies.

“Yesterday, Ichinose, you were really cool. You were even able to charm a guy like me”

“You think so? As Sakayanagi-san says, I am just shameless.”

In the first place, Ichinose was not guilty. It was not even a problem as her mother had treated that incident properly. It was nothing more than a sin that she kept carrying.

“All thanks to you, Ayanokouji-kun, who helped me recover.”

“Well, I cannot be as worried as your B Class classmates. I just wanted to listen to what you wanted to say. It’s not something to be thankful for.”

“Hmm… If it wasn’t for you, Ayanokōji-kun. I think I would’ve ended up self-destructing, just like last year and fall apart. In that sense, this time, I was completely defeated by Sakayanagi-san”

Sakayanagi had complete control of Ichinose and sent her on the verge of destruction.

Certainly, without my intervention, I honestly can’t think of what could happen.

However, there were things that should not be misunderstood.

“You can’t be too grateful. I was just the trigger. In the end, you’re the only one who can overcome your own past.”

“Yes, that’s right. What I have done cannot be undone. No matter how much time has passed, there may not be a day when I feel like I am innocent. But… from now on, I can live my life facing it head on. I am sure of it.”

It should be all right now. No matter who is blaming her, Ichinose will probably be able to stand up.

One thing that was a given, after all this, is that Ichinose would grow stronger than everyone.

In the future, it would have become a stronger competitor to other students than ever before.

But, still. There’s nothing absolute in life.

“If you’re about to lose yourself, again, you’ll just have to talk to me.”

“When that happens… Let’s see… I should at least be able to hear you out.”

When she emphasized that, I nodded a little perplexed

And when I did, she thanked me quietly.

This was a rather unusual reaction for Ichinose, who was usually always cheerful.

She shook her head, perhaps because even she thought it was strange of herself.

“But then… Won’t you someday regret it?”

Ichinose asked me that while peering at me.

“Hmm, that’s correct. It would mean we’d be stuck being Class B. If you Ichinose and the others manage to graduate as Class A, my classmates may end up blaming me.”

With a bitter smile, Ichinose  scratched her cheek.

“For the time being, at least keep it a secret from Horikita.”

As Ichinose was walking beside me, she straightened her back.

Just like that she was bright and cheerful as a newborn, again.

Now then, all that was left was to overcome the end-of-year exam.

Ichinose was quietly, looking at me.

“You’ve been staring at me for a while now. If you have anything to say, I’ll hear you out.”

As Ichinose said this, she stared at the student in front of us.

Looking at the figure and those surrounding him, it was obvious at first glance who it was.

“Excuse me, I’ll head over there for a little.”

At once, Ichinose left me and caught up with the student before us.

“Honami, huh? You are quite energetic, early in the morning”

“Because that’s just who I am”

Nagumo may have been surprised at Ichinose, who was smiling the same, as before.

“Don’t you resent me, Honami?”

Why? Ichinose tilted her head curiously.

Soon she realized the meaning of his question.

“I don’t want to be remorseful, I’m just thankful to you, Student Council President Nagumo. Thank you very much for bringing me to the student council. I will keep doing my best in the future too, so I look forward to cooperating with you.”

“I see, it looks like you have been doing much better than I expected.”

Nagumo looked at me for a moment, but immediately turned back to her and walked away.

It was not hard to imagine what his gaze was telling.

A plan to destroy Ichinose Honami and then regenerate her with his own hands. Then he would tame her as his own pawn. That look was meant to tell me his displeasure at how I had gotten in the way of that.

He must have known that I was involved in this matter.

Ichinose bowed to Nagumo and came back to where I was standing, right to my side.

When she came back, Ichinose called out to me with a particularly loud voice.

She opened her mouth wide and tried to continue talking.

While saying so, she put her hand in her school bag and froze up.

She seemed lost, while moving her arms in her bag, but then as if she had made up her mind she took out something.

And then she handed it to me.

“I am a little late but, here, Valentine’s chocolate… Would you accept it? I mean, I’ve never handed this kind of thing before, but… I guess this is the only way I can express my gratitude, so…”

“You don’t have to force yourself to give me something in return, you know that, right?”

The 14th had already passed, but it didn’t exactly feel bad to receive chocolate from a girl.

However, I had not done all this for the sake of receiving chocolate, so there was no need for her to force herself.

We would draw attention if the chocolate was about to be in the open for a long time.

So, I gratefully accepted the chocolate from Ichinose. 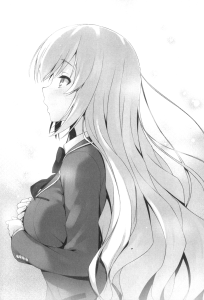 Part 4 The weekend had passed, it was the 21st, already. The end of the year exams would begin that coming Friday. However, even on Monday, Ichinose did not show up at school. Meanwhile, Kanzaki, Shibata and her other...