Classroom Of The Elite : Volume 9 (Prologue) – The Monologue Of Ichinose Honami

I have never thought of myself as a good person or as a bad person. However, just like my mother’s wish, I have managed to be honest with myself.

I had a quite comfortable life in elementary as well as in junior high school, too. I had plenty of friends, both, girls and boys.

I wasn’t good at sports but I was putting so much effort as I did with my studies.

When I was at my third year of junior high school, I was able to become the president of the student’s council, something I had longed for.

I was even offered a scholarship to enroll as a special student in a private high school.

The angry face of my mother that had collapsed from her illness. The tears.

The sorrowful face of my little sister who got hurt and what was left of her was just a shell of her former self.

It is impossible for me to forget. Even, now. I still remember that time.

My heart dyed in black

I wasted half of my third year of middle school as a student. For half a year I made myself live as a social recluse.

But all this ended on a certain day.

When I found out about the existence of this school, I thought I had to end this.

So, that I can bring back the smiles of my mother and my younger sister once again.

That’s why I won’t run away from my ‘answer’

I will face it head on.

Yes, I made an oath 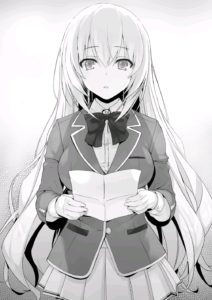 At this school that I entered having a dream, I was facing a trial already.

I was looking at the letter and my whole body stiffened.

All around me, my classmates are looking at me with curiosity.

I read the only one sentence written in the letter, over and over again

No matter how many times I read it, the words never change

‘Ichinose Honami is a criminal’

The girl was very nervous long before the incident happened.

In the student council room on a day off

She dragged her voice from the depths of her throat

“What did the student council president tell you?”

“That it is not the time, yet”

However, President Horikita interviewed Ichinose and rejected her application for entering the student council.

Ichinose who was strongly hoping to get into the student council, felt disappointed, as soon as Vice President Nagumo heard about this, he approached her immediately.

There are three reasons behind his move.

The first and most important is that she belonged to Class B, much like himself, rather than in Class A.

Another one reason is that her academic skills were excellent.

And the last one is that she is extremely good-looking. Something that Nagumo seeks in the opposite sex.

In Ichinose’s case it was enough that she fulfilled the last criteria. The first two were nothing more than a bonus.

What was important to him is whether her value is enough for him to keep her by his side as a personal property.

“Yes. That’s why I wanted to join the student council at this school, too”

Ichinose told the truth. And also a lie.

“I learned from your homeroom teacher, Miss Hoshinomiya that your entrance exam results were also outstanding”

“Thank you very much”

She accepted his praise meekly.

But she could not look Nagumo in the eyes

“To be honest you are quite excellent”

“But… President Horikita did not acknowledge me…”

It is because she thought she still could join the student council. Her smile still remained, even barely.

In addition, she thought, she wouldn’t give a good impression to him here, if she was keep being depressed.

“President Horikita is a very strict person. He did not accept your application probably because you are not from Class A. That person regards as extremely important the ranks.

That was a lie that Nagumo told.

At first glance, Horikita Manabu seemed to be very particular about titles and ranks. However the truth is the exact opposite.

He sees at the very essence of each person. He is the kind of man that evaluates talent no matter if anyone comes from Class D or Class A.

But for the vulnerable Ichinose who had just been rejected, Nagumo’s words sounded like the absolute truth.

“So, in order to join the student council, I have to get promoted into Class A?”

“I don’t know. Even if you promoted into Class A right away, Horikita may or may not accept you. The point is that when you enter this school, you are not considered automatically to be up to par. No matter how hard you try, Horikita will never accept students who have been judged to be a part of Class B”

The slight smile from Ichinose’s lips disappeared after that cruel announcement.

“B… But Nagumo senpai you are from Class B too, right? And you are the Vice President, so…”

Nagumo extinguishes that slight hope of hers.

Ichinose’s face had a cloudy expression

Seeing that Nagumo, felt a joy in his heart.

“There’s one more thing. I am fully aware of my potential. I am proud to believe that I should normally had been assigned to Class A. That’s why when I applied to enter the student council I confessed everything behind my assignment to Class B. I spoke the plain truth”

“Yes. I proved to them that I am not inferior to Class A. And that is exactly that led me to my current situation.”

“To confess the cause as to why we were put on our respective classes…. What was it for you, Nagumo senpai?”

Nagumo chuckled to himself

“I’m sorry, but I’m not going to answer. Now, it’s you who will be inquired, Ichinose.“

“You know, I’m not quite convinced. When I think more of it, it’s reasonable for you to be assigned to Class A. Your excellent grades and communication skills are not to be criticized. You were also a student council president. But putting you in Class B? There must be some reason behind it.”

Ichinose couldn’t hide her trembling from Nagumo’s sharp observations. But this was deducted based on the information that Nagumo obtained beforehand from Hoshinomiya, who was Ichinose’s homeroom teacher.

“Tell me here and now what do you think is the reason. If you convince me that you are worthy of being in Class A, with my responsibility I’ll let you enter the student council.”

“It that… Even possible?”

“Those who can’t catch this chance aren’t capable of entering the student council.”

Ichinose had a dark secret that concerned her. The memories of the half of her 3rd year in junior high, spending her time in her room came back vividly.

“Of course, I won’t reveal it to others. Your secret will only be between you and me.”

The past lingers, keeps living on without anyone else knowing about it.

We have to trust others, especially when we lose faith in then.

About her own mistake.