Digital Charts 101: A K-Pop guide to the charts

by Mogwai
in Featured, Korean Entertainment
0

Roof hits? All-kill? Perfect all-kill??? Really, none of those things made a lick of sense to me when I first got into K-Pop. Even some sites still get them mixed up (some claim it’s on purpose but I’m not assuming anything). But don’t worry, this post will cover most of the essentials to understanding how digital charts work.

South Korea has several music charts. I’ll go through most of them briefly first. 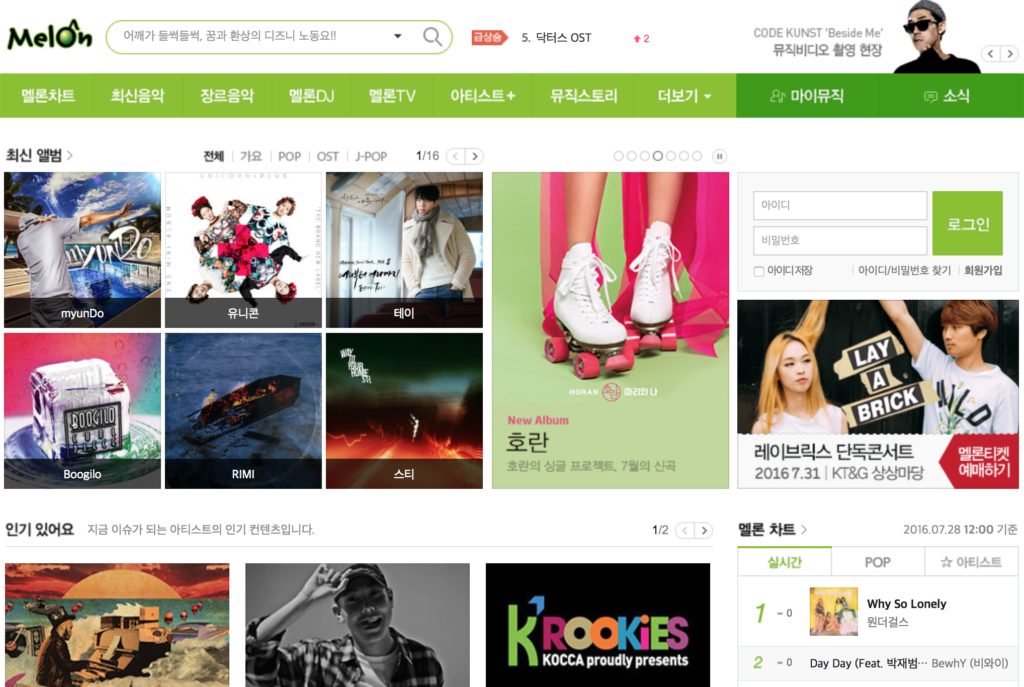 MelOn is the biggest, most popular music service in South Korea. This is the one chart that K-Pop fans pay most attention to, and for good reason. MelOn boasts over 28 million local users (and some extra international fans like myself). That’s a good half of 50 million South Koreans.

MelOn is supposed to be short for Melody On, in case you were wondering why it appears to be named after a fruit. 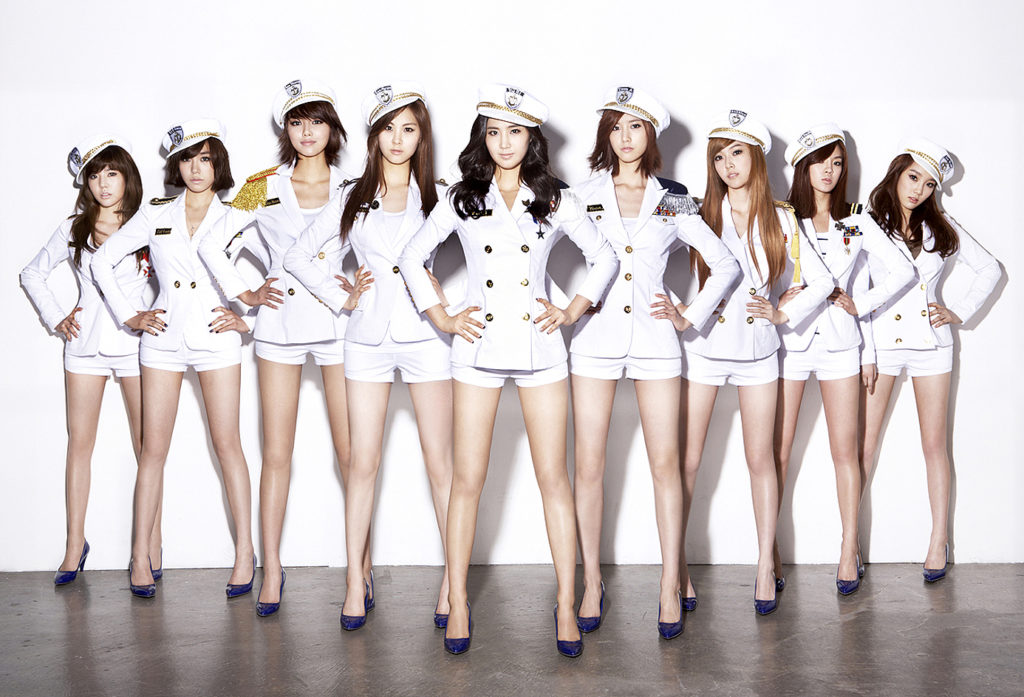 Sometimes there are songs that aren’t released across all digital charts. For example, songs from King of Masked Singer are only released via Bugs Music. They will never get all-kills for obvious reasons, but sometimes they can explain why certain songs that are #1 on the biggest music chart aren’t also #1 elsewhere.

Other times, the charts are just that irrelevant, like the ones in the next category.

These two were a random mess, and this thread demonstrates that perfectly. All these inconsistencies didn’t really provide us with any useful idea of how much of a hit the song is with the general public, especially since they held a small percentage of music listeners in Korea.

Moreover, SM Entertainment didn’t release their songs through Cyworld, which once prevented SM-released songs from attaining all-kills in any shape or form. Now they can though. Moving on.

This OneHallyu thread sums up most basic digital chart terminology pretty well, including roof hits, and I quote:

“Not merely hitting #1, but being an extremely dominant #1. It used to be much easier to hit the roof multiple times on MelOn before they changed their formula.”

Big Bang and SISTAR hold the record for groups with the greatest number of roof hits, at 241 and 104 total roof hits respectively.

iChart aggregates real-time scores across all digital charts in South Korea every half hour. As long as bugs (not the music chart) don’t occur anyway. It’s also on Twitter.

Now comes the slightly trickier part: differentiating All-Kills. Again, the thread earlier explains them all effectively, but let’s go through this using releases from 2016 so far instead. It’s actually pretty easy to understand. AK and PK (also known as CAK and PAK) are the only two certified by instiz iChart, but a realtime all-kill is impressive regardless. Let’s go!

#1 on all real-time charts 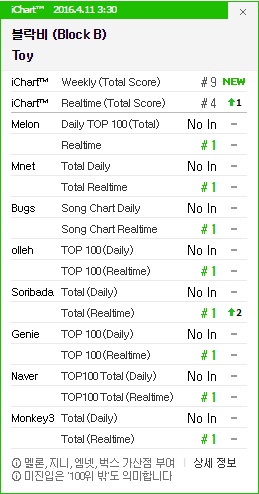 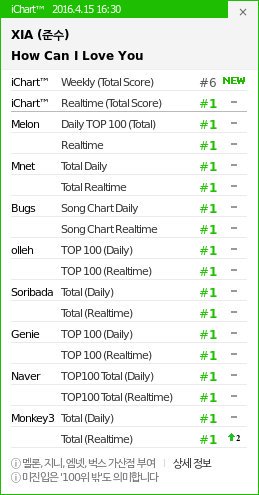 #1 on every single possible chart including weekly 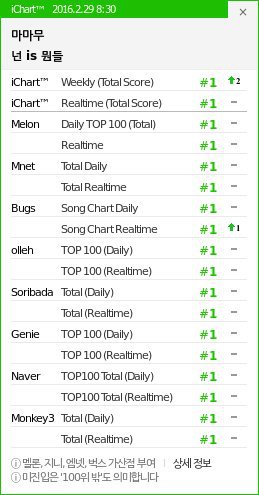 Finally, we’ve come to Gaon Digital Chart. This one aggregates digital charting, including downloads, streaming and background music, across all Korean music services, on a weekly, monthly and annual basis. This allows us to track the song’s longevity on the charts beyond short-term real-time performance. Here are the top 100 songs from 2015’s Gaon Top 100 Digital Chart. 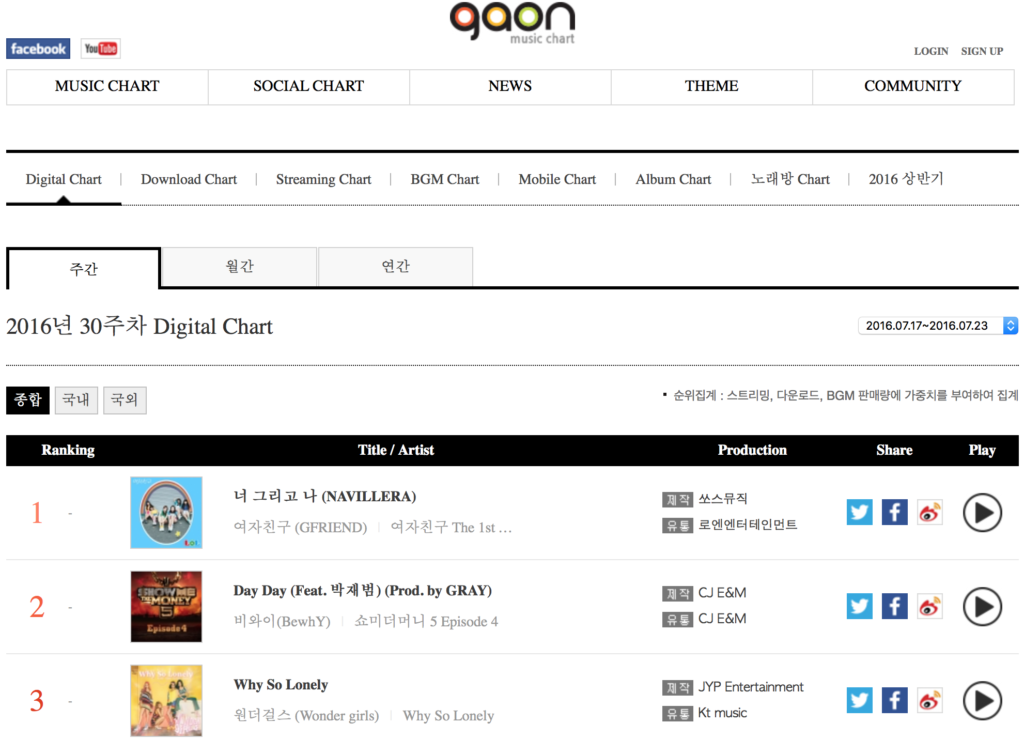 Why do K-Pop fans seem to look at MelOn rankings all the time instead of stepping outside their houses every now and then?

Obsessive digital chart monitoring is definitely a pain in the ass. But digital charts are critical to K-Pop artists nonetheless, especially with the recent decline of physical music formats like CDs. Charting high can be a sign of a complete game changer because it means that the general population is actively checking the songs out and listening.

Some groups have fans buying their physical album releases in droves, and yet could never make as much of an impact on the charts because ultimately the general public isn’t listening.

Girl groups have had better history at digital success. Even those outside of The Big 3 (SM, YG and JYP) such as SISTAR, T-ARA, GFriend, APink, Mamamoo and EXID have achieved various states of all-kills in the past. Their better odds at digital charting is one of the reasons why 2015’s summer girl group war was beyond entertaining, honestly. The fanwars with every chart update served hilarity.

This year, most JYP Entertainment female artists, including Twice, Baek Ah Yeon, Baek Yerin and Wonder Girls, have had an excellent run with digital charts so far. I wish I could say the same for YG Entertainment’s only girl group 2NE1 (depending on BlackPink‘s fate) this year, but I suppose I will always have Crush.

Meanwhile, boy groups tend to show lower numbers digitally. SM male groups such as TVXQ! and Super Junior sell physical albums with absolutely no sweat at all, but haven’t had as much luck digitally.

Not all is lost for boy groups though. Groups like Block B, Beast, and Big Bang are bigger digital contenders. Big Bang is an obvious one; G-Dragon’s level of superstardom alone trumps most idols. Winner and iKON’s respective debuts were also stellar. SM groups like SHINee and EXO have been able to break out of the SM boy group digital curse and perform decently on the charts. It should be noted that Super Junior’s Kyuhyun was actually able to impress local audiences as a soloist with his chart-topping solo debut At Gwanghwamun.

Idols aren’t the only contenders in the Korean music industry, which is why names unfamiliar to some international fans often end up topping digital charts. Non-idol acts that do well digitally include Korean R&B/hip-hop figures like Yoon Mirae, San-E, Crush, and Zion.T, indie musicians like Busker Busker and 10cm, as well as popular ballad singers like Im Chang Jung, Naul, and Park Hyo Shin. YG Entertainment’s sparse releases also continue to be a digital force with Akdong Musician and Lee Hi‘s comebacks.

Basically, you gotta brace yourself and grit through it if your favourite isn’t getting All-Kills. Embrace it, or let it roll off your back. I hope this post will be useful to you. Remember that you can always mute that iChart Twitter account when a random music chart won’t let your favourite live.

The end-of-year lists have recently been published by Gaon. The first section begins with a short review of chart-toppers before moving to the next section, which covers certifications. For those who are interested in further reading, extras are mentioned...

Gaon's Quarter 1 report came out not too long ago. The results show that TWICE and Red Velvet are leading the pack for girl groups, appearing in the top ten for both digitals and physicals. Hot trend BTS also...