After its first serialisation in ‘Weekly Shōnen Magazine’ during the summer of 2006, Fairy Tail’s manga continued for a ground breaking 11 years before coming to an end on the 22nd of July 2017. During its lengthy serialisation, the manga garnered a large fan base of avid readers that felt an attraction to the initial story of Fairy Tail, including myself. Due to its success in early years, Fairy Tail had the chance to be brought to life as an anime series, which overall has 277 episodes and counting. It’s final anime release date has been set for 2018, which brings an array of bittersweet emotions to many who have been following this series from its beginning.

As someone who has been following the Fairy Tail franchise for years, the sudden news of its end seemed both shocking but understandable. I found myself hoping for a concise and complete ending that would finish off on a good note for its fans. What I was given, however, failed to do so – in my humblest opinion. This review will focus on the story, characters, plot progression and overall enjoyment the Fairy Tail manga consisted of.

The story revolves around the existence of magic in this alternate universe, and wizards having the capability to yield this magic and use it to their advantage. We hone in on our main characters, Natsu and Lucy, fairly quickly during the beginning of the manga and become acquainted with the mages stationed at the guild Fairy Tail. Like various other shonen mangas, the main story follows the wizards of Fairy Tail using their various forms of magic to subdue evil and maintain peace in Fiore.

At first glance, this seems like the perfect premise for a strong, interesting and hugely successful manga to be forged from. However, Fairy Tail is far from that – many in the manga community look down on Fairy Tail for it’s lack of plot and use of generic tropes. The story itself starts off strong, with arcs such as the Tower of Heaven and Oracion Seis’s plot lines having the perfect balance of angst, power-ups and fighting scenes throughout them. However, along the way, Fairy Tail fell victim to a fatal flaw; plot holes and plot armour. While it revolves around the already strong dragon slayer Natsu Dragneel, he becomes somewhat impossible to defeat by the end of the series, no matter how over powering his adversaries are.

What started off as an interesting, magical story turns into a repetitive onslaught of ‘friends and family grant me more power than you could ever possess’. No matter how strong Fairy Tail’s foes are, they somehow overcome them. This is all well and good if it only occurs once, but Hiro Mashima constantly falls back to this trope in Fairy Tail battles. As the series grew longer, enemies grew stronger and the probability of a friendship power up occurring only heightened. This made the development of many of our protagonists fairly unbelievable and unrealistic.

The story as a whole had no variation, and plot armour meant that emotional scenes where our favourite characters were on the brink of death turned into a phenomenon which most readers were desensitised from. Many arcs held various potential, but fell short in the surprise factor. In the end, Natsu would just use his dragon slaying powers plus his love for his friends to bridge the power gap between him and his adversaries. A heartwarming prospect retrospectively, but one that just didn’t work well with the world of anime – especially in such a popular series. I personally had a strong attachment to this series as it was one I discovered in my youth and followed for years. As I grew it became a part of my routine, and waiting for manga chapters was an activity I savoured, the excitement bubbling in my stomach only satiated with an update. However, though the name ‘Fairy Tail’ holds such sentimental value to me, even I can’t ignore glaring problems regarding the story of this manga.

One issue in particular that confused me regarding this manga was the threat posed by not one, but two antagonistic characters in the series; Zeref and Acnologia. They were essentially the strongest dark forces against Fairy Tail and the whole of Fiore for the terrifying threat they posed. Zeref even had various arcs revolving around him; if it wasn’t for his existence the Tower of Heaven arc, Tenrou Island arc and the Tartaros arc wouldn’t have occured. These plot lines made the hype for his power all the more greater, showing just how strong of an opponent he was to Fairy Tail. Acnologia also made an appearance in both Tenrou and Tartaros, and though it was brief these encounters ramped up the hype surrounding these two antagonists. However, when the time came around for Fairy Tail to actually battle these two villains, the acclaimed ‘strongest’ evils in Fiore, tragedy struck. 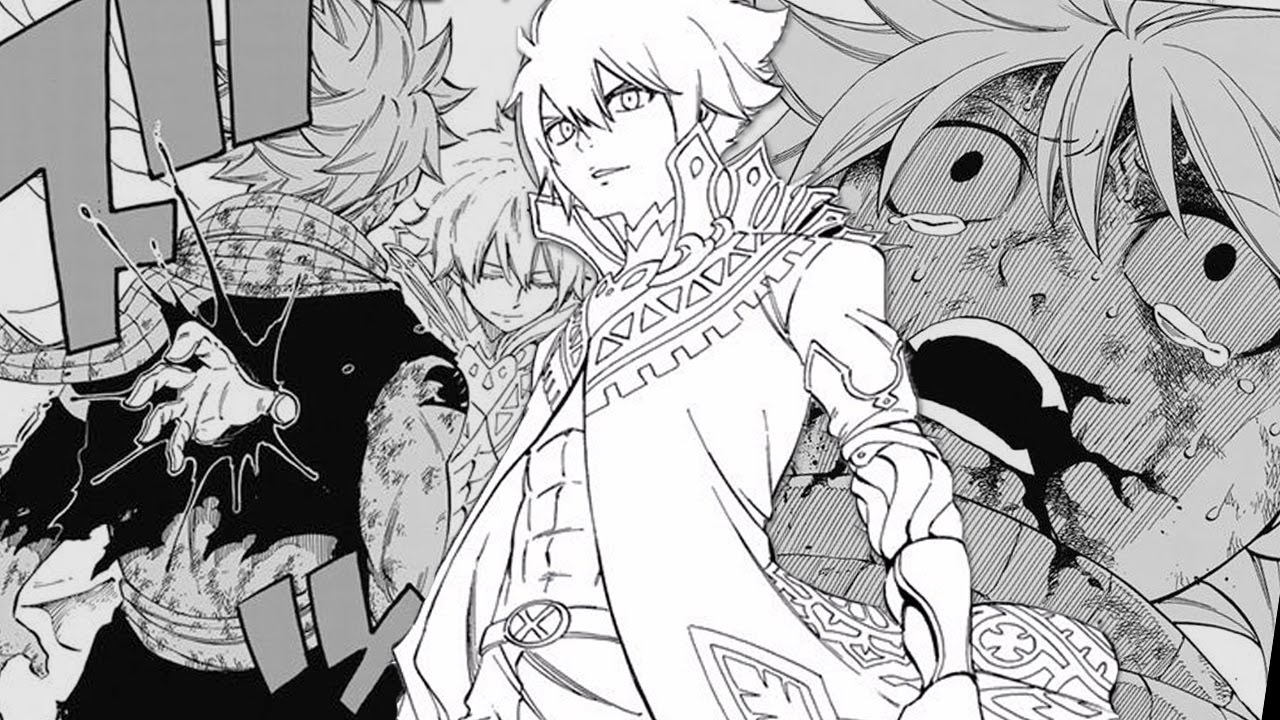 Tragedy being the most underwhelming conclusions to a villain’s demise I have ever read. Zeref seemed simply unbeatable in the Alvarez arc, stating various times that unless Natsu was harboured in his E.N.D form, he would fail to kill him. This was a realistic prospect; the truth stated that Zeref was, indeed, immortal. Adding to this, Zeref succeeding in powering up to his God form, now holding a level of magical power one can only dream of – and I mean this literally, as Hiro Mashima never let us see the true capability of this new magic. Zeref looked absolutely glorious in the moments where he revelled in his new form, and seemed fairly unstoppable as he tried to use the Ravines of Time – a newly introduced prospect in the Fairy Tail world – to rewrite history itself. Looking back, Zeref really was the character given more depth than any others; he was an anti-villian at it’s finest, who looked to seek justice for the tragic tale he lived. However, it only takes one hit from Natsu to allegedly ‘set his soul on fire’. That, and a speech Natsu has to give about his friends before socking Zeref in the face. Thus, the flame of ’emotions’ renders Zeref injured and immobilised on the guild floor. What exactly am I reading, friendship is magic? What should’ve been an epic battle turned into a one shot kill, and one of the most hyped characters in Fairy Tail met his demise with a fatal combination; a punch and a kiss.

Don’t get me wrong. As a romantic, Mavis and Zeref’s relationship was one I had rooted for during the entirety of Fairy Tail Zero – but not throughout Fairy Tail’s actual story. Though my heart did swell with emotion as both Mavis and Zeref disappeared, having finally found a chance to be together in the afterlife, the link between said ‘brothers’ Natsu and Zeref was almost instantly cut off. Zeref was reduced to dust fairly quickly, and the next threat arose; Acnologia. I don’t even want to go into detail regarding how Fairy Tail defeated him, as it was truly underwhelming and I’d just be repeating myself. However as the final arc reached it’s end, it was hard to feel anything but dissatisfied with what had transpired. The story felt rushed, and the years of anticipation dissolved within a few weeks of manga updates. For what was once an overwhelming series, Fairy Tail met a bitter end.

The final chapter, ‘Irreplaceable Friends’ has a fitting name that ultimately wraps up what Fairy Tail revolved around – friendships, rather than battles like many other shounens. This chapter starts a year after the final fight against Acnologia and Zeref, and is written from Lucy’s perspective – mirroring some of the very first chapters of this manga. It essentially recaps where the Fairy Tail guild members are currently at and how they’ve moved on from the final fight. While this can be seen as a concise ending, it also smothers any underlying hope that the last arc’s finish was a joke and there was a much more satisfying end in works.

We see that Lucy has published her book, and the entirety of Fairy Tail is here to celebrate. Essentially, nothing’s really changed. Other than that, there are notable moments between the hinted couples in this series, such as Gajeel and Levy’s relationship having a family in the works! Gray and Juvia’s feelings for one another are made fairly apparent too, and if there’s one thing Mashima can do at this point I guess it’s satisfy the shippers. All of the other guilds such as Sabertooth and Mermaid Heel are fairing well also. The play around Laxus’ unnamed lover remains a mystery to the end, but what really shocked me was the fact that Natsu and Lucy had no definitive answer to give regarding their relationship also. It was almost as if the story of Fairy Tail hadn’t come to an end after eleven years of rooting for the main couple to end up together, only for Lucy to confess and get completely blindsided. 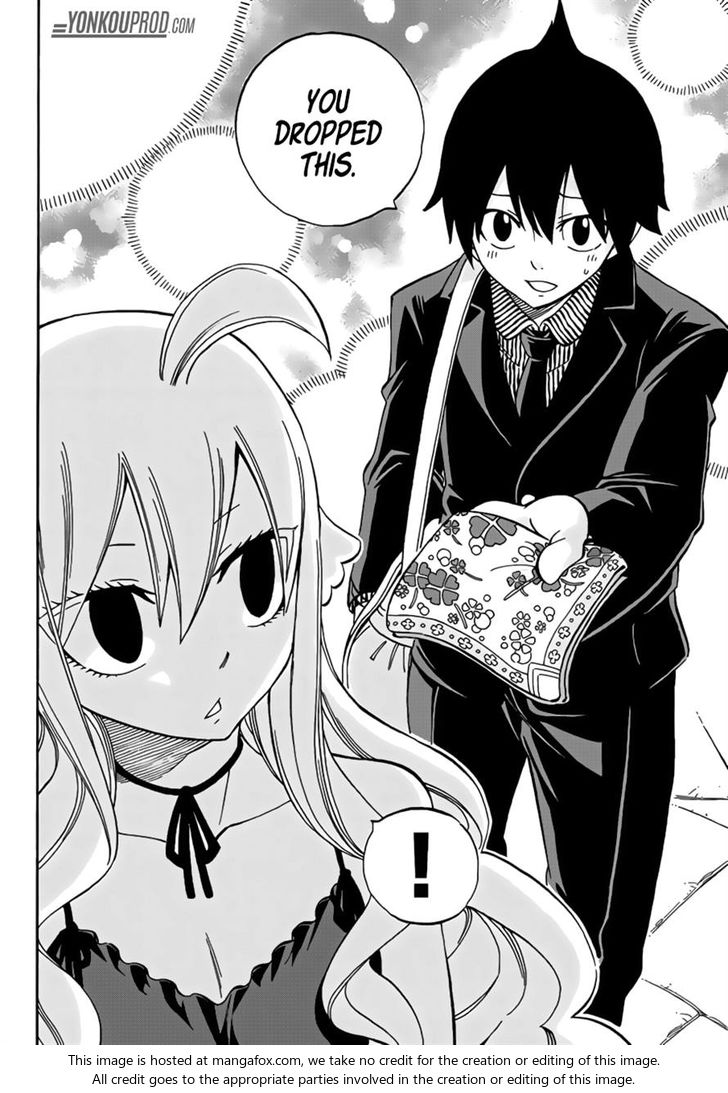 One seemingly impossible phenomenon that occurs within this chapter is the reuniting of Zeref and Mavis in their next life. It was absolutely adorable to witness, but made no coherent sense. Then again, were we really expecting Fairy Tail to have overseen plot holes? Regardless, it was heartwarming how they’d met in August, once again. In fact, this chapter as a whole ends Fairy Tail entirely on an uplifting note. In my opinion, it was too uplifting; I felt that there was nothing I had learnt from this tale. Though I had enjoyed the journey to our inevitable destination, I still felt disappointed with how unrealistic the ending to this manga was.

It was as if the Fairy Tail members had gotten off too easily; no significant characters had passed away, and Natsu seemed unbothered by the final fight with his brother and Acnologia. Even at the end of the chapter, he states he ‘doesn’t care about all of that stuff’ and falls back into how his character was derived in the very beginning of Fairy Tail once again. This creates comedic affect, but just highlights how little character development Natsu has had during this manga that has actually stuck with him. By the end of the chapter, it honestly doesn’t feel like Fairy Tail’s finished; which I guess can be seen as a positive, as I believe Mashima was alluding to Fairy Tail being a never ending story. He even mentions the hundred year quest our favourite characters will be voyaging on, highlighting that the adventure is far from over. However, this also makes the impact of Fairy Tail’s manga far from great. It’s as if the last two arcs never occurred, and Fairy Tail’s guild is exactly the same as how it was depicted in the beginning, only heightening the disappointment coursing through me at this rushed finish. Overall, that’s what Fairy Tail concluded as; a rushed, rough around the edges, generic manga. Nonetheless, it’s characters are diamonds in the rough that I grew up adoring – though they didn’t get the development they deserved, many still saved this series and made it all the more enjoyable to read.