Sora's angry crying in the featured image is my mood after sitting through the clusterfuck that was Kingdom Hearts 3's endgame. Expect me to discuss the bad and the ugly.

Disclaimer: This article will discuss content from Kingdom Hearts 3. Reading it is not advised unless you’ve beaten the game.

If someone had told me that I would walk away from Kingdom Hearts 3 feeling utterly disrespected by its conclusion, I wouldn’t have believed them. The thing is, when we were caught up in the hype and everything shown in trailers looked exciting – of course it was hard to imagine that Kingdom Hearts 3 would betray all expectations and crash and burn in a horrible manner.

I’ll be honest, I did expect to be mildly disappointed by the game. The Final Battle trailer hinted at the fact that Sora would be the one to ultimately beat Master Xehanort without anybody else’s help. Still, the Opening Movie trailer was enough to mildly ease my nervousness. The Opening clearly demonstrated Nomura was aware of each trio being wronged by a specific version of Xehanort. This led me to believe that he acknowledged the need for closure that each group of main characters had with the Xehanort who wronged them. Since you, the reader, have presumably played Kingdom Hearts 3, you must know that I was wrong.

The way this plot point was handled is only the first of many questionable narrative choices. The Destiny Trio was wronged by Ansem, Seeker of Darkness. The Sea Salt Trio was wronged by Xemnas, Xehanort’s Nobody. Finally, the Wayfinder Trio was torn apart by Master Xehanort. Yet, who was the one who took care of all of these antagonists? Sora. 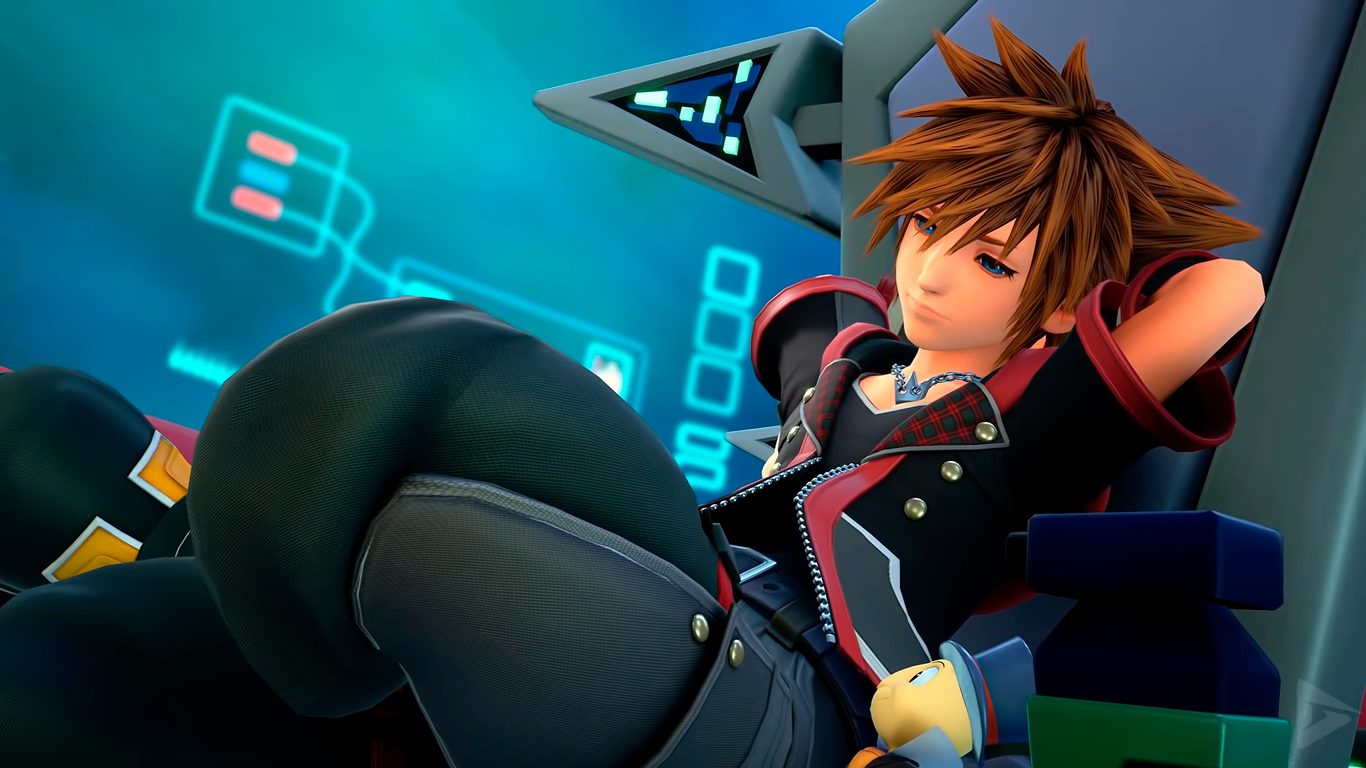 Sora’s status as the perpetual protagonist of Kingdom Hearts 3 was the root of many of the glaring narrative issues. Kingdom Hearts as a series clearly knows how to handle having multiple main characters – Birth by Sleep, Dream Drop Distance, and even Kingdom Hearts 2. Although we were given the chance to play three battles from someone else’s viewpoint (Riku and Aqua), these opportunities were incredibly short and anti-climactic. Actually, if you were to sit back and think about it – the first battle as Riku served as more of a tutorial. The second battle as Riku, he lost and Sora ended up swooping in and taking over for the rest of the battle. Then, in the third battle, Aqua lost and was saved by Ventus. What did we learn today? Kingdom Hearts 3 loved portraying any character who is not named Sora as helpless!

Obviously, I did get sidetracked from my main point here. As we know, most of the actual Kingdom Hearts story was shoehorned in at the very end. The pacing was shit, but I’ll elaborate on that later.

For the most part, the narrative was delivered in the form of a long final battle against Master Xehanort and his underlings. But here’s the thing – Sora was the one who truly defeated all of these antagonists. The story was told in a way that showed the other main characters not making any substantial progress in their battles against Xehanort’s 13 Seekers of Darkness. It was only when Sora swooped in to save them that they actually got anything done. While this was ridiculous by itself, it became even more unnerving because of the plot threads that were taking place on the side. Plot threads that Sora should not have been a part of. You can probably tell where I’m going with this: why the actual fuck did Sora need to be in each of the trio’s fights and subsequent reunion?

Sora did not need to be in them, and even in the Sea Salt Trio’s case – he could have just left after Roxas was brought back, instead of having Xion tell Axel that he should rest rather than fight. These battles would have been much smoother if only Nomura had let us play as Roxas and Aqua instead of having Sora hard carry everything. They had already programmed Aqua as a playable character in the game, and they had a guide on how to animate and program Roxas with Kingdom Hearts 2. Honestly, just having Sora intrude in on these moments was so odd? Especially in the Wayfinder Trio’s reunion, to be honest. 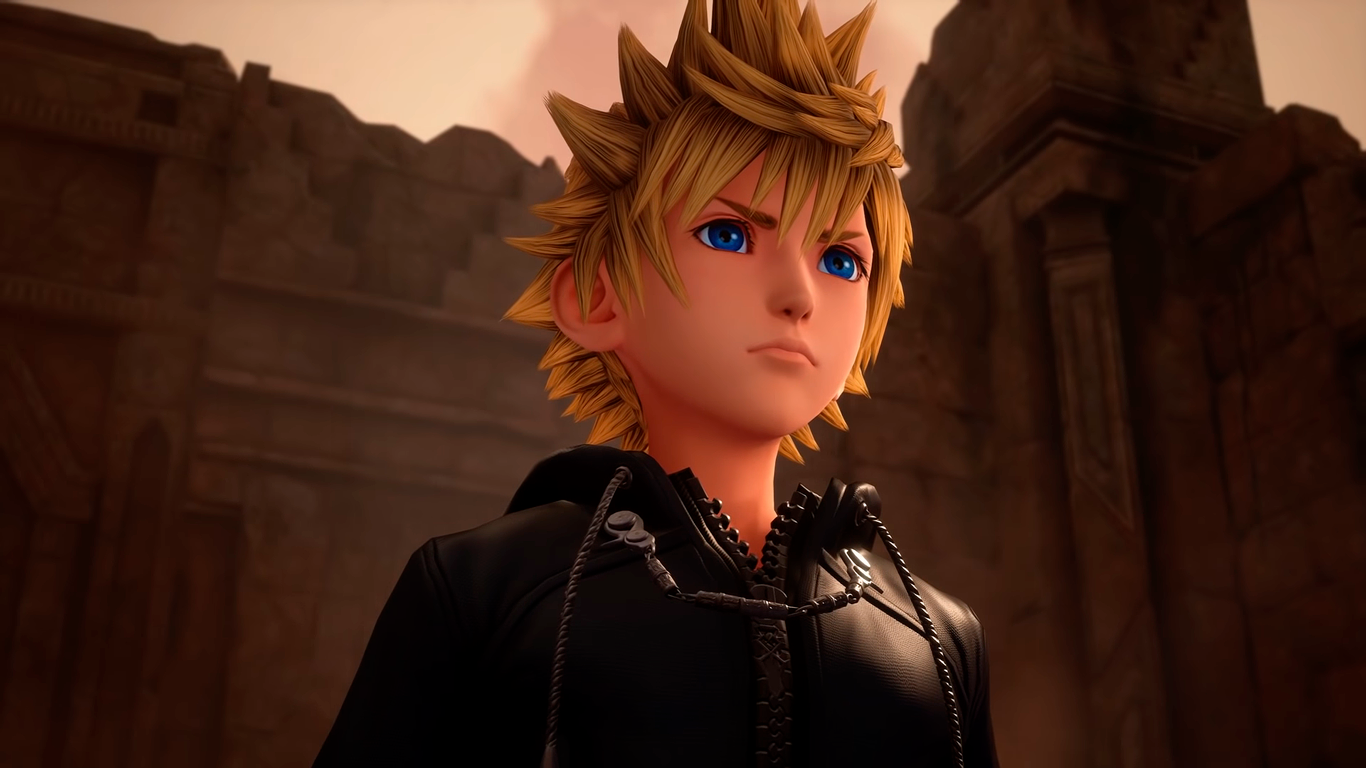 Speaking of these reunions: they were utter garbage. These damn scenes were supposed to be the conclusion millions of fans had been anticipating for years. In the end, they were rushed just like everything else in the story. Axel’s whole goal in every game he’d been in was to save Roxas? Guess what, he doesn’t! Roxas and Xion just show up out of nowhere! Hell, Nomura didn’t even let Axel help to collect Roxas’ data or some bullshit like that. He literally contributed nothing. Boohoo.

Next character, Terra! He was manipulated by Master Xehanort and his body and free will were taken from him for over 10 years. Surely he’ll get some closure, right? No! Somehow, Master Eraqus’ ghost manifested through Terra – and by that, I don’t mean he possessed Terra, he literally walked out of Terra’s fucking body – and he just gave Master Xehanort, the man who murdered him, a pep talk to give up on his evil ways! While Terra just chilled in the background! Oh, and by the way, Aqua? The incredibly strong character who became a Keyblade Master and saved both of her friends in Birth by Sleep? She lost every single battle she’s in! Love, Nomura!

Dear god, what was this game.

Moving on because my will to live is being tested by the memories this rant brings, Kingdom Hearts 3’s pacing. Yeah, that was a flaming piece of garbage too. In fact, it was probably 90% of the reason they couldn’t fit in proper closures for the damn characters. For about 24 hours, give or take, you explored Disney worlds with a ton of movie content and… not much Kingdom Hearts plot.

It was a slow burn, alright. But then, suddenly, the pacing went from 1x speed to 4x in a matter of minutes. The player was thrown one revelation after another with no actual time to process them and no proper delivery. Seriously, this catastrophe felt like Nomura re-watched the cutscenes of his previous games, wrote down a checklist of the plot threads he had to close, and then proceeded to shoehorn in everything in the list in the most rushed way possible.

I simply cannot wrap my head around the fact that the big Kingdom Hearts 3 actually ended up with worse writing than the spin-offs. Weren’t the numbered titles supposed to be the ones with the most effort put into them? Did all of the budget go into the character models for the Disney movies? How come Nomura wrote lovable characters in his spin-offs and then decided to throw them into a burning pit in this game? 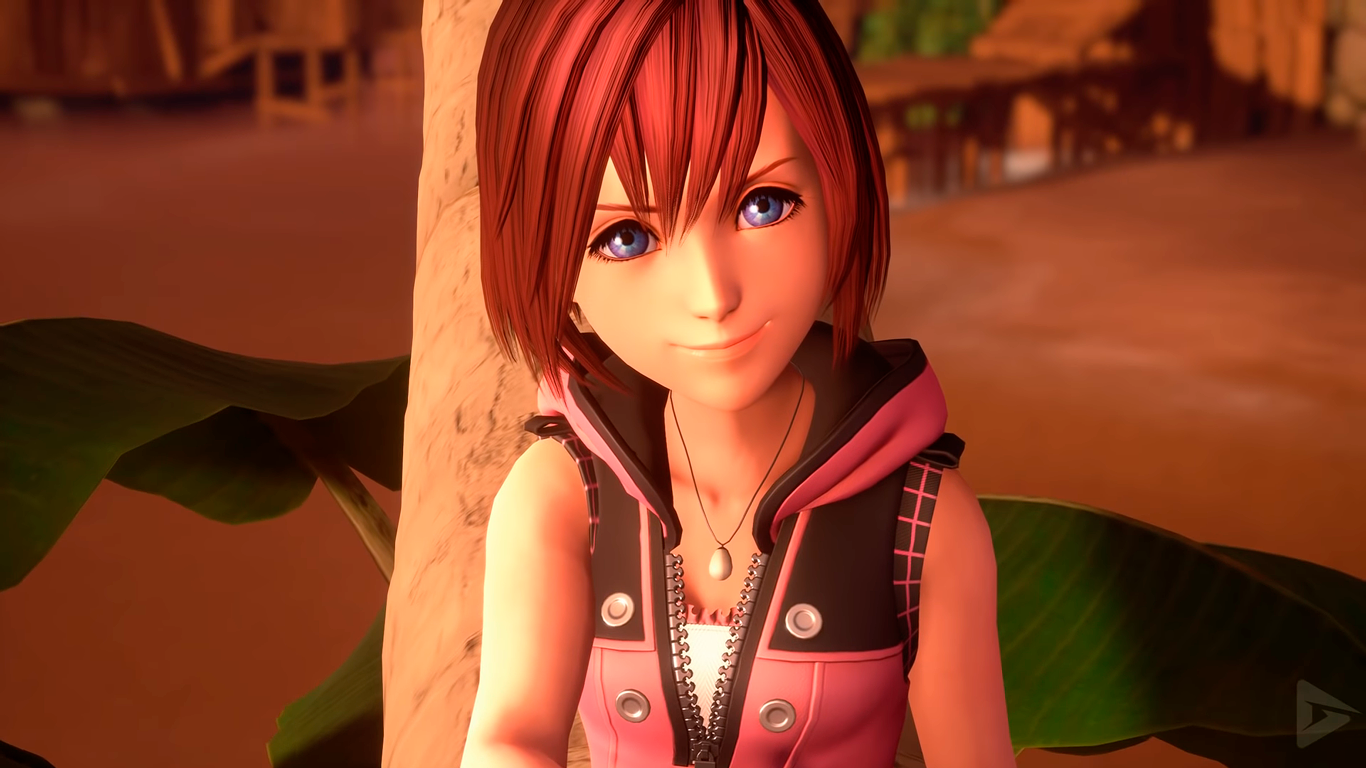 If you’ve read the common complaints about Kingdom Hearts 3, you’ll probably notice I haven’t even acknowledged most people’s problem yet. Kairi. Yeah, well… I won’t even go in-depth on this point. Criticism about Kairi is everywhere, and I’m sorry, but I’m not one of the players who want her to be playable later on to redeem herself or some nonsense. At this point, she’s so far from redemption that the best she can do for me is to stay the fuck out of the story.

Kairi spent all of Kingdom Hearts 3 preaching how she was tired of being a damsel in distress and was ready to kick some ass for Sora. The promotions for the game prior to its release also hinted at Kairi becoming a capable fighter. Instead, we got a useless, annoying, bland character who got kidnapped for the umpteenth time. It appears that Kairi getting kidnapped is a tradition for every numbered Kingdom Hearts title. How thrilling.

I could go on a detailed rant on how Kingdom Hearts 3 placed the final nail in the Destiny Trio’s coffin. However, it’s glaringly obvious. Kairi and Riku simply never interacted, and whenever Kairi was in the picture, Riku was taken out of it. It’s as simple as that.

For example, the other two trios always had some sort of symbol to solidify their union. The Sea Salt Trio shared sea salt ice cream. The Wayfinder Trio had custom-made Wayfinder charms to find their way back to each other. In Kingdom Hearts 1, Kairi gave Sora a Wayfinder charm, but the symbolism tied to the Destiny Trio had always been hinted to be the Paopu fruit – a star-shaped fruit that was supposed to intertwine your destiny with whoever you shared it with. Kingdom Hearts 3 finally used that symbolism… with Sora and Kairi. While Riku conveniently sat meters away from them, staring at the sunset by himself. Romance in Kingdom Hearts is unnecessary and ruins the deep friendships the series tries to portray, period!

The last thing I’d like to bring up is how the trailers blatantly catfished us. When you watch a trailer, you usually expect to see more in the final product, right? Trailers are only meant to give watchers a glimpse of what to expect, with the purpose of promoting the final product.

Kingdom Hearts 3 fucking spoiled everything it had to offer.

I refuse to even try to understand what Nomura was thinking. Who the fuck does that? 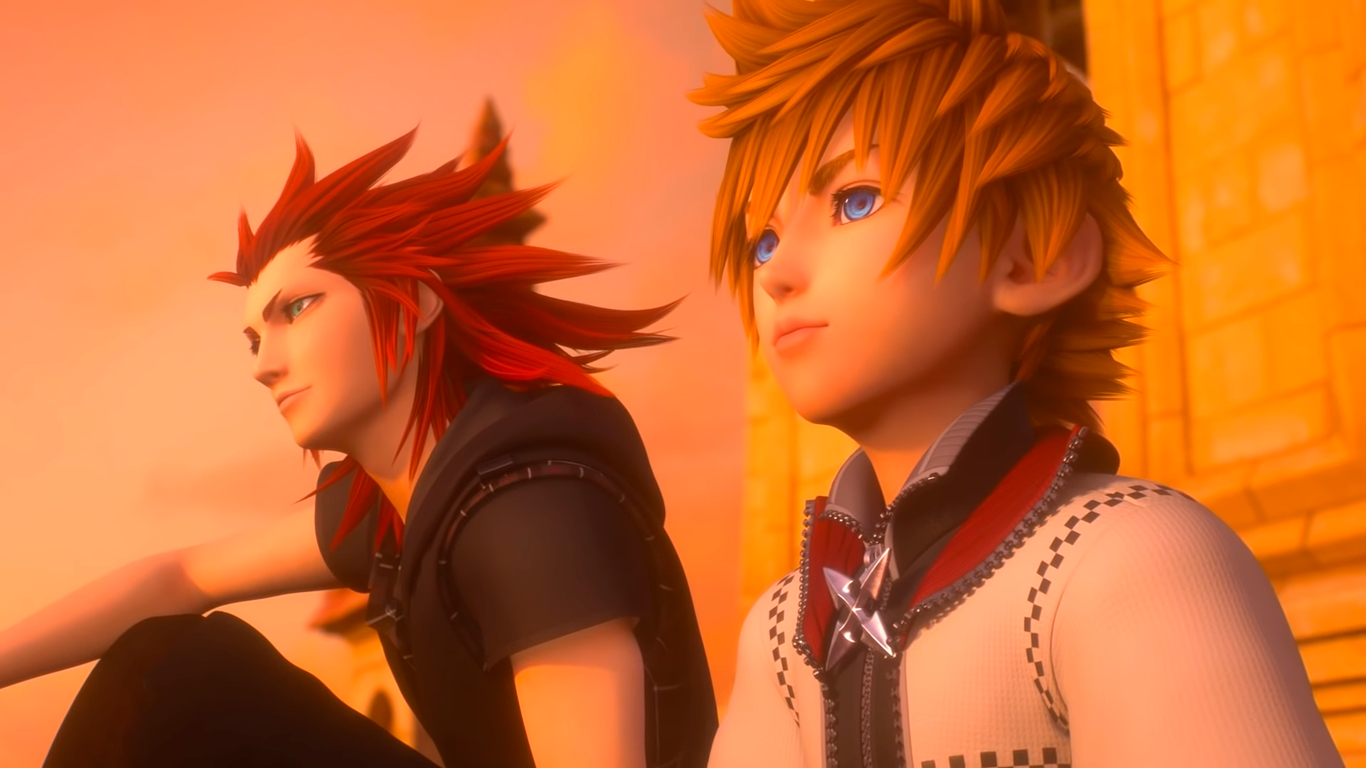 The reason I can come up with all of this criticism for the game is that I’m deeply invested in Kingdom Hearts as a whole and have been for years now. While waiting for Kingdom Hearts 3 to come out, I made a gag out of linking the Kingdom Hearts D23 2017 trailer on the group chat with my friends every single day. I even tried to play the clusterfuck of a cash grab that is the KHUX mobile game before I eventually gave up and just stayed up to date with the latest cutscenes through YouTube. If that’s not true love, I don’t know what is.

I adore this series and fell in love with these characters – I couldn’t wait to see each of the trios reunite! To see these groups of friends finally be happy together again! I waited for so long, and I got a conclusion that was a disservice to most, if not all, of its characters.

I thought I would get around to writing a review of Kingdom Hearts 3 once it came out, but it’s now that I realize that it would come down to me praising the gameplay, graphics, and the Disney worlds, and subsequently elaborating on why the narrative was dog shit.