espressOH! – An ode to Jellyfish Entertainment: Gugudan is more than Sejeong and her backup dancers!

by SLY
in espressOH!, Korean Entertainment
5

First of all, I would like to defend myself early. I am a really hardcore Danjjack and have been following the group even before debut. If you are a member of the OneHallyu Forums, you would have seen my threads during Produce 101. I created Sejeong and Jellyfish Girls threads on a daily basis because I really adored the three representatives both visually and talent-wise. Especially Sejeong, who was my most favorite member at that time, who will also be one of the main points in today’s espressOH!. I would like to apologize to Sejeong’s fans in advance just in case, because some of you might misunderstand me and get offended.

I don’t want to be that person, but I think I would not be able to sleep at night without expressing my thoughts about this issue concerning Gugudan as a group. An issue which deserves attention from Gugudan’s agency, Jellyfish Entertainment, for certain reasons.

Watching the music video, one can’t not praise it for its beautiful production. The song is really good; it’s actually one of their superior tracks (but inferior to A Girl Like Me). The music video was really well made, especially with the girls’ amazing visuals that graced the almost four minute footage all throughout. If you would ask me, the MV of “The Boots” is their best thus far.

However, while it’s their best, it’s also their most disappointing.

Saying that I’m disappointed is an understatement. Frankly speaking, we do not want a Sejeong ft. Mina and the other girls MV but a Gugudan with 9 members MV. Yes, the music video is really beautiful, but that doesn’t compensate for the awfully unequal screentime for each member. Sejeong had a vast number of solo cuts, while some members were barely seen individually. Take Haebin & Soyee for an example. If you add the both members’ screentime, they probably won’t even amount to half of Sejeong’s. And of course that will bring disappointment to fans.

But the disappointment doesn’t end with the music video. What’s more awful than the MV was the line distribution. In this video, ultimatekpop recorded the singing time of each member in the song.

I watched the video with already low expectations but I did not foresee it to be worse than what I expected. As a matter of fact, this is actually the worst line distribution I have ever seen, considering the fact that every Gugudan member (sans the rappers, Mina and Sally) are amazing vocalists. It’s really sad to see that while Sejeong is present in all the verses, choruses, and evenconds max screentime in the MV). It’s really absurd, especially since Soyee is a main vocalist, just like Sejeong. And while we’re at the main vocalist talks, another one is Haebin. Who only got a single verse and random “oh baby” lines. It’s not an exaggeration to say that Sejeong got more lines than the rest of the vocal line combined. 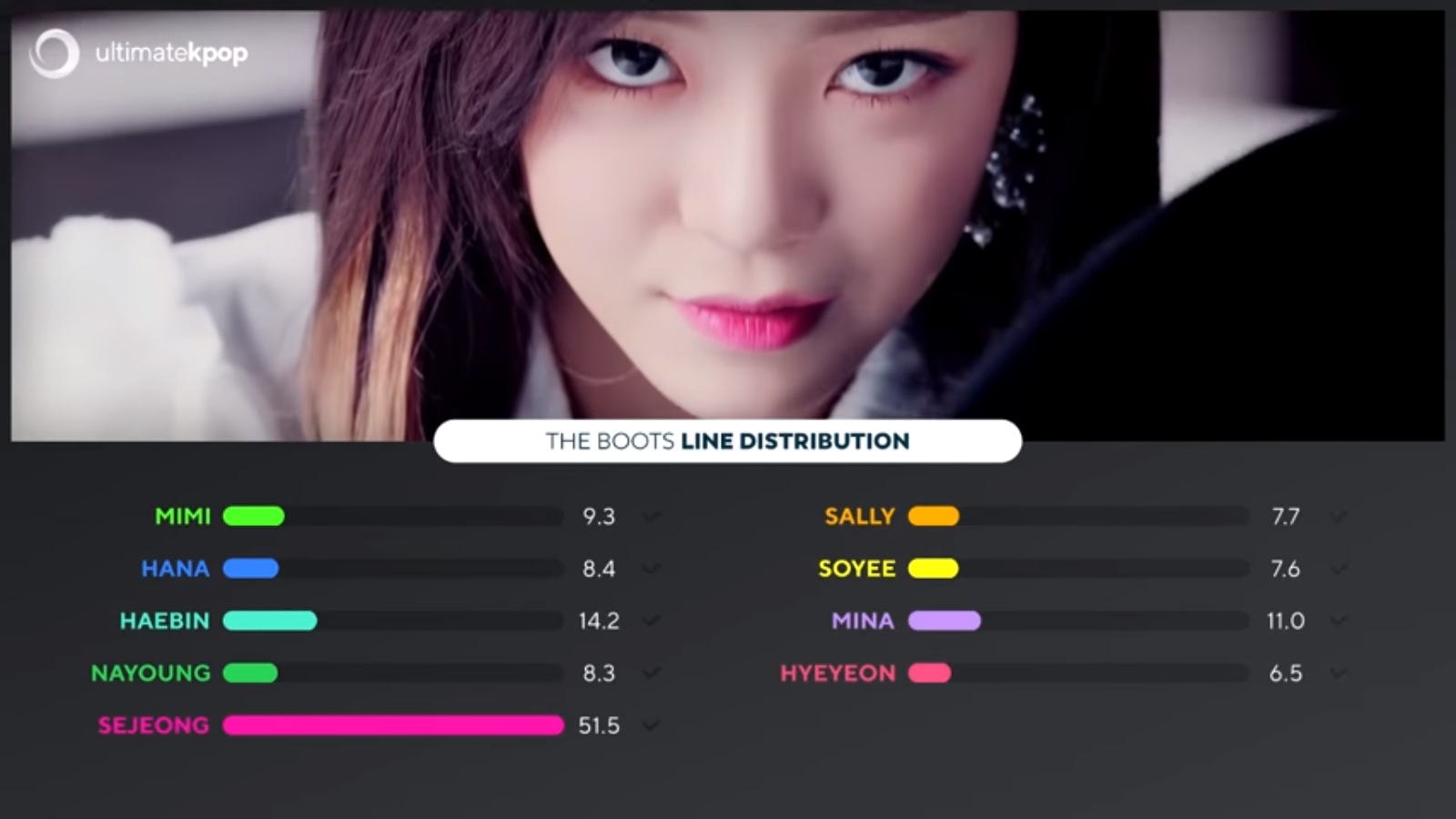 I love Gugudan including Sejeong so much, which makes it more disappointing and heartbreaking to see the direction Jellyfish Entertainment is taking with them. I know the case of SeeYa, and I wouldn’t want Gugudan to become one. SeeYa was basically Nam Gyuri and the other girls, but the main difference is that it worked for them. It doesn’t work for Gugudan. “The Boots” actually dropped out of melOn’s top 100 already. Kudos, Jellyfish Entertainment!

I hope this will be a wake up call for their company. Treating the girls with absolute inequality won’t bring them any good. The Boots is not doing well, proving that singling out a member won’t do it for Gugudan. What they need is promotion, proper management, and perfect timing.

We, OT9 stans, already know and won’t take against anyone how Sejeong (and sometimes Mina) always get the individual schedules, because everyone is aware of how popular they are. However, if it is always Sejeong, then it would bring little to no benefit to Gugudan no matter how Sejeong introduces herself with the cute smile of hers as “Hello, I’m Gugudan’s Sejeong!”. Because not everyone will take interest in the group if they only see the same member from time to time. I diligently watch Sejeong’s shows like Running Man and Happy Together. I admire how she really works hard promoting her group but I feel remorseful because her hard work is going almost nowhere. If it was Sejeong getting schedules, while the other girls are promoting Gugudan individually as well, then it would be beneficial for the whole group. Hana and Mimi are previously actress trainees; they could definitely play a role in some dramas, especially with their actress visuals. Haebin and Soyee are vocal powerhouses; they can have more OSTs, collaborations, and musicals too. Nayoung is a bomb model with her long legs and perfect proportions; she could do better than hosting a show that almost no one watches. Sally can join shows like KBS’ Black Swan, and Mina can continue acting and guesting on other shows. See, Gugudan is a bunch of ultimately talented girls. Is it really that hard for Jellyfish Entertainment to treat every single one of them right? Let alone give everyone their deserved spotlight in Gugudan songs?

This issue, I think, is severe. It will just create a rift between fans inside the Danjjack fandom. I know of some cases where the company treated the group members unequally which lead to the demise of the other members and the rise of only one. Is this really the same Jellyfish who promotes VIXX members equally? I think not. We demand them to treat Gugudan objectively and equally. We love Gugudan as Hana, Soyee, Sejeong, Nayoung, Haebin, Mimi, Sally, and Mina, not as Sejeong and her backup dancers.