I’m sure quite a number of you have seen the negative reaction to Never Gone across most sites. Gifs cut from the film have been spread from Chinese sites such as Weibo to international audiences like wildfire. The question is: does any of it hold any truth at all?

At the heart of it, Never Gone is essentially a tragic romance that centers around two star-crossed lovers. Director Zhuo Tuo Ruo takes the helm, while Kris Wu and Liu Yifei play its lead roles: Cheng Zheng (Kris Wu) is a rich, overconfident brat who tutors and charms his way into the Su Yun Jin’s (Liu Yifei) heart, while the latter is a poor, introverted girl, whose major life decisions appear to revolve solely around him.

So far, Never Gone has earned approximately 300 million yuan since its release. This is certainly a feat, considering its lead actor’s newness to the Chinese film industry, as well as relentless bad press that Kris Wu has received as of late due to his sex scandal. But that’s another matter altogether. The film itself sounds like harmless, mindless entertainment, driven by visual appeal. As is the case with most mainstream romances. But is it? 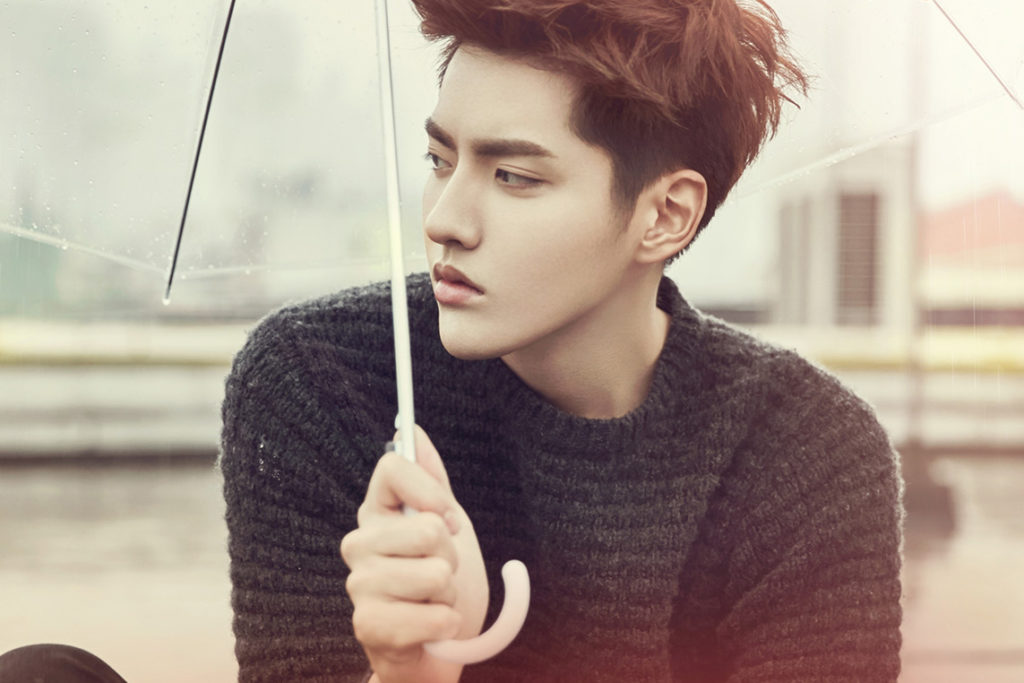 The first part of the film is a sweet and a fairly decent portrayal of young love. One might even get the impression that this is a lighthearted romance with a tinge of comedy from its colourful introduction.

But Never Gone takes a darker turn from the moment Su Yun Jin disappears from school for personal reasons, and later decides to part ways with Cheng Zheng by the time they graduate high school.

It then quickly downward spirals halfway through when Cheng Zheng grabs Su Yun Jin and forces a kiss on her. This is the one scene that many of his critics have taken out of context. Kris does not typically have much issue with kissing scenes in general. In every other scene where consent is much clearer between them, the kisses are far more palatable. The main point of the kiss is to portray Cheng Zheng as an intensely flawed character, and establish the story as an unhappy antithesis of sorts to the romance genre. The clear shift in body language from the first kiss in the film to this one seems to demonstrate this.

But the lilting, soft background music seems to suggest otherwise, romanticising the way he takes the kiss by force. If Zhuo Tuo Ruo wanted to introduce a certain dark complexity to Never Gone, it was poorly executed.

From then on, the story begins to lose focus. Its progression becomes a bit of a blur as it attempts to portray the lead relationship’s unsure, unhealthy build-up before its eventual crumble. This is made worse by the film’s forgettable subplot involving its supporting characters.

It’s almost a bit of a relief by the time the credits roll in. 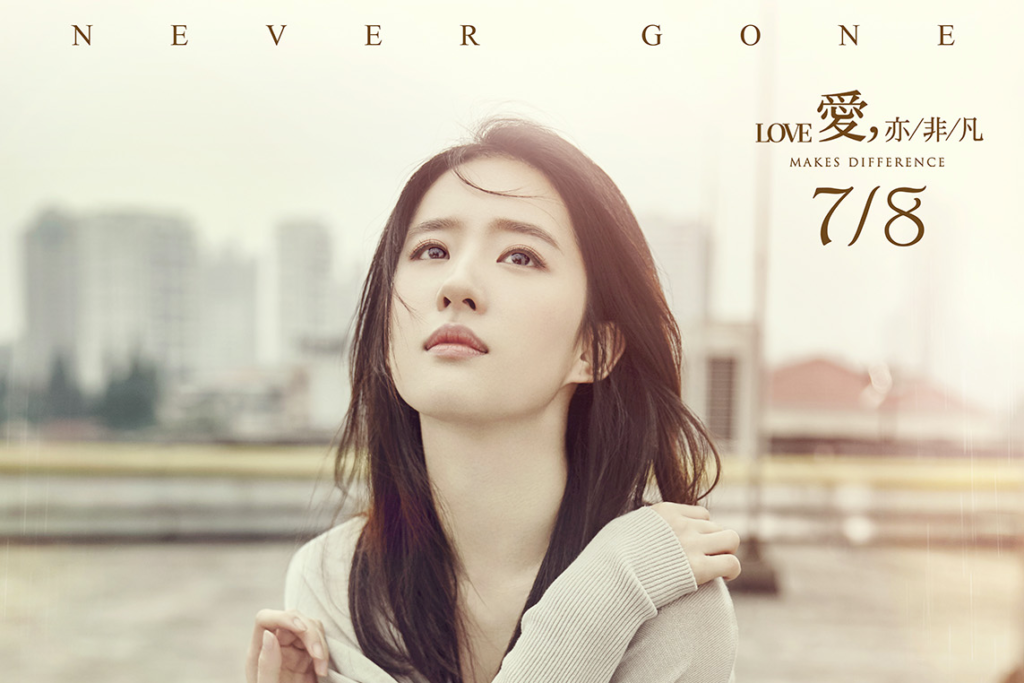 Liu Yifei isn’t exactly the perfect actress. But between her and Kris, she was the slightly better half. She shows some vulnerability that somewhat suited her character, even though she was underwhelming and monotonous.

The latter had Cheng Zheng’s mischievous nature and cool, rich boy persona more or less down pat. He actually made the first part of the film quite delightful. However, when it comes to passion, Kris was stiff and his emotional delivery lacked nuance. This is partly the reason why the infamous kissing gif looks hilarious out of context. Kris also tends to overact, particularly during the scene where Cheng Zheng is heavily inebriated after confronting a rival.

Their onscreen chemistry isn’t an earth-shattering one, but they do have their moments.

As previously mentioned, Director Zhou Tuo Ru is by no means a seasoned filmmaker. Never Gone is his directorial debut, and unfortunately, it shows.

The camerawork is generally decent, but sloppy cut scenes, and clear continuity errors cut away at any attempt at suspension of disbelief. For instance, in the final breakup scene, Kris’ face is agonised while he begins to move his hands. But all of a sudden, the camera cuts to another angle, and the expression completely changes while the position of his hand abruptly shifts. It’s distracting and takes away the effectiveness of its climax.

Overall, the film is a daring, but incompetently assembled work, saved by its leads’ respective visual appeal. 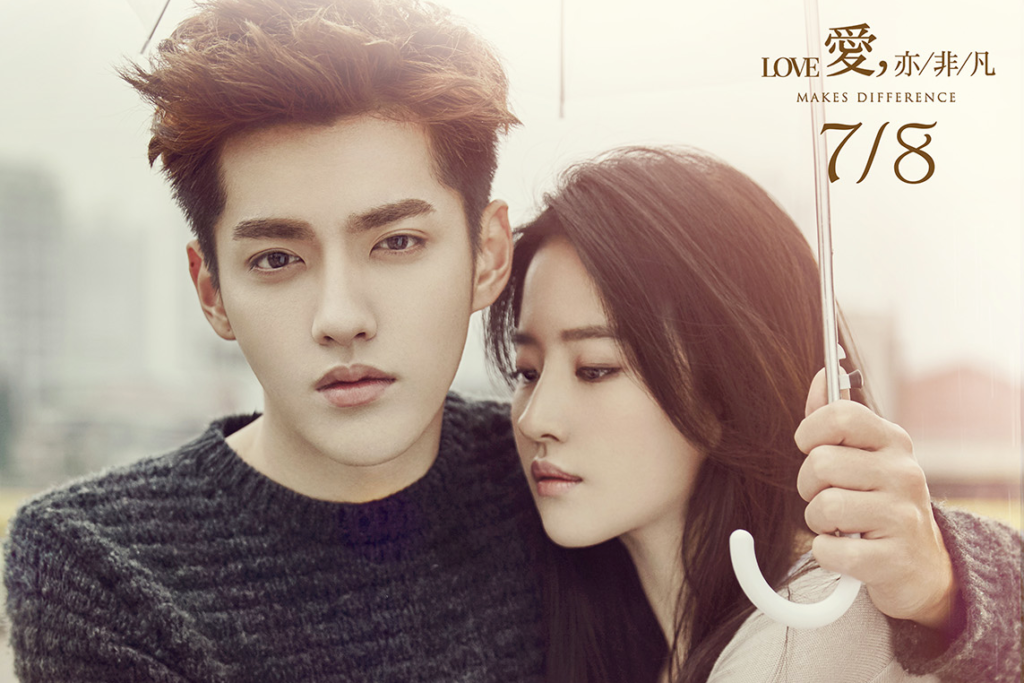 As someone who follows his career, I wasn’t initially sure why Kris accepted the role since I found the film ghastly. I thought it was beyond a terrible idea, especially after he’d impressed with Mr. Six. But a few possibilities came to mind:

The thing with mainstream film, especially the romance genre, is that the layman doesn’t always buy a ticket to see a meticulously crafted, cinematic masterpiece with flawless acting. Screen presence, charm and widespread appeal are all it really takes for it to rake in moviegoers, and Kris Wu and Liu Yifei have all of those traits. The fact that Never Gone is this much of a contender in the Chinese box office is enough evidence.

Still, Never Gone is not something I would watch again willingly, nor would I personally recommend it to non-fans.