by briantrnn
in Chinese Entertainment
1

By being the first live action to follow the Hana Yori Dango manga storyline, the original Meteor Garden had its heyday with hot boys to woo over and an interesting storyline to follow along. Seventeen years later, producer Angie (who also produced the original) released a Weibo post with the hashtag #FindingF4 and announced a reboot. With anticipation, viewers excitedly waited only for most to be disappointed. Chinese netizens have downright tried to boycott the show stating their discontent with the updated storyline.

Amidst the bad reviews, is Netflix’s and Hunan TV’s latest offering really horrid? And if not, would the show really live up to its predecessor?

Episodes 1 and 2 aired in China to the masses on July 9th. Streaming options were then available locally for both episodes on July 10th. On July 13th, Netflix announced an international distribution deal and proceeded to sequentially release episodes from July 14th onwards.

Meteor Garden opens with the introduction of the main character Dong Shancai (Shen Yue), her family and best friend Jiang Xiaoyou (Li Jiaqi). Shancai reveals that both she and her high school friend Chen Qinghe (Liu Yinhao) manage to successfully enter the prestigious university of Mingde. The two characters babble about how they’re excited to enter the university before they bump into Li Zhen (Dong Xin). Li Zhen is seen as an introvert from the same high school with high marks.

While Li Zhen does not seem approachable, both Qinghe and Shancai make efforts to try to befriend her and welcome her into their friendship group.

Shancai’s day moves on smoothly in what seems like a normal college day, with going to classes and lectures. However, her day quickly takes a turn when Shancai, whilst talking to her friends, carelessly bumps into a hoard of people who are obsessed with F4. With the bump, her phone falls to the floor.

As the phone falls, one F4 member steps on it causing the screen to crack. This enrages Shancai and she goes down to try to talk to F4. Shancai’s confrontation, however, fails as she is tackled by a security guard before even having the chance to speak out her discontent.

Moving on from the incident, the freshmen regroup and meet Guo Caijie, a junior journalist major, who is walking by. Guo notices Shancai asking who F4 is and tells the group about F4’s feats. Guo Caijie then proceeds to state how popular F4 is and their challenge when someone receives a joker card. 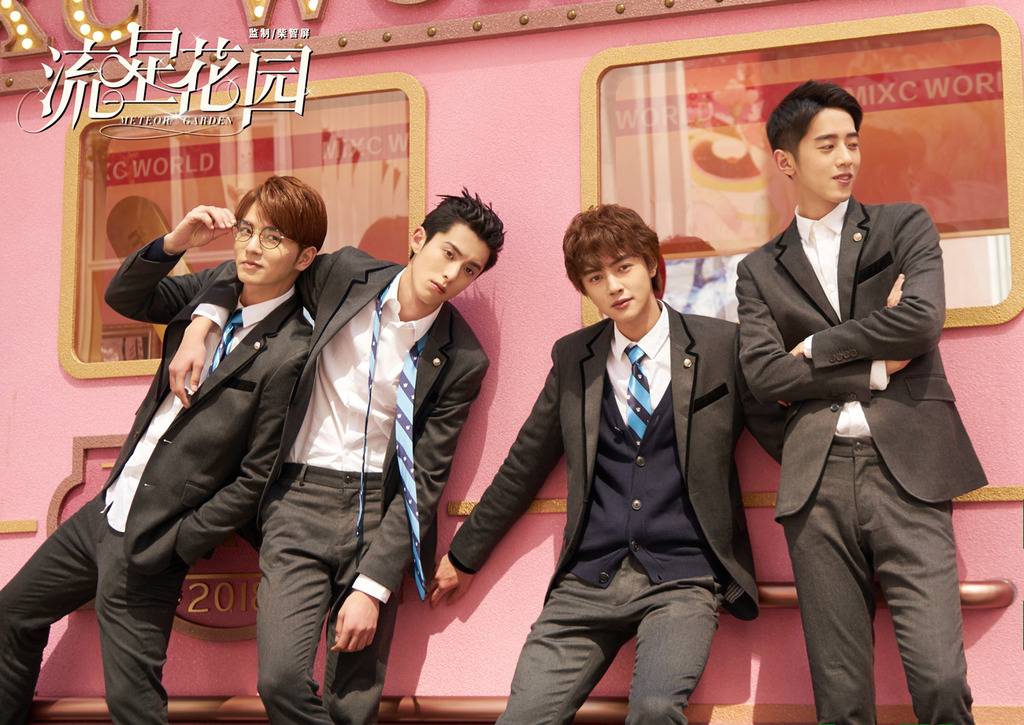 One slight issue is that the challenge is the popular card game “Bridge”, which all four members are professional players in. The consequences of losing could be dire to the student that had challenged the F4 group. Consequences include eating 100 dumplings in a span of one hour and eating a whole slipper.

As Caijie finishes introducing the group and proceeds to leave, coincidentally the F4 group walks past. Now, Shancai has the opportunity to confront Daoming Si and she asks him what her phone looks like. Dao Mingsi states “a cracked phone” but disregards the incident and walks off with his group.

The storyline develops with Daoming Si behaving childishly and being an ass to Shancai before the climax hits. Si proceeds to order 20 take away boxes of her mum’s food, then insults the food inside. Shancai, clearly hurt by the insults, proceeds to lash out at Si. Si enraged throws the food at Shancai which prompts her to leave quickly.

As soon as Shancai is outside, she tries to wash up the food on the clothes at a public water tap. Two men then pop out of nowhere and try to assault her. As they try to grope Shancai and take her somewhere else, Huaze Lei (Kuan Hong) appears and defends Shancai.

After the incident, Shancai goes home and tries to sleep, only to wake up to nightmares of F4 saying “Eat the slipper.” As Shancai eats breakfast, she thinks of fighting back. The scene then cuts to Shancai moving angrily past Chen Qinghe before high kicking Daoming Si in the face.

The episode ends with Si falling unconscious on the floor.

Comparisons between the original and reboot.

Due to the hype that lead up to the reboot, it felt like many people were left disappointed by the end of the duo-episode. Everyone expected the storyline to be the same as the original, but instead the show’s dynamic changed to a more modern and believable plot.

In the reboot, every incident is more toned down and lowkey which is perfect in 2018. With bullying prevention elements now in place, having bullying incidents in the show would’ve been cringeworthy to watch. I highly give props to the director Lin Helong who actually adapted the show to the current age.

Elements of the show

The drama casting was impeccable, especially between the main characters. I feIt the chemistry between both actors; they fit together like two peas in a pod. From the seemingly angsty interactions between Mingsi and Shancai, to then having a romantic spark between Mingsi, Shancai and Lei. It just intrigues me how perfect Angie casted everybody’s role.

The camerawork was very out of the usual for a Chinese drama. From the slow 360 degrees shots to the aesthetic and clean colouring, even in the dim and dark warehouse. I want to thank the team that shot the show and it truly goes along with Angie’s statement of “making a flashier adaptation” of the show.

The only thing that irked me about the drama was the product placements. From the start, it’s obvious how the camera shot the smartphone falling unrealistically for the viewer to see the brand “Vivo” as plain as day. Then, we see it again in the middle of the show where messages and posts came from the “QQ” app. From a viewer’s perspective, these segments looked jarred and it honestly felt like a turn-off. Hopefully these won’t continue but given the amount of sponsorship money the show would get, I highly doubt even complaints would stop the show’s blatant product placements.

Meteor Garden might not be your cup of tea if you were too invested in the original or hate the “damsel-in-distress” narrative. I, for one, enjoyed the first two episodes. If the all of the show’s plot goes according to plan, Meteor Garden will be a hit. The show has already hit 2 billion streams on Mango TV and has 10% ratings on Hunan.

Even with the abysmal ratings that the spiteful Chinese netizens have given to the show, what goes down must come up, right? Here’s to hoping that the show doesn’t take a woeful route in the plot.