by ladyandsansa
in Editorials, Japanese Entertainment
9

Anime has been a hot market for several years now, expanding from Japan to other Asian countries and even spewing over to the west. Culturally, it has spawned a great following with various countries streaming entire series and many stores worldwide selling anime-related merchandise. It will not be too hard to find someone on the streets who at least knows what a Pokemon is, no matter their age.

I have never really understood the hype and even when I decided to join the Kpop and later Kdrama community, I abstained from watching any Japanese entertainment. Although I cannot put my finger to it, it was always hard to cross over to this worldwide phenomenon. It was not until recently that I decided to finally give anime a go and I must say, I am quite impressed. The storylines are very exciting, the aesthetics are great and even though I’ve largely stuck to one specific genre, I think I’ve had a good enough foundation! 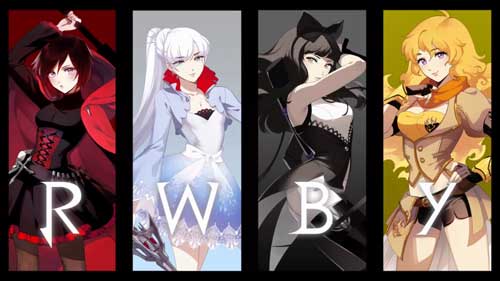 The first anime-type series that I watched was RWBY. One of my friends had this poster up on her dorm wall and after asking her what it was for, she encouraged me to check it out. This was really convenient for me for the entire series is available for free on YouTube. I immediately got hooked and binge watched all four season (plus the supplementary comedy series) in a matter of two weeks!

Now for those who are familiar with RWBY, it might be a bit weird calling this series ‘anime’. It’s in the English language and doesn’t have a complementary manga. However, RWBY does follow the anime style despite not being in the Japanese language. The person responsible for it, Monty Oum, is also Japanese so the influences are quite obvious. Therefore, I will consider it as anime.

Either way, RWBY was everything I wanted. It had stellar action, great story lines and characterization, and it did not take itself too seriously. Perhaps RWBY’s greatest strength is its characterization. Each of the main characters brings something new to the table, all the while forming a cohesive unit.

What shines here is its treatment of the female characters. None of them have to rely on their male peers to get the job done, and each is specially skilled in one way or another. In fact, many of the strongest characters in this series are female. Yang Xiao Long, Pyrrha Nikos, Nora Valkyrie and Ruby Rose are among the strongest in their year and even the villain Cinder Fall is a powerhouse.

Adding to the complexity of the story, the music is very enjoyable. I found myself adding the theme songs to my playlist despite not liking rock music one bit. Some of the best soundtracks are “Time To Say Goodbye” and “This Will Be The Day”.

For someone who had completely refused to watch anything anime related, I am very happy with RWBY. I’ve already watched it three times and will continue to re-watch it. RWBY was a great introduction for me since it combined elements found in the genre while keeping me in my comfort zone.

WHEN YOU GET A DEATH NOTE….

Now my relationship with this anime goes way back. I stumbled across this anime rather randomly, even before I watched RWBY. I only decided to seriously watch it this year and I have never regretted that decision. The animation is well done, the story is fresh and not a single episode felt like filler.

What I loved the most about Death Note is that the main protagonist is one of the best written I’ve come across. Light Yagami stumbles across a book called ‘The Death Note’. This book allows him to kill one person just by writing their name on it. The Shinigami, Ryuk, is the owner of this notebook and chooses to follow Light on his adventures.

The most amazing thing about this anime is how they handle Light’s dilemma with the immense power that he has thrust upon him. He wants to rid the world of evil, but the anime makes sure that the viewer questions whether Light’s actions are justifiable or not. Does instant death truly serve as justice? With his ongoing struggles with the Death Note, Light teeter-totters from being a good guy to being an actual villain.

Death Note is more complex and darker than RWBY but I enjoyed it nonetheless. Its relevance to today’s issues, no matter the country, is noteworthy. Light remains the best written protagonist I’ve come across due to the sheer complexity of his actions and intentions. This series has opened the door for me to look for darker animes, and I am truly excited to see what else lies ahead.

OH, FOR THE LOVE OF BLEACH!

Oh look, another action oriented anime! Bleach has been a delight ever since I started watching it (which is only like two weeks ago). While I would rank it lower than both RWBY and Death Note in terms of plot and characterization, it is charming and exciting and fuses both comedy and action in ways that the former two did not.

This anime’s greatest strength is that the main protagonist, Ichigo Kurosaki, is someone the viewer can easily get behind. His struggle to get stronger and protect his friends from the dangers of Hollows and the main villain, Sosuke Aizen, is truly an inspiration. The writers also try to explore Ichigo’s dark side, as he desperately tries to control a demon that is growing inside of him.

Unlike RWBY, Bleach suffers from poorly written female characters. Perhaps this is due to RWBY being focused on female characters in ways that Bleach is not. Either way, most of the females who do get major roles get heavily shafted, with Orihime Inoue and Momo Hinamori being the biggest casualties. Even Rukia Kuchiki who is written as a warrior, similar to Ichigo, spends an entire arc waiting for the male lead to come save her. But to be fair, Ichigo is heavily overpowered as the series goes on and this can be dismissed as the writers putting too much emphasis on him.
Even with its faults, Bleach is one anime I am ready to recommend to anyone who wants to explore the world of anime. It is light-hearted when it is necessary and serious when it needs to be. The characters are fun and the story is very enjoyable (albeit with a few fillers here and there).

SO WHAT DO I THINK?

After spending months initiating myself into the world of anime, I am very pleased. I’ve explored two genres so far: psychological thrillers and action. I plan on watching more in the future. Naruto, One Piece, Code Geass, Fairy Tail, Attack On Titan, and Full Metal: Alchemist are next. Although most of these stick to the action/fighting genre, I am more than confident that I will see new aspects of Japanese popular culture with each anime. I am glad that I gave anime a chance. It has opened my eyes to a whole new world, and I’m never looking back!
Tags: AnimeBleachDeath NoteRWBY
Share186Tweet116