Don't complain if you get spoiled!

by SLY
in Japanese Entertainment, Manga
4

Note: This article may contain spoilers to those who are not following the manga.

After the legendary battle between the rebels and the (former) Elite 10 Council, the third years have already graduated. Upon Rindou, Eishi, Momo, Somei, and Tosuke’s graduation as well as the loss of Central in the Regiement de Cuisine, it opened the doors for the new generation, or as Senzaemon Nakiri calls, the Generation of Prodigies, to take charge of Totsuki Academy. In chapter 264 of the manga, Megumi revealed the 10th, 6th, 5th, 4th, and the 1st seat of the new lineup, and in the latest chapter, chapter 270, revealed those who completed the list of the current members of the council. 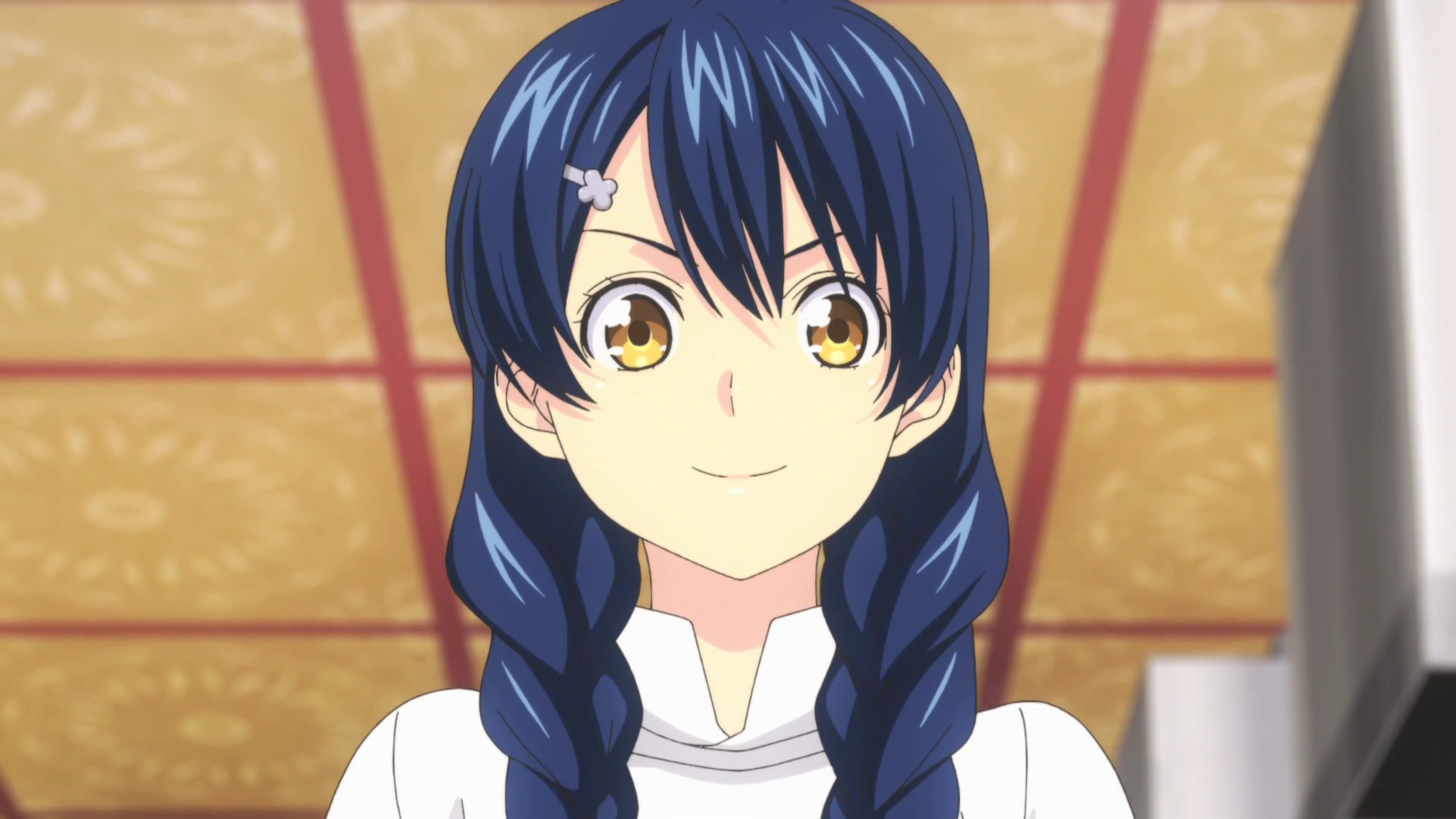 The newest 10th seat of the Elite 10 Council is the sweet lady who grew up beside the port, Megumi Tadokoro. She is one of the residents of Polar Star Dormitory along with Soma, Erina, and Isshiki. At the beginning of their first year in high school, Megumi was on the brink of expulsion due to her lackluster results. It was revealed that the reason why she constantly got E marks was because she didn’t have confidence in herself. Upon meeting Soma, she gained more self-esteem and is now a member of the Elite 10.

In her unofficial match with Kojiro Shinomiya, the other Alumni of Totsuki saw her expertise in handling vegetables and compares Megumi to different spirits in Japanese folklore. They gave the titles “Legumes Koro-pok-Guru (Small creatures living under butterbur leaves)”, “Legumes Zariki-Warashi (Spirits known to deliver good fortune)”, and “Legumes Snow Fairy“ to her. While Shinomiya is known as the Legumes Magician, together, they are named the Legumes Teacher & Student. Her forte in cooking relies on “hospitality”. Just like her personality, she conveys care and comfort through her food with the eater in mind. 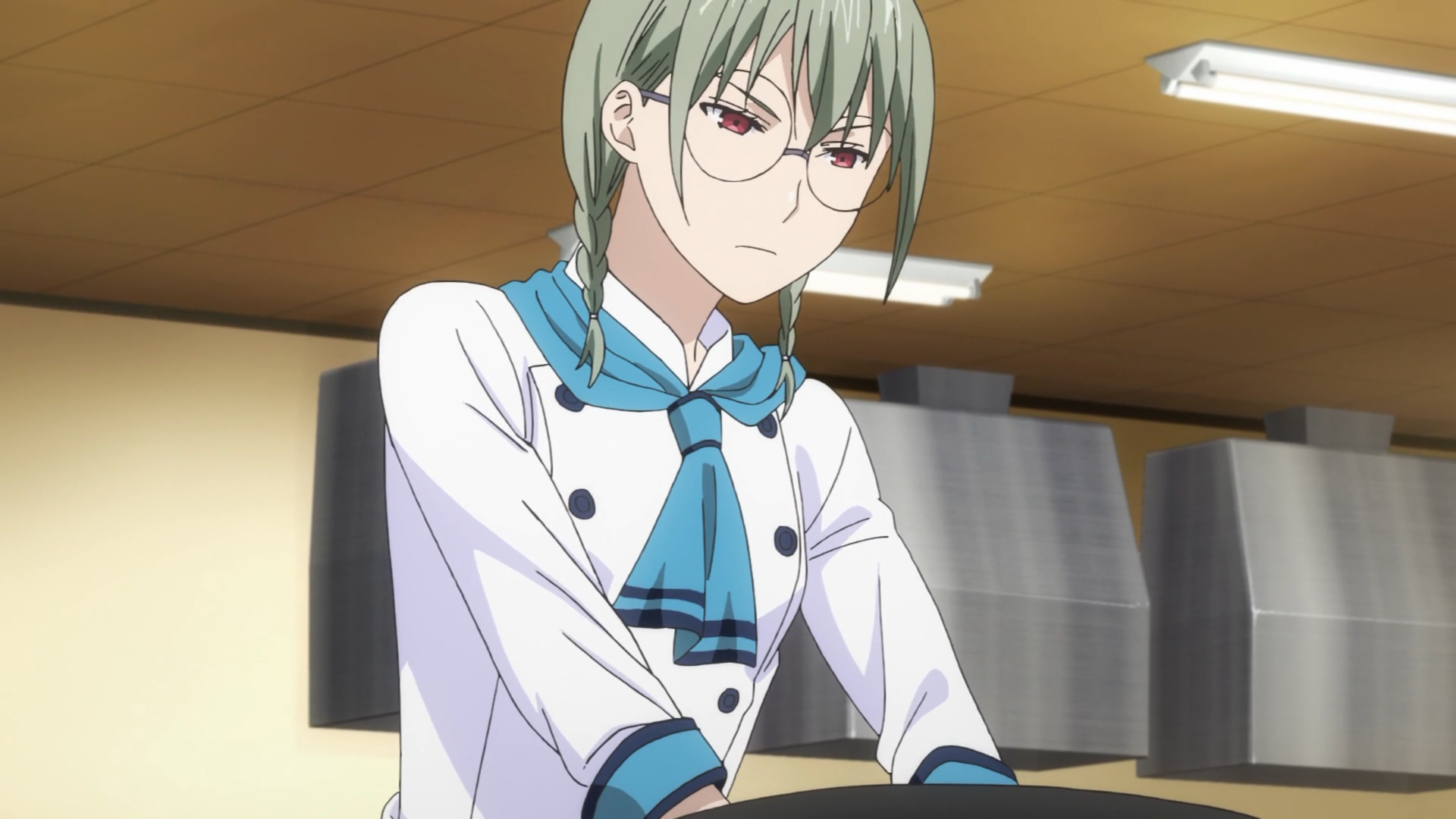 Originally, Nene was a part of team Central and was the 6th Seat of the council. However, upon losing the Regiement de Cuisine to the rebels, she was now demoted to the 9th Seat. She lost to Soma in the first bout of the group Shokugeki. She is the heir of the famous Kinokuni family, which is a known family in the field of Japanese Cuisine.

Isshiki and Nene grew up together since childhood, and after seeing Isshiki doing great at the things she is having a hard time at, he developed an inferiority complex to Isshiki. Her specialty is cooking soba, Japanese noodles made from buckwheat flour. 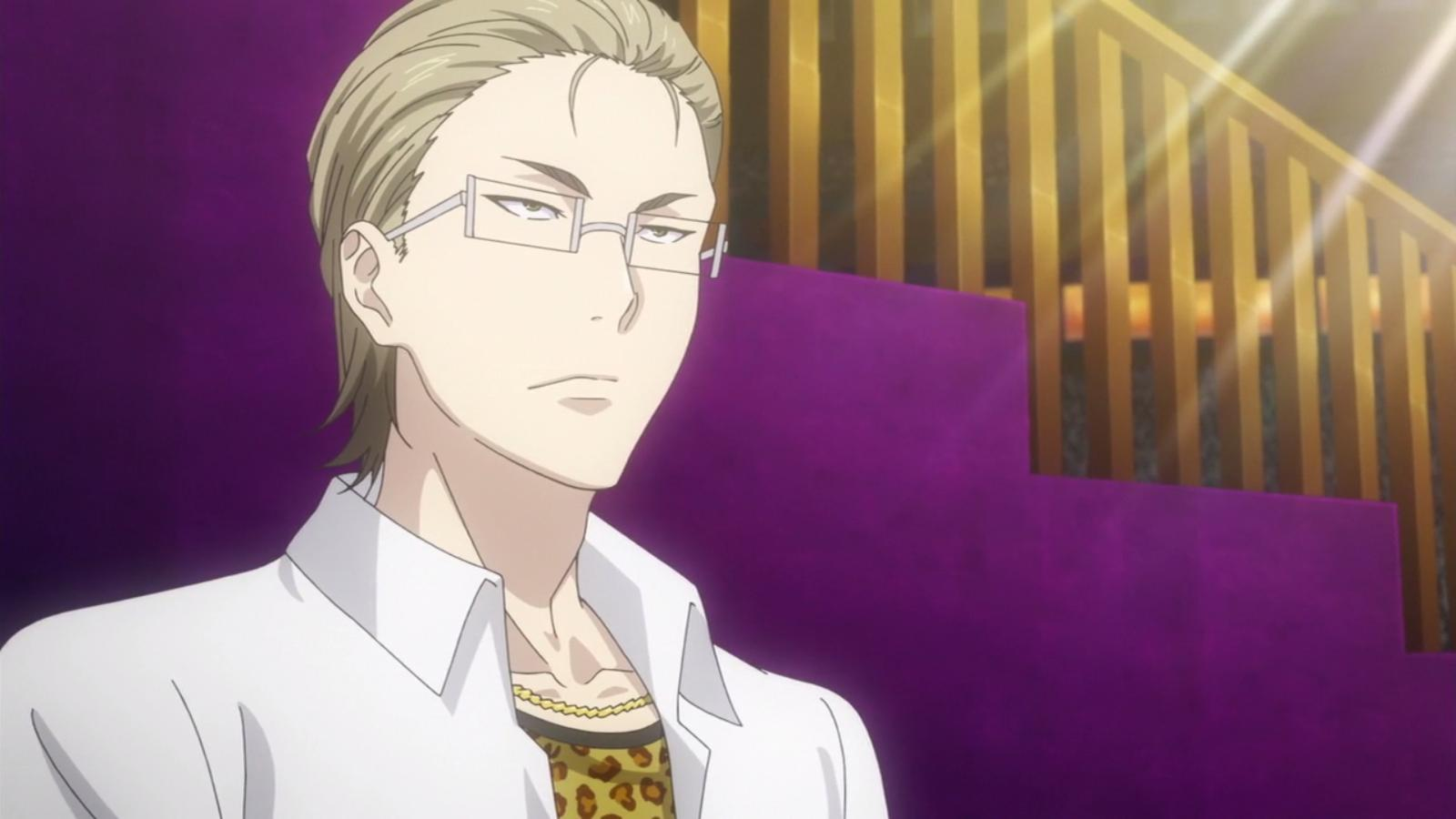 Along with Nene, Eizan is of the team Central, who lost to the rebels in the Regiement de Cuisine. Eizan was the former 9th seat, and was promoted to 7th seat upon Terunori, Tosuke, and Isshiki’s departure. Currently, he is the 8th seat of the council. He suffered a loss against Soma in a shokugeki which was supposed to be rigged in his favour.

He is called the “Alchemist” because of his expertise in the chemical components of flavours and vast knowledge of taste. Because of his talent, several restaurants and figures in the food industry seek out his consultations, bringing himself tons of income. His strategy in shokugeki’s is “negating” the flavours of the opponents, which backfired during his match with Soma. In the Regiement de Cuisine, he lost to Takumi in a showdown of beef dishes. 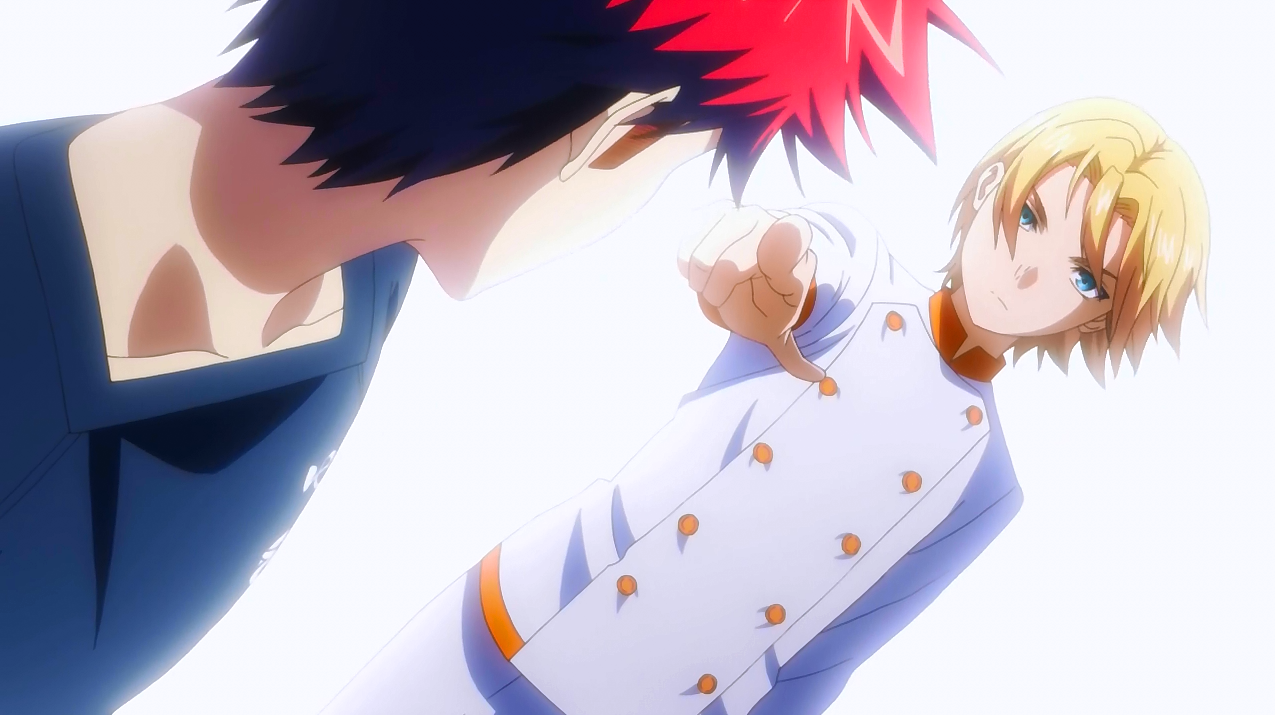 Takumi is part of the rebels that won against the Elite 10 during the Regiement de Cuisine. He managed to beat the famed “Alchemist” Eizan Etsuya. Takumi, along with his twin brother Isami, are chefs in their family restaurant in Italy called “Trattoria Aldini”. He is the self-proclaimed rival of Soma, who coincidentally shares similar sentiments.

His strength in cooking is his wide knowledge of Italian cuisine. He is also a master in using a peculiar looking knife, the mezzaluna, which has a blade in the shape of a half moon and two handles at both sides. He wagered his mezzaluna in a shokugeki against Subaru, and ultimately lost. However, Soma defeated Subaru in another shokugeki and earned Takumi’s mezzaluna back. But still, Takumi refused to accept it, and vows to reclaim the mezzaluna upon defeating Soma one day. Despite being ‘rivals’ with Soma, they both consider each other as best friends. 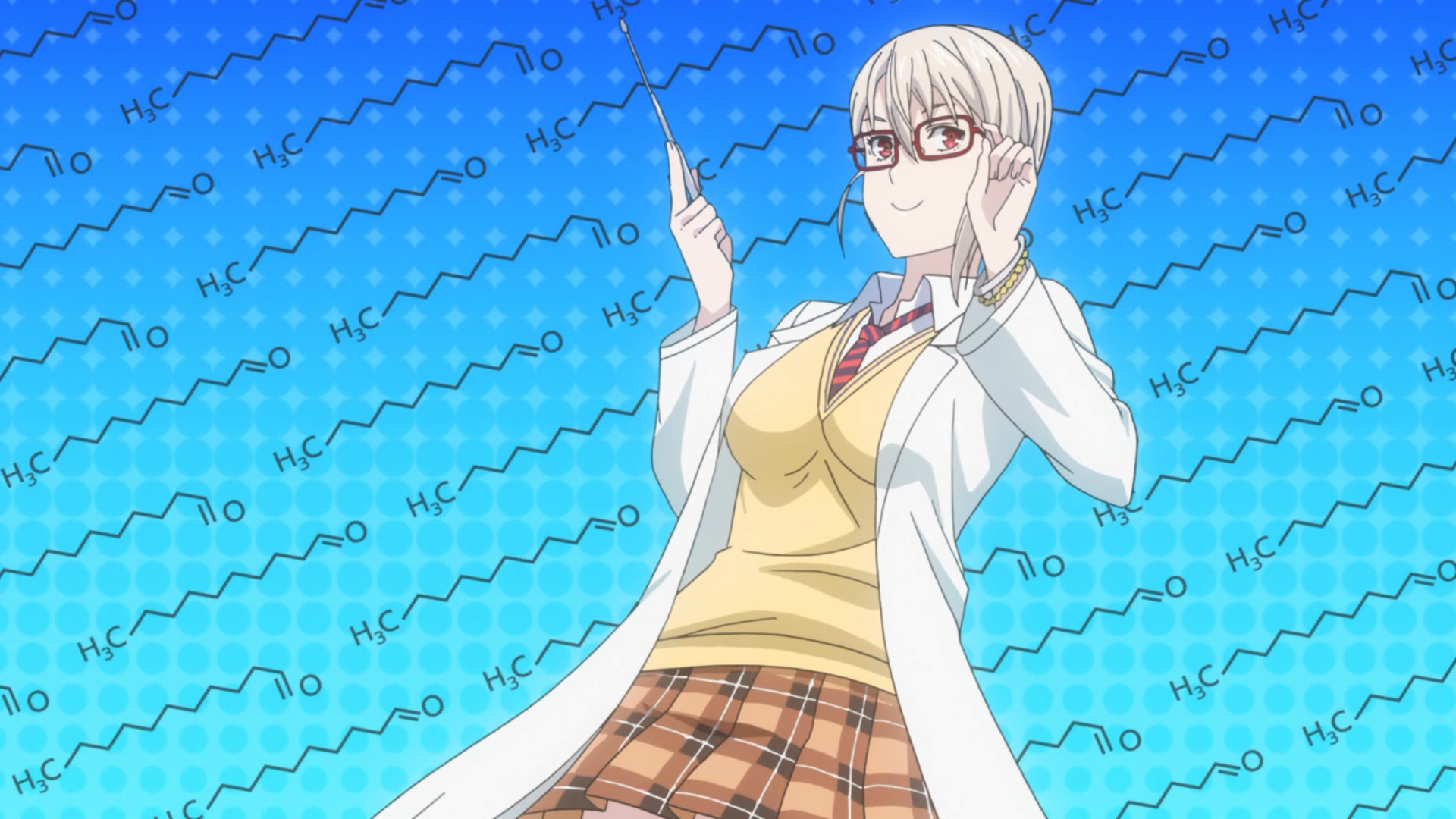 Initially, Alice was expelled during the Advancement Exams where the Central non-believers were fought by Elite 10 members. Things were reversed when the rebels won the Regiement de Cuisine and reinstated the expelled students. Through the reform, Alice was now placed as the 6th Seat of the council. She is Erina’s blood cousin and is considered her close friend since childhood.

Alice is dubbed the “Heaven Sent Child of Molecular Gastronomy” because of her expertise in molecular gastronomy, a sub-branch of food science that focuses on the chemical changes food undergoes while cooking. Due to her family connections and background in the food industry, Alice honed her talent at a young age and became on of the biggest figures in her field. 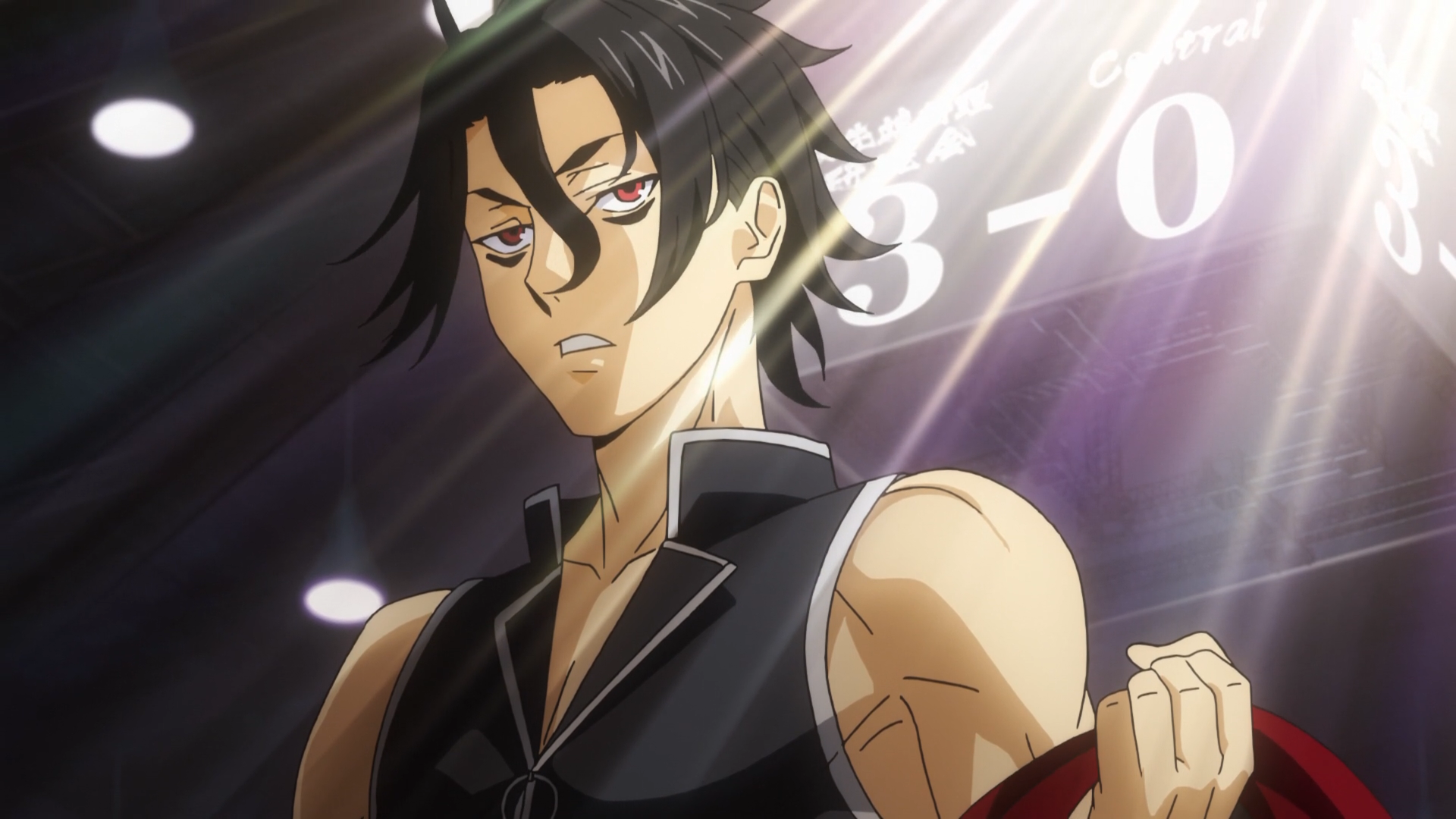 The current 5th Seat of the council is Alice’s aide, Ryo Kurokiba. Ryo in general is a man often seen as gloomy, lazy, and lacking interest in anything that isn’t Alice, but when he puts on his signature bandana while cooking, his personality becomes more aggressive as if he was possessed by a different entity. His seemingly crazy and assertive attitude when cooking earned him the alias “Mad Dog”. Along with Alice, he got expelled during the Advancement Exams. He placed second behind Akira in the Autumn Election and shared the place with Soma.

Ryo as a child was the head chef of a famous pub located at a port town in Denmark. Because of this, he mastered the art of seafood with inclination towards shellfish and crustaceans. 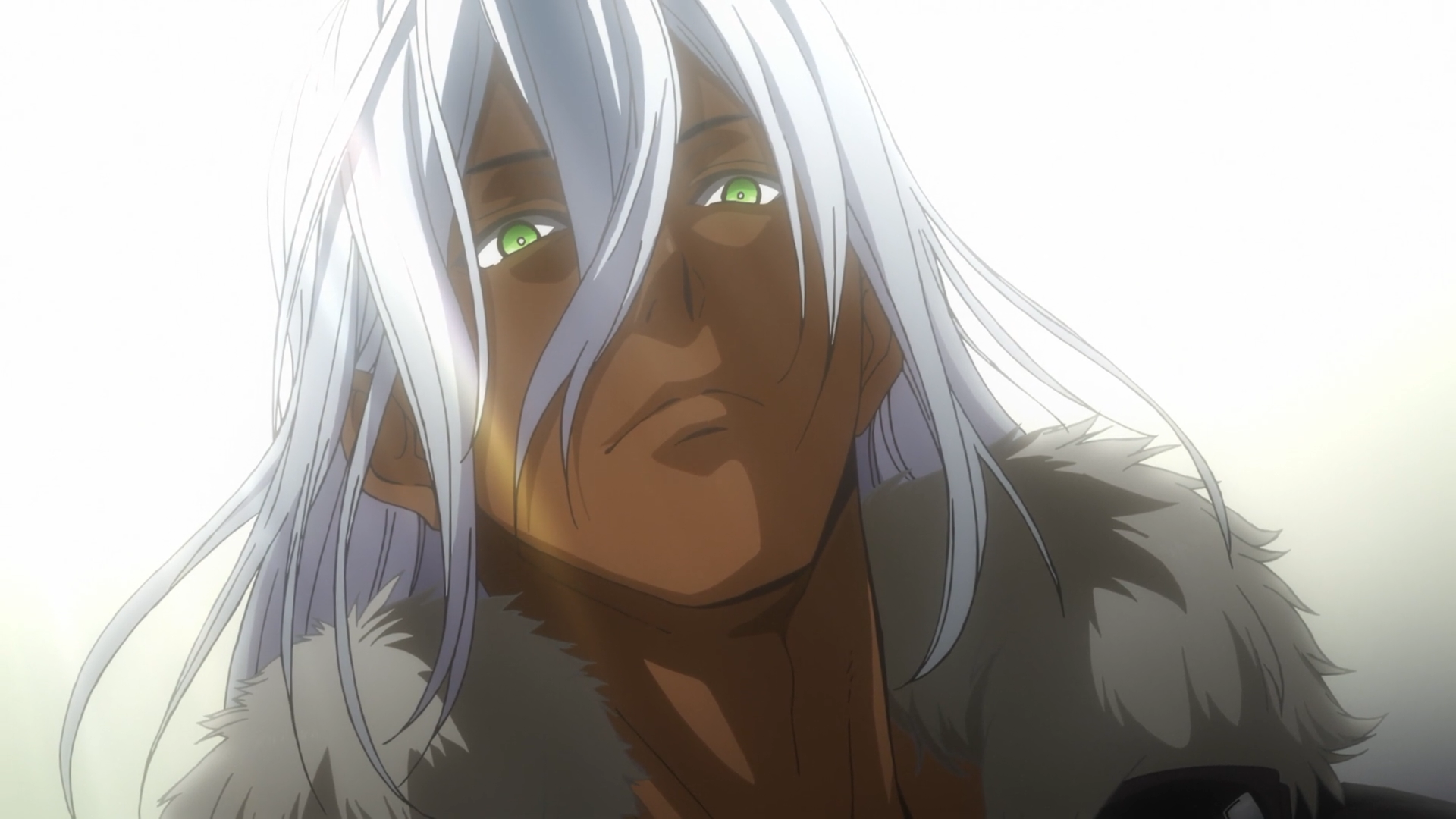 Originally, Akira was already a part of the Elite 10 as the 9th seated member. After Terunori, Isshiki, and Tosuke got kicked out of the council, Akira joined the battle for the three vacant seats and managed to get seated. He did it for his precious someone, Jun Shiomi, who was antagonized by the Azami administration. To keep his seat he had to beat Soma during the Advancement Exams, but ultimately lost and got expelled. The expulsion was reversed when Central lost to the rebels.

Akira is known for being a master of spices. His cooking style focuses on the aromatic aspect of the food he serves. He also masters different spices to enrich the flavour of the dish, as well as enhance its taste. His talent in spices is superb to the extent of the ability to name a spice just from its smell, and to name all spices used in food he tasted. He was the winner of the Autumn Elections, beating Soma and Ryo but forming a close bond between them. 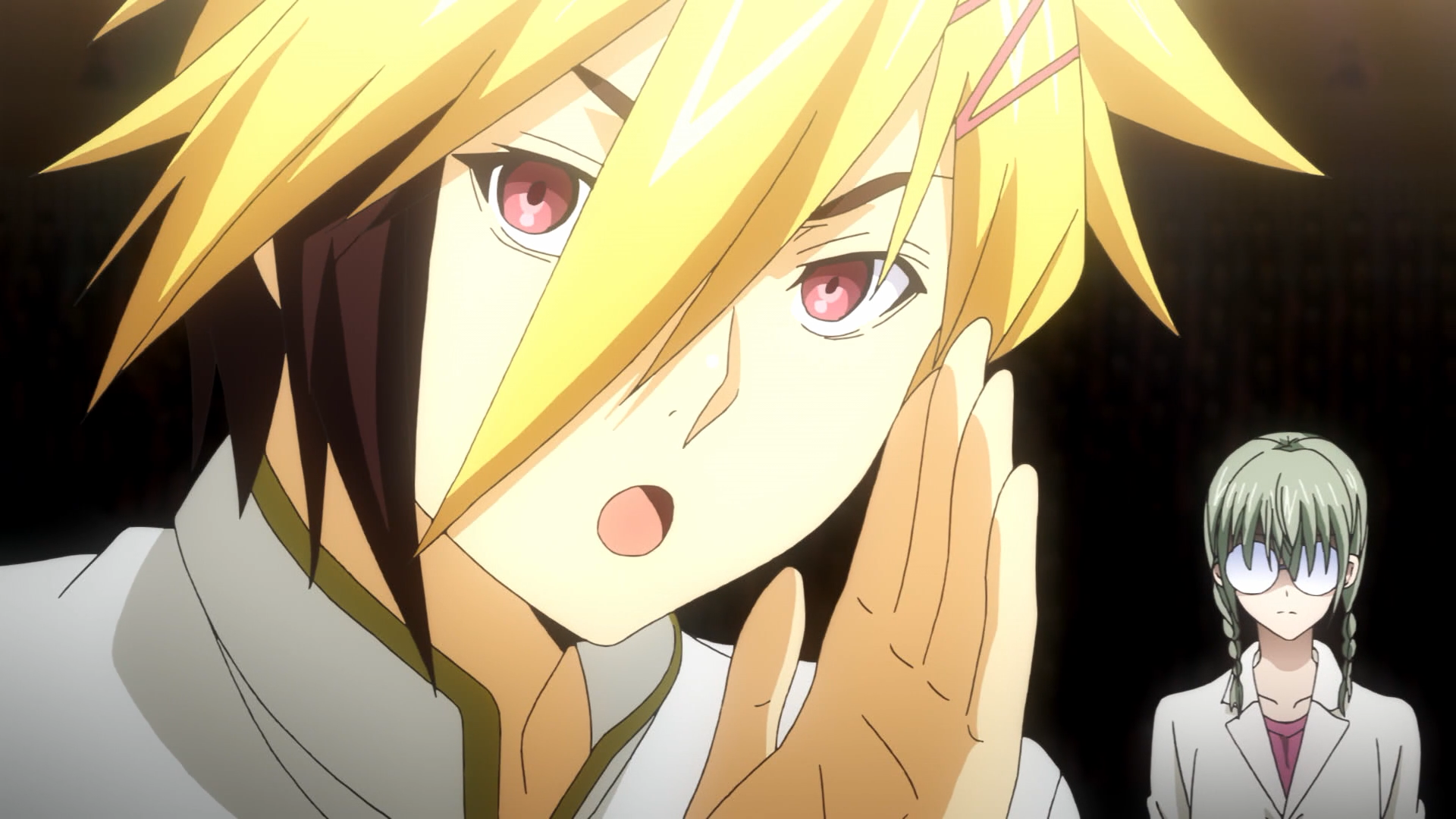 Kuga is the president of the Chinese Cuisine Research Society, a Tootsuki school club that focuses on the research of Chinese food. He is the former 8th seat of the Elite 10, but was kicked out of the council after opposing Azami’s doctrines. He joined Soma and company in fighting Central, and was fortunately reinstated to a higher position.

Being the Chinese Cuisine RS president, his cooking expertise is in Chinese food, more specifically Sichuan cuisine. He is knowledgeable in the use of spices and takes pride in serving spicy food. Because of his talent in cooking, he has a reputation outside of Totsuki Academy, and even got his booth to the top sales during the Moon Banquet Festival. 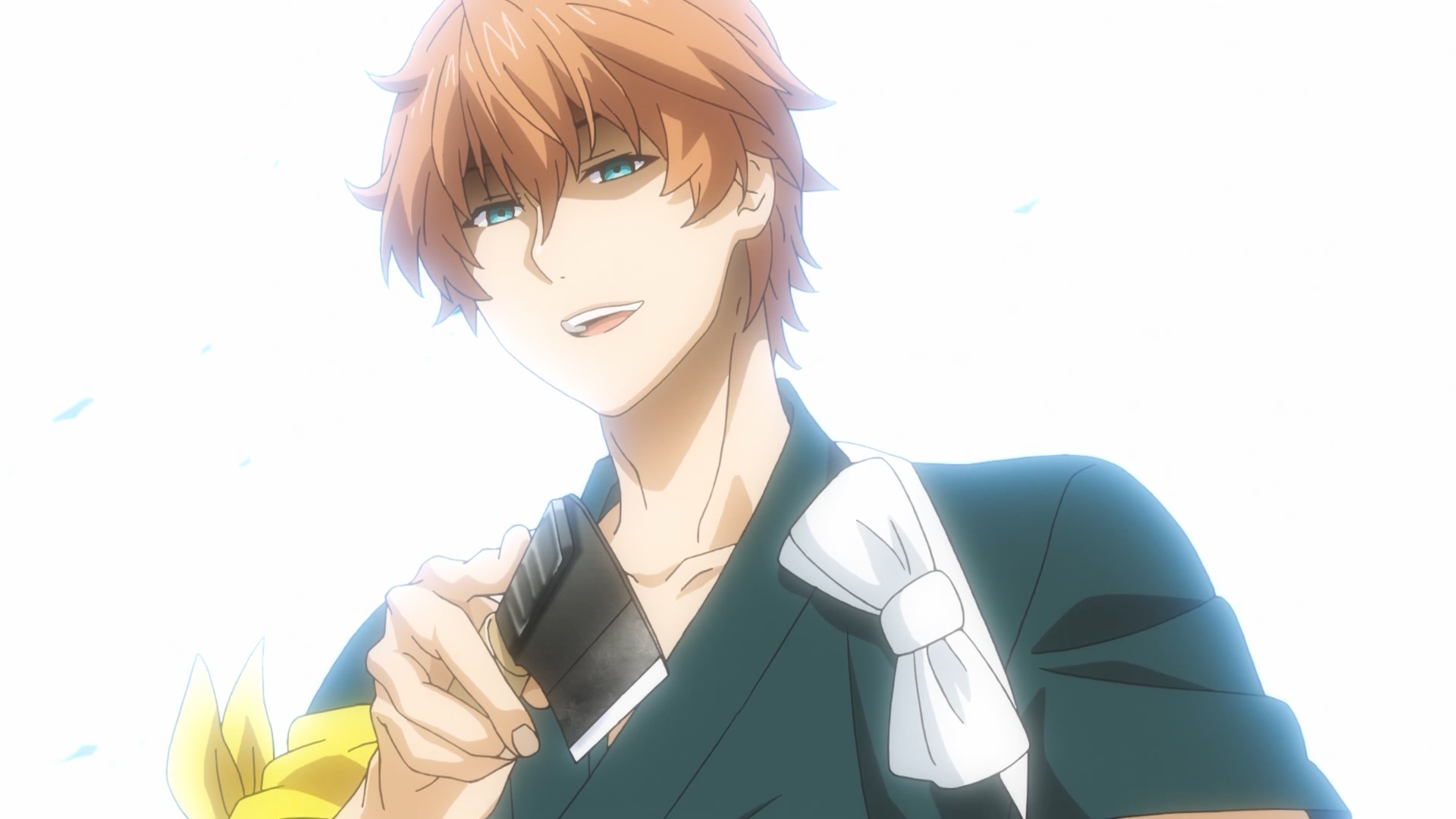 *Gasp* . Along with Terunori and Tosuke, Isshiki was dismissed of his responsibility as the 7th seat of the Elite 10 after opposing Central. He joined the rebels and won against the Elite 10 in the Regiement de Cuisine, and is now reinstated as the 2nd Seat of the council.

Isshiki is a quirky and generally peculiar man of Polar Star Dormitory. He often appears butt naked with only an apron on, or wearing nothing but an undergarment, shocking anyone who sees him. The people in the dorm are no longer fazed by his ‘unique’ fashion sense. He has an outgoing and eccentric personality, but he becomes serious for the sake of his friends in the dormitory.

As the heir of the known Satoshi family, his forte in cooking is in traditional Japanese cuisine. During the Regiement de Cuisine he showcased his cooking talent and gained the approval of the World Gourmet Organization representatives, dubbing his food as “ferociously aggressive Japanese cuisine”. 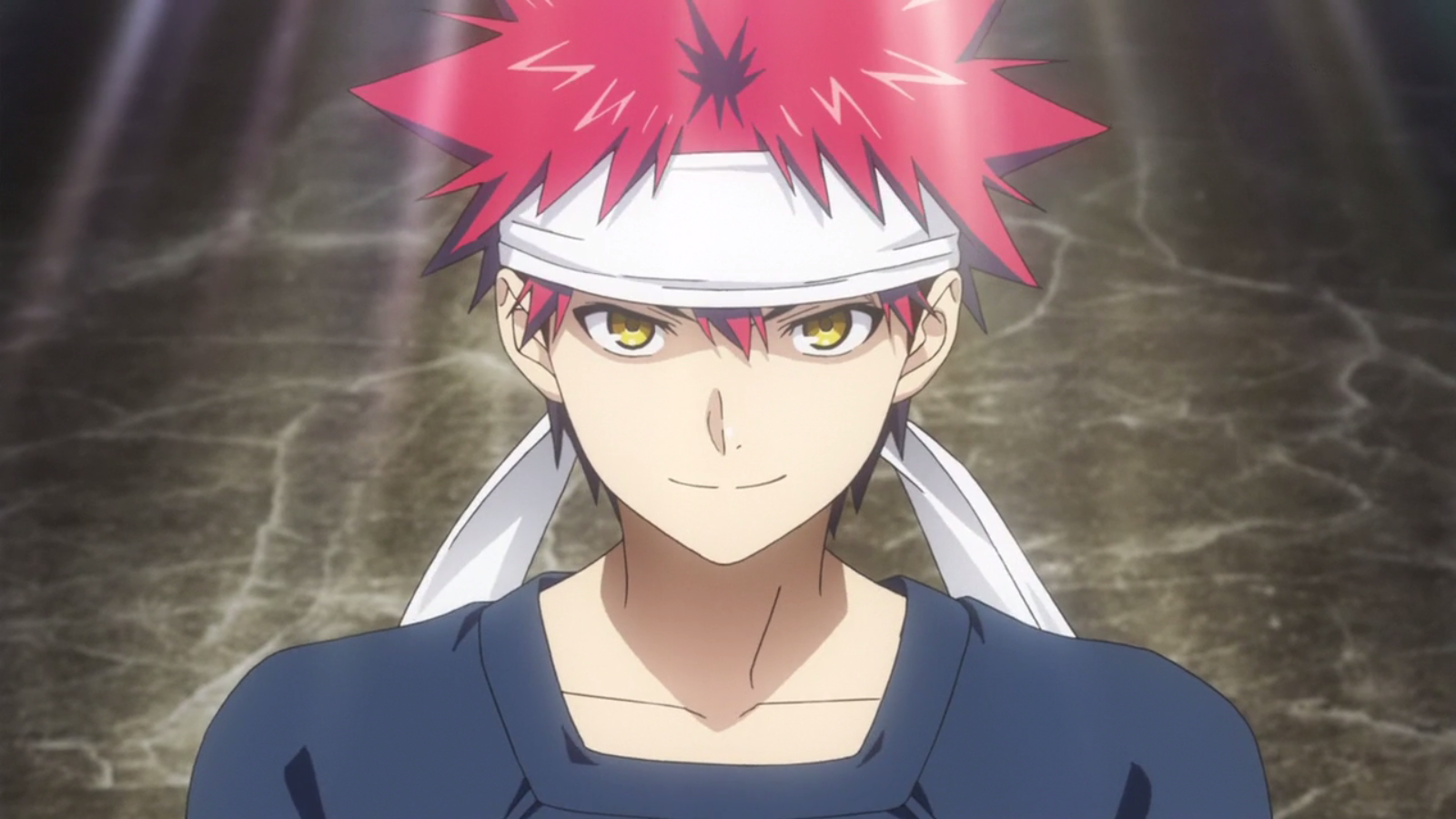 He was the assistant chef of his father, Joichiro, in their family downtown restaurant “Yukihara Diner”. Ever since his childhood he grew in experience in cooking and serving food to customers. He often wears the Yukihara Diner uniform and takes pride in his family business.

His usual cooking style is ‘food that appeals to everyone’, embodied as “Yukihara-style Cooking”. After his Stagiaire at Shino’s Tokyo, he also gained expertise over French cuisine thanks to Kojiro Shinomiya’s guidance. However, his talent does not only limit to French and diner-style food, he is generally superb at any dish possible.

Soma is very reckless and sometimes ignorant, but is nothing but a beast in the kitchen. His cooking skills gained even former director Senzaemon’s recognition. He usually does peculiar disgusting dishes and makes his peers taste them, something he inherited from his father. He also has the talent to overcome any dire situation with creativity and experience.

You must be looking for Erina and wondering why she is not in the list, right? Well that’s simply because she’s no longer an Elite 10 member. 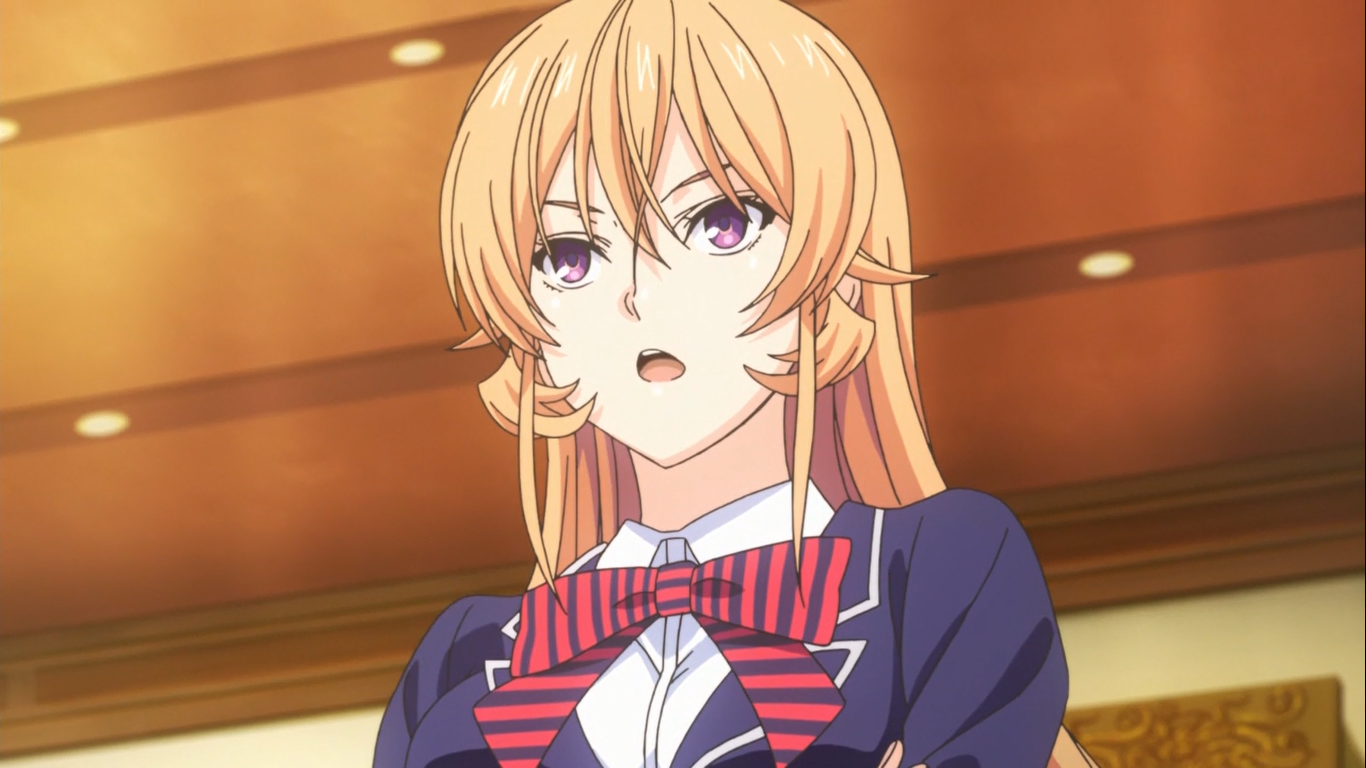 Known as the “God’s Tongue”, Erina, at a very very young age, is the new director of Totsuki Academy. She, along with Soma, managed to defeat Eishi and Rindo in the final bout of the Regiment de Cuisine. She is now the highest ranking entity in the entire academy.

As a child she was deprived of freedom, and had her childhood antagonized by her father, Azami Nakiri. Because of his improper treatment towards his child, Senzaemon Nakiri exiled Azami and was relinquished of his rights to the Nakiri family. However, the terror Azami gave Erina still remains.

When Azami came back to grasp Totsuki Academy within his hands, Erina was one of the most prominent figures in stopping the Central administration. It’s unknown as of now, but Erina had a change of heart and personality when she became a resident of Polar Star Dormitory.

Soma’s generation is truly the ‘Generation of Prodigies’. Isshiki’s generation is also nothing to look down at. Together, those eleven students of Totsuki Teahouse Culinary Academy are bringing the school to advancement and reaching greater heights. Soma finally achieved his goal of being the one on top of Totsuki, but as his ‘brother’ enters the scene, how will things change for him? Special thanks to Shokugeki no Soma Wikia for the images! 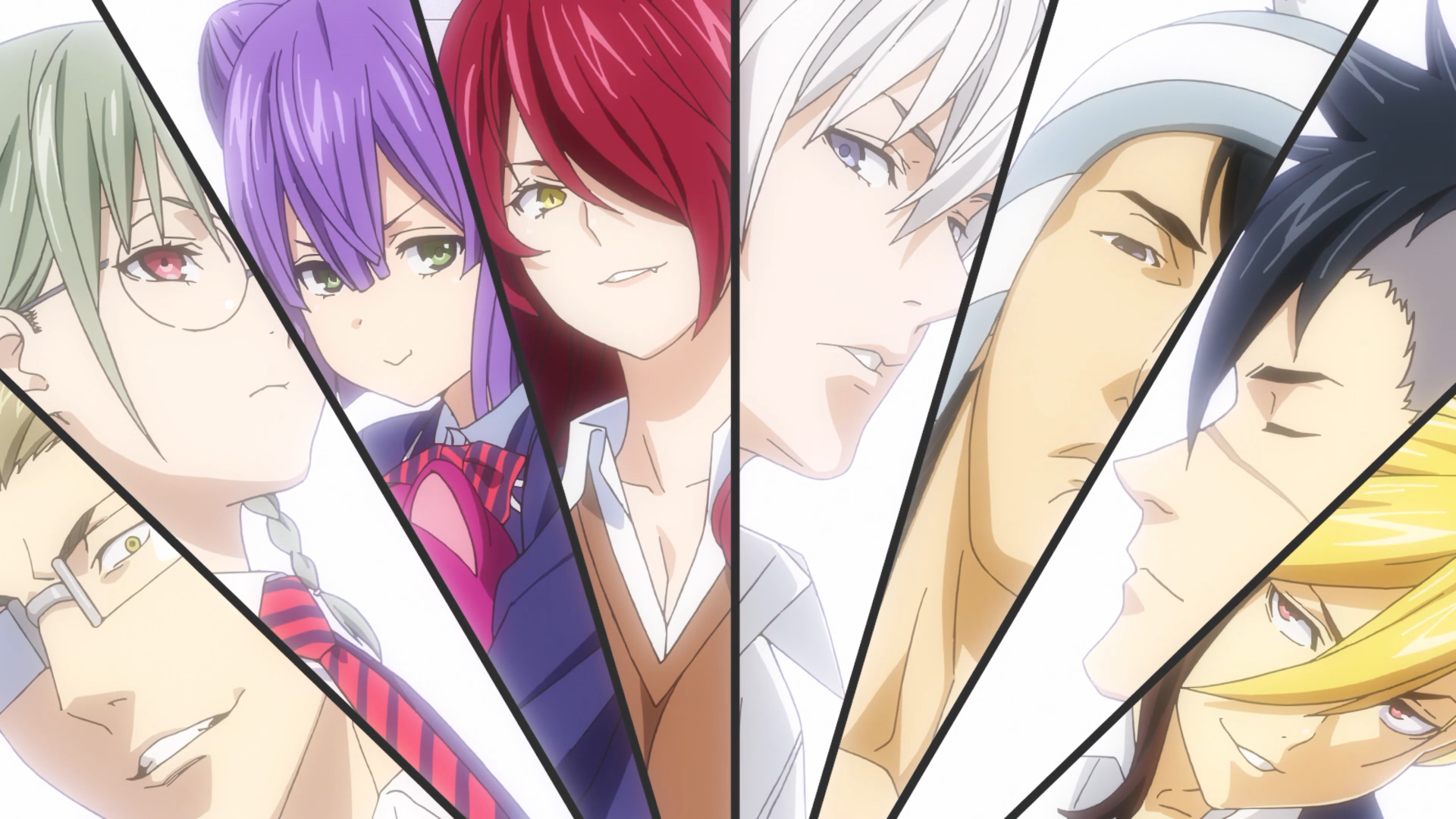