by krusty95
in Korean Entertainment
1

Fourth-year boy group GOT7 touched down in Australia for the first time in April for their Global Fan Meeting tour and changed the lives of thousands of IGOT7’s.

The seven member group graced stages in Sydney, Melbourne, Brisbane and Perth. Promoting their latest release, Flight Log: Arrival at the fan meetings, the boys were without main vocalist Youngjae but still proved why they are one of K-Pop’s leading groups. The meetings featured epic performances, fun games and punishments, interviews, Q&A sessions and most importantly, a photo opportunity or Hi-Touch for gold ticket holders. One gold ticket cost $288 AUD (about 23, 8875 KRW), just to hi-five the boys or stand among a group of 10 in a photo.

Having experienced the last leg of this tour, which Mark described as “the smallest venue in Australia” with the “loudest crowd”, I’ve narrowed down the 10 most exciting moments of the night.

Known as one of the main ships in GOT7, Mark and Jinyoung were punished after losing a game. With a wheel of fortune deciding their fate, the fans were granted with what they desperately want to see – a kiss. The members pushed MarkJin to do it properly but it resulted in Mark smooching Jinyoung on the cheek.

GOT7 has the luxury of three fluent English-speaking members, however it was the other members’ attempts (or lack of) that stole the show. Jinyoung stunned the audience with his improved English, while Yugyeom cutely tried his best. Leader JB, often known for his limited English, got grilled by his members but he handsomely spoke a few words.

Some highlight quotes from the night:

“After I sing Loser I don’t want to sing anymore…I’ll do anything except singing,” he said.

“I have a younger sister, my sister is too strong for you guys.

“My sister likes Kim Woo Bin so too high quality.

“My sister’s bias is Jackson.”

“Of course, I’m okay but I still have a contract with GOT7,” Jackson replied, in response to Bam Bam’s mention of his sister.

“Youngjae couldn’t be here today but he will definitely come back to Australia,” he said.

“I am not perfect…I think all members have a different style,” he said.

“I like sexy guy like Jackson, shadow guy Jinyoung , JB like nothing, sexy and handsome Mark, Bam Bam is a snake and Yugyeom is a dancing machine.”

These acts are the classic, idol group personal talent solos that always garners love from fans. JB, Yugyeom and Jackson showed off their sexy dances. JB covered a snippet of Trey Songz while Yugyeom sung his favourite Chris Brown song.

4. When GOT7 performed Never Ever

GOT7 erupted the stage with their title track, “Never Ever”. Fans were screaming their lungs out as the boys rocked the epic choreography and addicting vocals. However, the absence of main vocalist Youngjae was felt as no member covered his part or took his place in the dance. 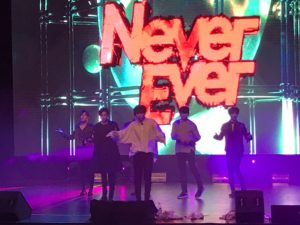 Throughout the entire night, the boys truly shined with their sincere smiles and gestures. They seemed to really appreciate the audience’s energy despite it being the smallest venue and lowest attendance. This was evident during the Q&A session, last messages and of course, the hi-touch where they remained giddy and happy to change each and every fan’s lives with their touch. 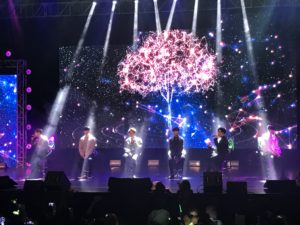 This kid was unstoppable on the night with his constant dabbing coupled with his hilarious English. Yes, he is the dab king but his member’s also did it to perfection as seen below. 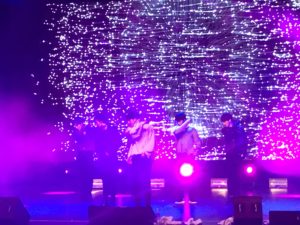 JB cops a lot of flack from his members, especially the younger ones. Bam Bam, Yugyeom and Jackson did not hold back from pushing JB into the spotlight and urging him to do embarrassing things on the night. JB, who seemed like he was a bit tired and overcooked, still provided great entertainment to the fans. 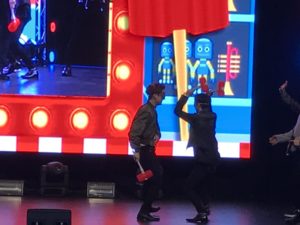 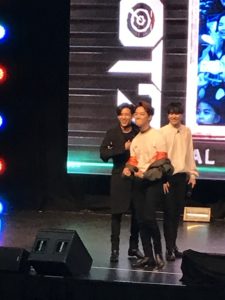 Overall, GOT7’s Global Fanmeeting in Australia was a success. It seemed the boys had a blast down under, just as much as their fans did. Crowds were nowhere near the scale that they’ve performed in front of across the globe but GOT7 still professionally and sincerely delivered their best showing. The boys promised to come back to Australia with Youngjae, so let’s hope it is some time in the near future.