by DazzlingBona보나
in Korean Entertainment
2

Every year, new girl groups enter the competitive K-Pop scene. In 2014, we have Red Velvet, Lovelyz, Mamamoo. In 2015, we have Gfriend, Twice, Oh My Girl. And in 2016, we have the likes of BlackPink, IOI, Gugudan, WJSN debuting. All these girl groups have something in common. They are regarded as part of the rising stars of the new generation. A generation to continue the works of legendary K-pop girl groups such as Girls’ Generation, 2NE1, Wonder Girls, KARA and T-ARA. And in 2017, words are out on the street that Pristin from Pledis Entertainment might just be the next K-pop girl group to take the Korean music industry by storm! 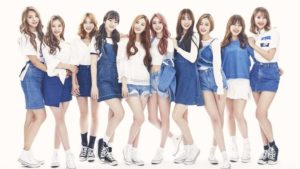 Pristin also known as Pledis Girlz consists of 10 members. The members are none other than Im Nayoung, Roa, Yuha, Eunwoo, Rena, Kyulkyung, Yehana, Sungyeon, Xiyeon and finally the maknae; Kyla. Out of the 10 members, 7 of them were contestants on M-Net Kpop survival Show Produce 101 Season 1 where Nayoung and Kyulkyung made it to the top 11 and joined IOI for a short period of time. Without further ado, let’s learn more about them!

Im Nayoung the leader of Pristin was born on the 18th of December of 1995. She had made a number of appearances in music videos (MV) such as Kye Bum-Zu’s “Game Over”, TROY’s “Why are we” and Hanhae’s “Man of the year”. She also joined MNet’s Produce 101 where she earned rank 10th and joined IOI as their leader. Some of her nicknames are Stone Buddha, Stone Nayoung. Although one can say that she laugh and smile a lot more now. So time to find some new nicknames for her? Warm leader Nayoung perhaps?

Roa also known as Kim Minkyung was born on the 29th of July 1997. She is the lead vocal and visual of Pristin. She was  in Produce 101 placing at a final rank 42th where she was eliminated. A true beauty, watch her capture your heart with ease!

Yuha also known as Kang Kyungwon was born on 5th of November 1997. Her position in Pristin is vocal. She was in Produce 101 where she was ranked 48th. Fans are slayed by her cool image and She look like she can slay a dark concept pretty well! You can literally hear girls screaming for Yuha’s attention now!

Jung Eunwoo was born on the 1st of July 1998. She is the main vocal of Pristin. Prior to joining Pledis Entertainment, she was also a contestant on SuperStar K4 and The Voice kids. She had also made an appearance for Seventeen’s “Manse” MV. She was in Produce 101 where she made it to the final 22 and placed 21th. “I can break all apartments for Eunwoo” came from a aftermath of a Twitter fight between @wbs71 and @pledisgirl and you will be glad to know that they are now the best of friend!

Rena also known as Kang Yebin was born on 19th of October 1998. She is the rapper and vocal of the group. Rena had also appeared in Seventeen’s Manse MV.  She was in Produce 101 where she was ranked 29th. Watch her amaze you with her rapping!

Kyulkyung also known as Zhou Jieqiong was born on the 16th of December 1998.  She is the face of Pristin and was also in IOI after getting placed 6th in Produce 101. She was also in Seventeen’s Manse video. Fans always joke among themselves that Kyulkyung is jealous of anyone that get affection from her beloved Nayoung!

Yehana also known as Kim Yewon was born on the 22th of February. She is the lead vocal of Pristin. She is known among Pristin fans for her bright personality and gorgeous smile. A true bias wrecker!

Bae Sungyeon (Yes we know that she is a real bae) was born on the 25th of May 1999. She is the main vocal of Pristin.  Pristin members are known to love her cheeks and had pinched it with love! Among Pristin Stans, there is a famous sentence ” Mariah Carey Unnie is shaking” that was inspired by her! Her singing is really great enough to shake everyone from head to toes! She was also a contestant on JTBC’s “Girl Spirit”. So do watch it if you can!

Xiyeon also known as Park Junghyun was born on 14 of November 2000. She is the rapper and vocal of Pristin. Xiyeon was in AfterSchool’s “Bang” music video and was also a child actress. She was also on Produce 101 where she was known as Park Siyeon and was eventually placed #25. Xiyeon are jokingly known among Pristin stans as the “leader” of Pristin when Nayoung isn’t around. Well, she do have leadership quality don’t she?

Kyla was born on the 26th of December, 2001. She is the maknae and rapper of the group. Her eyebrows are loved by her fans!

Pristin had released a pre-debut digital single titled as “We” on the 27th of June 2016. “We” was composed by Eunwoo and Sungyeon, and written by Eunwoo, Sungyeon, Roa and Xiyeon. Wow, they are really talented. They had also held a series of mini concerts which the last one was titled “Bye & Live” on the 6th of January 2017 where they also announced their group name as Pristin.  They had also held a series of V-lives on their V-Channel where they introduced more about themselves! Also, be sure to watch their Hi-Cams on their Youtube Channel to learn even more about them! They had also did a series of song covers such as Seventeen’s “Adore u”, Girls’Generation’s “Catch me if you can”, f(x)’s “Rum Pum Pum” and finally IOI’s “Very Very Very”. Sadly, Xiyeon was injured and couldn’t join in the covers. Although she did some MC works to introduce the covers by Pristin in the videos!

Pristin finally debuted on the 21th of March with their title track  “Wee Woo”.  The title track was met with a variety of reactions. Some fans fell in love with it while there was others that was disappointed in it. The fans that are disappointed in it personally feel that Black Widow will make for a better title track.  Personally I love the fun feeling that Wee Woo gave me although I do agree that Black Widow is a gem of the song too!

Alright now that they have debuted, how are they faring? Listed below is a chart of the sales for some of Kpop leading and rising girl groups’ 1st week of sales.

Based on the list, Gugudan have the highest for the number of physical sales  made at 8985 for the first week while TWICE currently one of the Nation’s top girl group are close by at a sales of 8765.  What about Pristin?  Pristin currently at the point of writing had sold 9974 physical albums just at the fourth day thus already performing better than Gugudan in term of physical albums sold.

Will they be the next top girl group? Although they had received  mixed reviews from their title track, I am expecting them to bloom even more from this experience. From the physical sales alone, one can see that they have a dedicated fandom that will be willing to support them and with more promotion, the fandom will grow even bigger which will also mean more sales in return. As long as they continue to come back in the future with even better songs, I won’t be surprised if they end up as one of Korea top girl group. Already, they look like a strong contender for Rookie Of The Year award for the various music award shows that will be held at the end if the year. Am I over hyping them? That is for you to decide. But do give Pristin a chance and I am sure you will fall in love with them! Wee Woo! Stan Pristin!

Man, Produce 101 season 1 and IOI just feels like yesterday, yet now, we are on the fourth season of the Produce series and the third Produce group is already gearing up for a comeback. Time surely goes by...

espressOH! | Is Seventeen’s ‘Holiday’ MV Proof that Director Wonwoo is the King of Found Footage?

Seventeen recently released a special music video for 'Holiday' to commemorate Carats' 1000 day anniversary, directed by rapper and resident nerd Jeon Wonwoo. Little do we know, though, of the true range of Mr. Jeon's talents. https://www.youtube.com/watch?v=rJn8WCCkFqU There is...