INTERVIEW | Feel the Energy with FlowBack

Comprised of five members, TATSUKI, JUDAI, MASAHARU, MARK(half-Filipino), and REIJI(half-Filipino), FlowBack is currently signed under Ki/oon Music (Sony). Back in 2013, together as an Indie group at the time, they decided to audition. In 2014, the biggest audition of the nation, LINE Audition, out of 125k groups, FlowBack was chosen as one of the 8 finalists and gained much-needed attention.

Since their début with “Come a Long Way,” they have found great success with always landing in the top 5 in the weekly Oricon charts and have even gone to release a full album in less than one year. With FlowBack’s catchy tunes and amazing vocals, I’m sure they’ll do even greater things in the future.

Congratulations on your first full album, I really loved FAMOUS and Let’s Get Together. What tracks from the album were your favorite?
TATSUKI: It’s “VERSUS.” The sound is cool but I want you to listen to the lyrics. It’s music that motivating.

JUDAI: It’s “Come A Long Way,” our début single. Compared to when we debuted, the song sounds even better and I like it even more.

MASAHARU: It’s “ByeBye.” The melodic lines are very intimate. The lyrics are also sentimental, and can be sung with emotion.

REIJI: It would be “ByeBye.” from the album.  The melody and the lyrics match perfectly. I really like it.

Do you have any dreams or goals as a group? For example, performing at a certain music venue or collaborating with another artist?
TATSUKI: The group name FlowBack has the meaning of “counter-current.” This implies creating a new flow with your own hands. As the name suggests, we want to create a backflow with our hands and we want everyone to be into us.

I wanted to say that you have grown in popularity within the international J-pop community. Do you have any desires for overseas activities?
MARK: We’d love to engage in activities overseas!  We like foreign music, in fact, there are 2 members who have mixed backgrounds, including myself.  That’s why we’d like to do activities internationally!

What do you guys do for fun on your days off?
MARK: I watch movies, I go shopping for clothes. I go to cafes. Pretty much the things I can do alone.

REIJI: I like to stay active!  I feel uneasy if I can’t exercise and sunbathe (laugh)

Though I’ve seen a few short live digests, I hope to see more live performance videos. Do you have any plans of either having a few on YouTube or to release a live DVD in the future?
JUDAI: We’d like to do it in the future. Right now, all the members treasure nothing but the real aspects and sensations of live show that happen exclusively on the spot and go along with it.

What is your favorite part about singing and performing?
TATSUKI: Expressing our feelings. I feel that it’s great when you can share those feelings with the audience!!

JUDAI: Always having fun while singing and performing.

MASAHARU: To be able to create a song as FlowBack, with FlowBack’s view of the world.

MARK: Through singing and performing, we can convey emotions, thoughts and feelings that are in our hearts.

REIJI: It is “to deliver.” Through singing and dancing, we can give back and deliver the things we cherish. The feelings we want to convey with our songs or with dancing. I would read the lyrics, wondering how I can reach the people’s heart? I’m always thinking of ways to express my feelings.

What is your favorite song to perform?
TATSUKI: When talking about live, it’s “Let’s Get Together.” I like the feeling of enjoying the moment with all your energy, nothing but that single moment with the audience.

I think you guys really fit 90s/Retro music. What is a genre of music/concept that you would like to try?
MASAHARU: Trying to establish a HIPHOP style as FlowBack. From there, we would do ROCK, HOUSE and Future Pop too. I want to adopt various things, incorporating FlowBack’s style and all the trends of that specific moment.

Where do you see FlowBack in the next 5 years?
TATSUKI: Asia Tour!!!!
MASAHARU: I hope we’ll be doing shows, stage appearance in programs and making the best use of our individual and special traits.

A few fans have submitted their own questions for FlowBack

What one word describes FlowBack the best?
MARK: Common Challengers.

Is there a country that you would like to visit?
REIJI: The Philippines! Since I’m half Japanese and half Filipino, I think it would be good if I can share Japan’s good points and how it is a wonderful place. Even without words, you can connect through music and dance! I want to share the fun of enjoying music together with fans.

Did you ever fight over music production like when you don’t have the same opinion about a track or a choreography?
MASAHARU: Never! Even when making a song, I’d ask “How is this?” and the members would casually respond, “It’s a good song” and because we also use keywords, up until now, there has been no fight.

Would you consider a tour in areas such as North and South America or Europe?
MARK: We’re really interested! We hope to do it someday!!

What made you want to pursue a music career?
TATSUKI: Before, I used to transmit my feelings as a dancer, only through the dance moves. When I thought I wanted to express myself and my feelings better, I decided to take the music path.

JUDAI: For a long time, I had no thoughts of pursuing a career in music. I initially joined FlowBack without taking it too seriously, with a light feeling. However, the more I did activities, the more I came to enjoy it, and now I’m completely absorbed in it.

MASAHARU: After trying baseball, soccer and swimming, I would always get tired of them and I couldn’t continue. I was always shy to speak in public. Somehow, I came to love singing. I did not feel embarrassed at all when singing in front of people and had a feeling that I could something different in me. I truly love music and since it was the only thing that could help in expressing myself, I took the opportunity and just did it.

MARK: My parents liked music a lot. It was an ordinary and indispensable thing in our house. I thought I would have like a job that had to do with music, and I would follow naturally that flow of the music I liked.

REIJI: I remember being deeply moved by a singer who was singing on TV. I was completely drawn in just a single moment and it healed my heart. Following the power of music, I also wanted to sing a song that could reach people’s feelings and reach their hearts. I wanted to entertain everyone. I wanted to give myself a supporting push forward. Thinking so, I went down the road of music.

I’d like to thank FlowBack for taking the time to answer all of these questions. Was there something awesome or new that you found about them and what was your favorite track from FlowBack’s latest album “VERSUS?” Leave your comments down below! 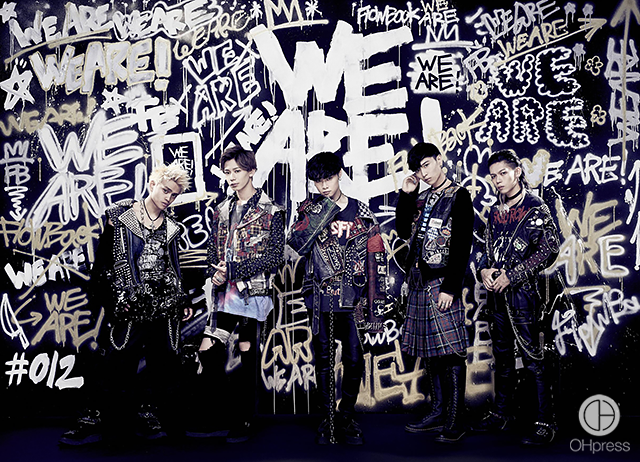