INTERVIEW | Go Wild with the Girls of BananaLemon

by Fatima
in Interviews, Japanese Entertainment
1

BananaLemon has been making waves since their debut of their new music video, GIRLS GONE WILD! BananaLemon is a four-member girl group comprised of Saarah, Nadia, Mizuki, and R!NO. The group is produced by STY, one of the biggest music producer responsible for hits from Koda Kumi and J Soul Brothers, to Daichi Miura and Fairies.

BananaLemon made their digital debut with #SorryNotSorry back in early 2017. They’ve been releasing new tracks throughout 2017 and debuted their first music video with GIRLS GONE WILD on February 21, 2018. This has been met with great international feedback — their music video garnered over 300k views in one month!

Congrats on the release of your new music video “Girls Gone Wild.” It has reached 300k views in just two weeks!
Thank you very much! We are really happy about that! It is really wonderful that so many people, not only domestically but overseas as well, have viewed it. There are now more than 20 thousand “Likes,” and we were surprised by the level of praise and reaction in the comments.

You have gained more international fans and attention from it, what do you guys think about this?
We had always intended to expand our activities internationally but did not believe for a minute that our first music video would receive such acclaim around the world, and to be honest, we are very surprised! Thank you so much. Every day, we look forward to checking the responses from our fans. We will keep striving to become a team that one day will be able to fly around the world and pay back our fans for their support!

Now about the music video itself, what scene was your favorite to film?
We think the things to watch for are the black-and-white cool view of the world and then the colorful dance scenes in the second half, based around the concept of “bilateralism,” which is an important point for BananaLemon. The skillful dancers who often hang out with us participated and this made a really striking scene. Looking at the respective solo dance scenes, Saarah’s Vogue dance and R!NO’s frenetic dance were so impressive that the film staff let out a cheer. As we love fashion, we chose Fenty by PUMA outfits, for which we really like the styling, and YELLO boots. We hope you will enjoy the latest Tokyo style street fashion!

“I WANNA, I WANNA” and “GIRLS GONE WILD” were both choreographed by Rikimaru Chikada. How does his choreography differ from the others you’ve done for your songs?
Rikimaru-san always carefully considers individual stories in his choreography. In the case of ”GIRLS GONE WILD,” it had an Arabian melody and beat so he used the image of a “snake charmer” (laughs). It has quite an interesting structure, and the song begins with R!NO coming out of a pot and at the end, R!NO returns to the same pot. If people who have seen it once, look at it again with this perspective, they will discover something new! Compared to the limber and feminine ”I WANNA, I WANNA,” “GIRLS GONE WILD” added a more macho strength, and portrayed in 3D, it expresses each of our individual charms. We think that the scene in which R!NO is matched with the lyrics about smashing the bulldozer is particularly worth watching! 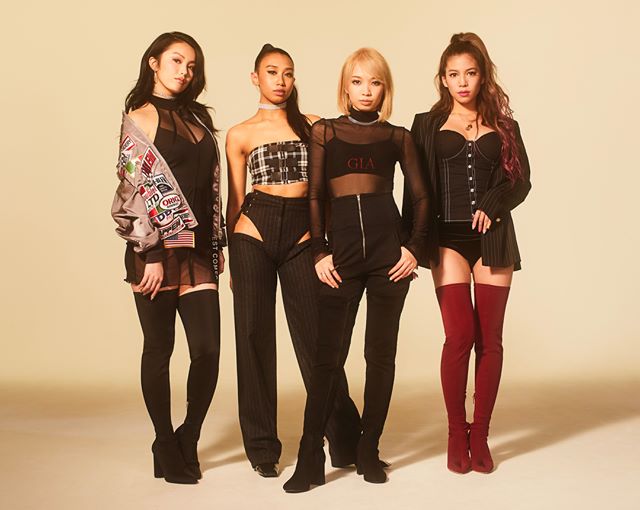 I love the covers you’ve done on Twitter, Nadia, especially your version of Sorry Not Sorry by Demi Lovato. Do you plan to continue #CoverFriday on YouTube in future?
Thank you for listening! Soon we will upload a cover video of a project called ”Nadia’s Sesh!” Are there any songs you would like Nadia to cover? We are open to requests, so please send lots of comments to our Twitters or Instagrams!

Many mentioned the diversity in the group, even though it’s not that uncommon to see that in other J-pop groups/artists. What do you guys think about this?
As we have a wide variety of roots, “diversity” is nothing special, but is something we see in abundance every day. However, nothing pleases us more than our diverse music being able to encourage somebody suffering due to their nationality, age, race or sexuality. We are hoping that the diversity we recognize together in BananaLemon will be recognized in society as a whole, and we are trying to become a group that stands at the forefront of this issue!

In the near future, what do you want BananaLemon as a group to accomplish?
We would like to do more live concerts so that more people both domestically and abroad will come to know about BananaLemon! We have many fans in Asia so we would like to tour each country as soon as possible.

Looking back from when BananaLemon first released music with “#SorryNotSorry” and “Girls,” how much do you guys think you have improved?
In the beginning, when we were formed, we were very enthusiastic in our activities but previously we were acting separately with a different awareness. Recently, though, we have been able to share the ideal of all four of us working as a team and we feel that our bonds as a group have strengthened. #SorryNotSorry has a very different atmosphere to when we filmed our practice video, so we hope you can come and enjoy it on the live stage!

I’d like to thank BananaLemon for taking the time to answer all of these questions. Was there something awesome or new that you found about them and what song do you want Nadia to cover on her new cover series “Nadia’s Sesh?” Leave your comments down below!