J-Pop Artist of the Week: The Gospellers (April 9th-April 15th)

The group was originally formed in 1991 by the members Murakami and Kurosawa in 1991 as a group within their college chorus club “Street Corner Symphony” at the University of Waseda. They recruited three new members (4 members previously left due to their job placement activities) for the recording of their first major label release The Gospellers in 1994, and these members still remain in the group today. 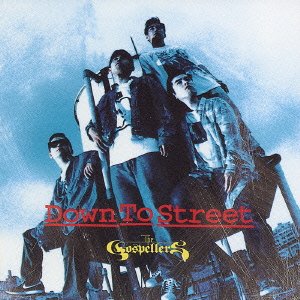 Something in my soul
(Lyrics by: Eriko Kyo / Composed by: Tetsuya Murakami / Programming by: Toru Takeuchi)

The made their major debut with the new members on December 21st, 1994 with the single “Promise”, which was on their first mini-album. It also included the b-side song “JUST FEEL IT”.

The Gospellers are noted for their intricate harmonies, as well as the exquisite musicianship of all 5 members.

Looking for your love
(Lyrics by: Yasuo Yutaka / Composition by: Kurosawa Kaoru)

If you are a fan of this group, please feel free to recommend more songs in the comments below!

You prefer a cappella music with beautiful harmonies as opposed to mainstream groups and with modern pop sounds. If you like girl groups like BRIGHT, you will probably enjoy The Gospellers.

After the release of their self-titled album The Gospellers, the group worked towards gaining more recognition, releasing 13 albums and 5 singles, until they gained their first hit in the single “Towa ni”. “Towa ni” remained on the Oricon charts for 44 consecutive weeks in 2000 and 2001.

Later on in 2001, their single “Hitori” became the first a capella song to land in the top 3 on the Oricon.

In addition to their work as a group, they have worked as composers, chorus, producers etc for other artists, both as a group and individually.

If you have a Japanese artist you’d like featured, leave a suggestion in the comments!

Name The group's name can be translated as "Morning Girls" or "Morning Daughters", and as the name suggests, it is a reference to the age of the members, who are all in their late teens to early twenties. The group's...