Exile lies beyond the clouds.

Every now and then, you encounter an anime that astounds you in one way or another. This is one of those anime. Starting out, we are thrown into an aerial battlefield with enormous fleets bombarding each other without restraint. It appears you are looking at pseudo-futuristic versions of technologies from the early 1900’s, and that is basically, what they are. You wonder about the spectacle being shown and why this is all happening. For a moment, you even forget what you were asking yourself because of the epic scenery displayed. The reasoning for this battle is not told until later on. 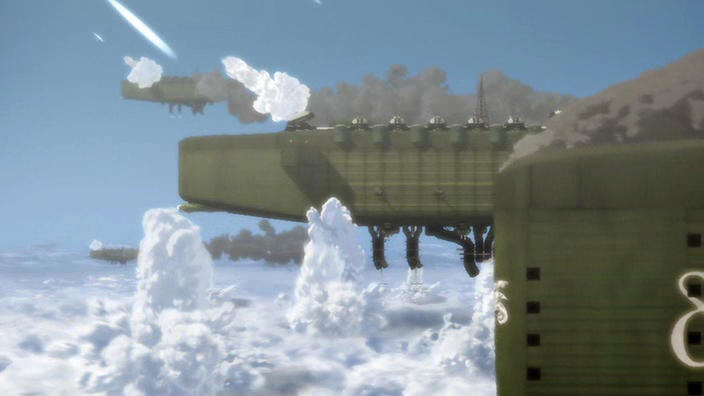 Actually, many things are never explained in the first half of the series. More and more layers are added to the plot, which can sometimes become frustrating to unravel. However, patience is a virtue, and can lead to some very nice rewards.

Last Exile focuses on a myth regarding “Exile”. What Exile actually is will not be revealed until around the last six or so episodes. Keep in mind that where there is a myth, there are people ready to seek the truth behind it. Our main characters are Claus Valca and Lavie Head. Both are lifelong friends who lost their parents. Both of their fathers were pilots. Claus and Lavie decided to avenge their father’s deaths by becoming pilots themselves, and hope to cross the “Grand Stream”. The “Grand Stream” is mentioned various times throughout the anime, and it refers to an area in the clouds where there are hurricane force winds and overall a very dangerous place to be. Our main characters are couriers, and in a low rank mission, they learn of what is happening in the skies. After entering and almost winning a race, they stumble upon a badly hurt fellow courier protecting a small girl from a mysterious ship. This meeting is what sets the gears in motion…

Art wise, it was great. Sure, the CGI can be a bit unappealing because we are used to much more realistic looking CGI. However, you have to keep in mind this anime came out in 2003. In regards to the OST, it had some nice tracks. The opening and ending song were great to listen to. The OP especially because it does not sound like your typical anime OP.

This anime does not like to follow the norm. Deaths are unpredictable, the plot twists are creative, and the characters are unique and represent various humanistic personalities. This anime keeps you thinking and in suspense. Anime that become incredibly predictable are boring and uneventful. There is none of that in Last Exile, which makes for a very enjoyable watch. At times, the anime takes a very dark tone, while other times its light and full of heart. I cannot say I found anything wrong with this anime, except for its slow pacing in the beginning. That is a very minute complaint however. Last Exile is a must watch!