Liked the music video for Golden Touch? Here’s a little info about the singer, Namie Amuro

by Mandilinn
in Editorials, Japanese Entertainment
3

Chances are you’ve seen the unique and creative music video for “Golden Touch” by the Japanese singer Namie Amuro making it’s way over the internet these past few days. Whether you’re a longtime fan, a fan that’s just getting back into her music, or a brand new one because of this video, there’s no denying that the song itself is addicting. But those who are new might be wondering “Who exactly is this singer? Where did she come from?”. This article aims to give a brief history on her career (trust me, there’s not enough space for her entire history. She’s been in the industry for 23 years!) and offer you some other links and helpful resources. Read on!

Namie Amuro is a mixed Italian-Japanese singer from Okinawa that got her start at the age of 14 in the group known as Super Monkey’s. The group was marketed as a “teen idol group with an American pop sensibility”, and their debut song was even titled “Mr. U.S.A.”. They were moderately successful with their first few singles, but they had no major hits. Namie herself began gaining notoriety through modeling and acting, and they eventually changed the group name to “Namie Amuro and the Super Monkey’s”. They got their first major hit in 1995 with a Japanese cover of Lolita’s “Try Me” titled “Try Me ~Watashi wo Shinjite~” (“Try Me ~Believe Me~”). It sold over 700,000 physical copies, landing in the top 10 on Japan’s biggest chart, the Oricon. It was suggested that Namie then go solo, and the group released one more single together titled “Stop the Music” before disbanding and splitting into separate acts (the remaining members of Super Monkey’s went on to become the mature girl group MAX).

Namie released her debut solo single “Body Feels EXIT” later that year under the then fledgling dance music label Avex Trax. It was the first of many singles with producer Tetsuya Komuro, and it became a major hit, landing her at #3 on the charts and selling over 881,000 copies. Her next two singles landed at #1, and her debut solo album “SWEET 19 BLUES” also landed at #1, selling over 4 million physical copies in Japan alone and becoming the highest selling album for a female artist in Japan ever. The album was praised by domestic and international critics, with Ted Mills of AllMusic commending her for her sophistication and maturity, comparing her transformation to that of Janet Jackson. 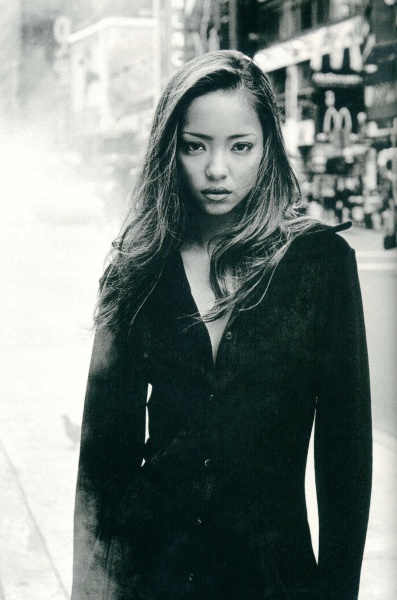 She also became a major fashion icon in Japan, starting a trend called “Amura” that was categorized by tanned skin, dyed hair, miniskirts, and boots. She’s credited for influencing the style known as “Gyaru”, and some of the fads that developed as a result of her popularity are still present today. Her influence didn’t stop at fashion. Her shotgun marriage to TRF member SAM inspired a whole generation of young women to have shotgun marriages!

Namie continued to release hit after hit with producer Tetsuya Komuro, but her sales eventually began to decline. Wanting to make a switch, they parted in 2001, but not before Namie released one last single with him titled “Say the Word”. It was her first time writing lyrics. They reunited briefly in December of 2001 for the song “Lovin’ it (feat. VERBAL)” that was sold raise funds for September 11th.

2002 saw Namie switching genres from pop into R&B and Hip-hop. She immersed herself into the Japanese R&B scene with the SUITE CHIC project, which featured several of Japan’s popular R&B/Hip-hop artists such as VERBAL, ZEEBRA, DABO, and DJ MURO.

Happy with her progression, Namie returned to solo activities and worked with American producers such as Full Force and Dallas Austin for her next few singles. The single “Put ‘Em Up” was originally supposed to be a duet with TLC’s Chilli, but the duet was scrapped as it didn’t fit the image she wanted at the time.

Thanks to her switch to R&B, her popularity began to grow again. Her determination surprised critics, who all but told her before her genre switch that her career as a singer was finished. Her album “Queen of Hip-Pop” sold over a half a million copies in 2005 and earned her a invite to the end of year show Kouhaku Uta Gassen. Singles from her next album PLAY had over a million digital downloads. She won an award for the song “Hide and Seek”, which she performed at the World Music Awards. PLAY became her first #1 album in 7 years, and every album since has reached the #1 position on the Oricon.

Establishing Independence and The Switch to English (2013-Present)

In 2013, Namie established her own private record label under Avex called Dimension Point and announced the release of her 11th studio album FEEL. She began using English in her 20th anniversary album Uncontrolled, but this album featured even more English, which was personal challenge for the singer. She reunited with TLC for the song “Hands on Me” and featured on the Japanese remake of their famous song “Waterfalls”.

The next year, Namie Amuro began the process of separating from her longtime management company, something that is said to be nearly impossible in Japan. However, in January of 2015, she announced that she and her management had amicably separated and she would exclusively be managed by her own staff and Avex. She announced her first album away from her management, titled “_genic” on April 3rd. _genic will be her 3rd bilingual album and her 12th studio album overall.

How influential is she now?

Soloists as a whole have slowly declined in Japan, but Namie has remained on top. She’s been the top-selling female soloist for several years, and in a recent poll, it was discovered Namie is the most widely-recognized act in Japan after the groups SMAP, TOKIO, and Arashi. Her concerts sell out year after year, and she continues to be a fashion icon for young women. In 2012, the press named her the “unstoppable diva”, and it seems that title holds true because she shows no signs of slowing down anytime soon. ☆

Want to know even more about Namie Amuro? Check out the links below and any leave questions or comments you may have!