by Wasta
in Editorials, Korean Entertainment
1

The ongoing Korean webtoon “Winter Woods” takes a new twist on the story of Frankenstein in a manhwa that is a clever mix of heartwarming and disturbing. With beautiful art and characters that you won’t quite be able to figure out, this comic raises all the right questions on what it means to be human and how these beings learn to love.

Jane Reina is a prospective writer that has yet to find success publishing her work. Her greatest struggle is trying to create original content and think of stories to tell, which she blames on writer’s block. Despite her constant failure, she is still a lively and energetic woman that shows compassion for those around her. However, she does have the tendency to mooch off her friend Sarah. Her passion for life is particularly attractive to Winter, as he finds himself drawn to her light and energy to fill the empty space where his heart should be. She is the one who gives Winter his name and teaches him what it means to be human, through her own flaws, insecurities, and kindness.

Winter Woods is an alchemist’s experiment gone wrong who has lived much of his life during the modern era in captivity and under the surveillance of scientists. Living most of his thousands of years of life in isolation, away from human beings, lends him his childlike mentality and social incompetence. He can seem rather blank at times but slowly learns to express his emotions, both positive and negative, through the influence of Jane. His oldest companion is an animatronic bird name Roy that was also created by his master. 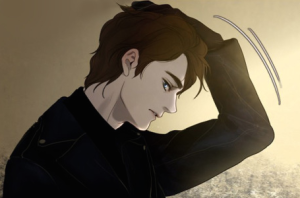 A mysterious man with a rather gruesome line of work, Zoe Lev is tied to Winter’s origins in an unimaginable way. His past, and his suspicious motivations, are very unclear initially. As the story unfolds however, his troubled past becomes more clear, even as he attempts to change from his ways of death and destruction. He cares for the girl Adora deeply (even though he is often outwardly cruel to her) and tries to change himself at her wish. He is very interested in Winter and demonstrates a curious jealousy for Winter’s ability to become human and learn to love. Zoe lacks the same empathy and heart that Winter is slowly starting to gain.

Adora is a blind girl who lives alone but often has Zoe’s company, who she is in love with. She has a very keen sense of smell which she uses to identify her settings and people around her. She is kind and forgiving to a fault, especially when it comes to Zoe, who saved her life in a backwards sort of way when they first met. Adora has also shown a sharp intelligence and her calm and peaceful demeanor belies her dark past. She has a fear of being locked in a dark rooms because she is reminded of emotionally scarring memories, which Zoe exploits to his advantage.

Plot: In a past many years before the modern era, an alchemist lived happily with his expecting wife, wanting little more than a family. But when both his wife and child die during the mother’s labor, the alchemist is driven mad. He seeks to create his family by using the only means he has: the remains of other dead humans, dug up from their graves. He pieces together an “experiment” but this boy lacks one vital organ, a heart. The alchemist deems him a failure that cannot love like a real son after 1000 attempts to stitch this crucial aspect of a human being into his body. After spending his whole life, trying to make a son who he could love and be loved by, the alchemist dies believing he had failed. However, this boy, upon realizing his master is gone forever, cries and refuses to leave his master’s side, even when the alchemist has long turned to a pile of bones. That is, until May 4, 1945, when this boy is discovered by soldiers during World War II and eventually taken away to be examined for scientific purposes.

Time jumps to the present, modern-day world and this “experiment” has been given a new number, EL-01, as he is kept isolated and studied by a gaggle of white lab-coat wearing scientists. One scientist, Hubert, takes pity on EL-01 and smuggles him out of the facility. Hubert leaves EL-01 in front of an apartment complex with a note containing the contact information for Jane Reina and tells him to be free and live his life as he wishes. 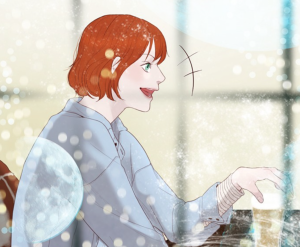 Meanwhile, Jane Reina herself meets with her friend Sarah. Jane becomes disheartened when her story script is again criticized and called juvenile. When Sarah asks Jane if she is willing to do anything to get the most thrilling story to finally get published, Jane agrees passionately, unaware that she may be sealing her fate. When Jane arrives home, she sees EL-01 and is frightened by his ghastly appearance, initially rejecting him. EL-01 himself is suspicious of her, after being manipulated for his entire existence. However, Sarah’s words ring in Jane’s mind and she ultimately convinces him to live with her, along with his prickly animatronic bird companion, Roy. Surprised at his lack of a name, she decides to call him Winter Woods. 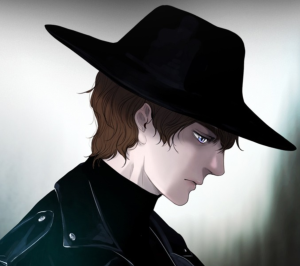 Over time, Jane begins to record Winter’s dark past in bits and pieces as he slowly opens up to her. However, there are others around Jane who are unlike what they seem, such as her oddball neighbors. Even her friend Sarah led Winter into Jane’s life for her own gains. To complicate matters, Winter befriends the girl named Adora whose ties to a mysterious man named Zoe Lev may prove dangerous to Winter and his companions.  Winter must adjust to his new, blossoming feelings for Jane while learning what it means to be human and live in a world where life is so precious and fragile.

Review: This webtoon is currently in its second season, so the story is still an ongoing endeavor with some mysteries yet to be revealed. As such, this review will be based on the illustrations and events of the first season.

To begin, the art is absolutely phenomenal. One of the most impressive things about Korean manhwas in general is their tendency to use full color for all panels of the comic. The artist of “Winter Woods”, Banji, certainly knows how to utilize screen tones and color to their advantage. I actually began reading this manhwa after having only seen a few screen caps of the characters: the artwork is that captivating. However, even if the art is the first thing about this webtoon to grab your attention, it’s the story that won’t let you go.

As for the storyline and characters, I think they are refreshingly dark, if slightly unbelievable. The plot itself is an interesting mix of fantasy and fact with its modern setting and undead protagonist made from pseudo-science. The Frankenstein trope has been wrung through the washer in countless renditions, reboots, and adaptations but Winter’s origin story is unique enough to not be cliché and it still will surprise you as more is revealed. While the prologue may portray it as a standard tragic past for the lonely hero, Winter’s gradual confessions contradict this. As the manhwa progresses, the clearer it becomes that is character, and those around him, are not what you initially think them to be. 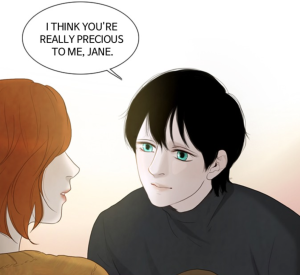 It is easy to visually see Winter’s transformation into a human because his ghostly pale skin and dark circles and lips slowly warm to the complexion of a living being. But his evolution is so much more than a physical one. He has to learn to trust again after being abused and gawked at for his entire life. Winter experiences emotions he never knew existed before, especially as he develops romantic feelings for Jane. This is all occurring as he tries to forge friendships with new people around him, such as Adora, and finally confront people he has let push him around for ages, like Roy. He struggles to fully comprehend the human heart especially, and is sometimes unintentionally cruel because of this. Winter can switch so fluidly from his adorable childlike persona that is fascinated with the world to a disturbing sociopath when his lack of understanding for humans gets the better of him.

This webtoon in general is a strange mix of feel-good and absolutely terrifying. Outright violence and gore are rare, but when they appear the author doesn’t hold back and the effect is rather disturbing. I think that is part of the charm of “Winter Woods” though, because the characters continue to surprise you. You’ll start believing Winter really is innocent and misunderstood and then an ugly part of his past will be revealed that causes you to question everything you know about him. But there is still an underlying hopeful theme present in this manhwa that encourages the idea of moving beyond mistakes and the past and instead looking towards a happier future.

Conclusion: Even if the story is not typically something that appeals to you as reader, I would still recommend this manhwa, if simply for the beautiful artwork. That being said, I do think the plot and characters of “Winter Woods” themselves are a huge benefit to the webtoon and will intrigue you through their complexity and strange motives. There are some poignant lessons to be learned about love and humanity present in this webtoon and I think that in itself makes “Winter Woods” a meaningful read for anyone.

Where to Read It:

Heesu in Class 2 is a fluffy, wholesome tale following Heesu's first and second loves. Prepare for an easygoing story void of unnecessary drama and toxic tropes.

espressOH! | “July Found by Chance” is the Most Beautifully Self-Aware Manhwa

There is an ever-increasing number of high school romance stories in both print and media, with fewer and fewer actually managing to bring something wholly new to this genre. But July Found by Chance, an ongoing webcomic by South Korean artist...