Everybody knows Jackie Chan and his distinctive martial arts choreography. His name alone possesses enough weight to carry an entire movie single-handedly – with the right marketing. Hell, the man is probably rich enough to do anything he wants to. Like create a K-Pop group. He probably doesn’t even really give that much of a shit if he loses money there. His real power has always been generated from the silver screen. His latest work, Kungfu Yoga, a Chinese-Indian co-production, has all the makings of a blockbuster, and proved itself as such by dominating the international box office in February.

But I’ve never regretted contributing to a box office number so much in my entire life.

Recommended for: People with way too much time on their hands.

NOT recommended for: Anyone, in my humble opinion.

Kungfu Yoga’s cinematography is a bit of a mixed bag. Nothing truly stood out, either in a good or bad way.

The film opens to a CGI-driven introduction, possibly for reasons that were related to the impossibility of gathering that many elephants for the purpose of a battle without backlash from animal rights activists. It’s unlikely to land a spot in a list of films with the greatest use of CGI. I mean, if you’re a stickler for impeccable, believable, impactful CGI, then go straight ahead and skip this film, don’t pass GO, but try to collect $200 as compensation. Otherwise, it was decent. The CGI animals were pushing it but at that juncture, it was apparent what kind of film Kungfu Yoga strove to be.

Kungfu Yoga’s screenplay is where shit hits the fan.

The first part of the film was a blur of vaguely unimportant sequences of events, many of which could have easily been deleted from the film without undercutting the plot in any way. The first sign that Kungfu Yoga pays homage to Indiana Jones was a female student who clearly had a crush on Xiaoguang (Lay), and later approached him with a heart drawn on her eyelid. It’s an obvious reference that’s slightly wasted on Xiaoguang, whose characterisation was one-dimensional. Then again, most of them were.

At some point, Jack decides it’s a brilliant idea to court death by approaching a pack of wolves to demonstrate kungfu – because of course that’s what you should do whenever you come across several wolves in the wilderness. If it’s some reference to EXO and the most embarrassing moment of their careers, it’s at least a relief when Lay’s character does not literally dance with the wolves. Thank god for small mercies. 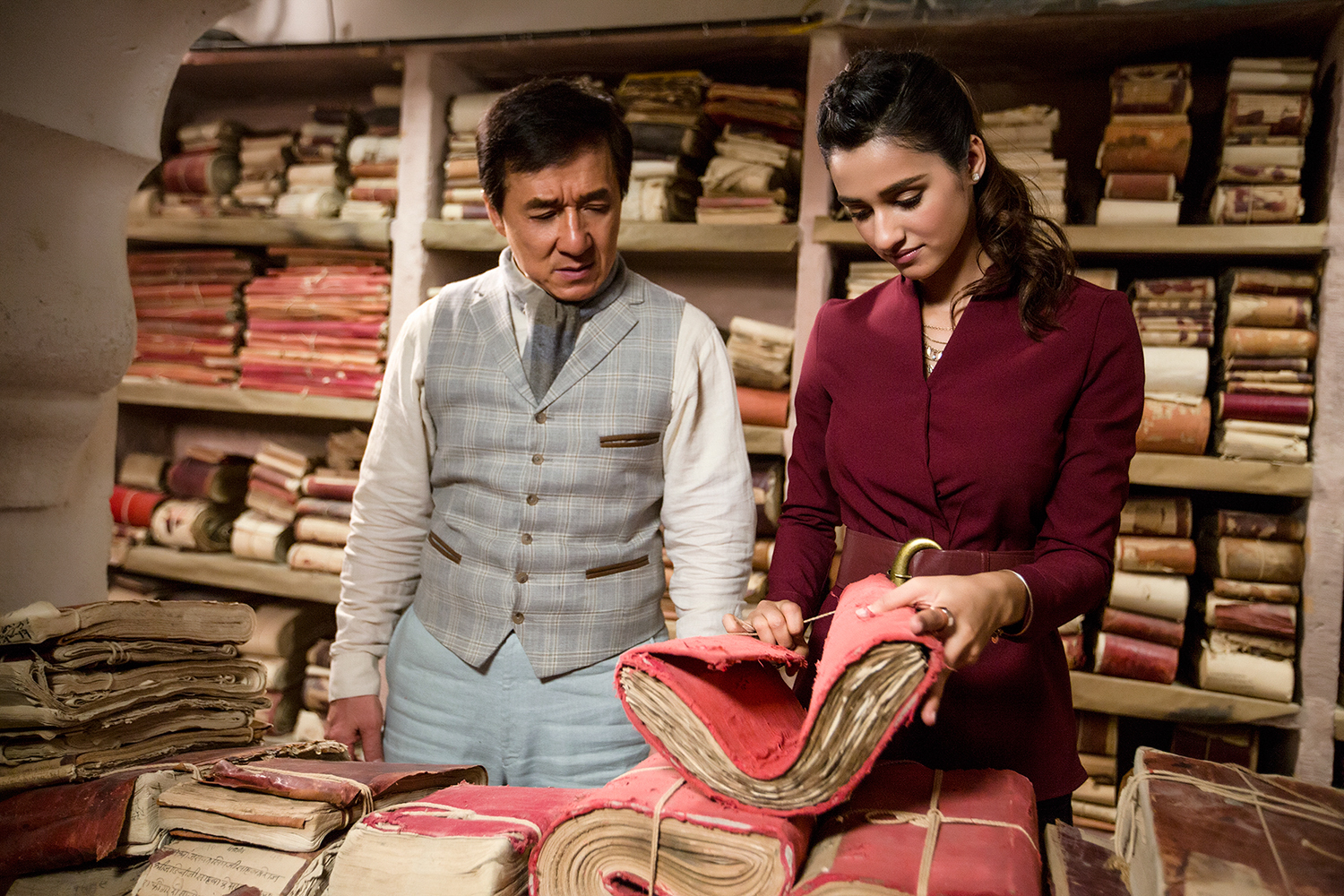 I sat up in my seat a little, though, when the girls started fighting for themselves towards Kungfu Yoga’s climax. Damsels in distress have started going out of style in recent narratives, but girls kicking ass still hasn’t gotten old for me. Still, this was when I realised that the film missed a clear opportunity to incorporate more of the Yoga part of its title. I could count on one hand the number of times it’s actually been forefront to the film’s plot progression. Meanwhile, nearly every bit of the film is steeped in kungfu.

But if I thought the film could potentially be saved by some satisfying good old ass-kicking (with girls!), it managed to wipe its own figurative derriere using my dollar bills as toilet paper by throwing in my face an ending so stupid that it instantly redeemed M. Night Shyamalan’s post-Sixth-Sense career. How does it end? Well, Jack parroted the film’s inspiration Indiana Jones’ belief that knowledge belongs to the entire world (that is, a museum)… and the villain was suddenly cool about it. And then they fucking dance.

Listen. I grew up with Bollywood and its colourful, improbable musical numbers, and loved it. A little bit of dancing wouldn’t have bothered me in the slightest with the right execution. But in Kungfu Yoga, it only underlined the utter stupidity of Randall’s sudden 180-degree change in character and deprived audiences of any sort of pay-off. He went through all of that trouble just to be okay with sharing? It’s stupid. It’s completely stupid. I’m livid. More than a week later, and I’m still pissed. I’m probably going to be pissed about it for a long time.

Was the film funny at least? It evoked laughter from a few of my fellow cinema-goers here and there, but not from me.

If there was another silver lining to this movie, it was kind of nice not seeing Jackie Chan paired with bumbling Western co-stars whose characters seem to know next to nothing for once. Kungfu Yoga’s diversity and change of scenery had promise. If only it didn’t actually suck. Even Rush Hour 3 didn’t suck this much.

I don’t make it a habit of walking out during the middle of a movie because I always figure that since I’d set aside this much time for a movie, I should at least see it through. But I hadn’t been that strongly tempted to do so since Man of Steel. I lose in the end, for the second time, because I paid for both movies. Thanks a lot, Stanley Tong. Jackie Chan may trust you, but I definitely don’t.

The two boy groups, who in fact are very close friends in real life, made names for themselves with one being global hits and the other being hailed the "Kings of Concepts" in K-pop. VIXXO (the two groups' fan-coined...