Vampire Cleanup Department returns the jiangshi genre, featuring the Chinese hopping vampire, from the days of old Hong Kong horror flicks to the silver screen. Although a little predictable, it’s a lighthearted film with dialogue that’s likely to charm audiences. And it will, in all probability, continue doing so at the Brussels International Fantastic Film Festival and the Fantasia International Film Festival.

Recommended for: Those who enjoy their scares mild with a dash of goofy humour, and/or are keen on revisiting the days of old Hong Kong horror films

NOT recommended for: Anyone squeamish at the sight of (fake) blood

Orphaned since birth, Tim was raised by his grandmother, a seemingly insane woman with a penchant for garbage, literally. But he’s kept in the dark about the true reason for his parents’ passing until the truth bites him in the ass, also literally. That is, when he survives a vampire attack, largely unscathed. It’s then that Tim finds out about the Vampire Cleanup Department (yes, VCD), his parents’ past as vampire slayers, as well as their sacrifice that saved Tim, and granted him his immunity. He is then presented with an ultimatum: either join the VCD, or drink tea that would help him forget everything about his past, à la The Matrix’s red pill/blue pill.

However, he crosses paths with a vampire, Summer, who throws into question all that he learns about her kind. She regains some semblance of a human form from drinking Tim’s blood in an imitation of a kiss — and yet doesn’t attempt to feast on his blood or harm him in any way. Summer does retain the typical vampire bloodlust, but the only blood she craves is pig blood curd. Against all odds, the two fall in love. But of course, things get complicated along the way.

Vampire Cleanup Department probably isn’t going to scare hardcore horror fans. If anything, the film is more comedy than horror (even if I did hide behind by sweater sleeves in the first quarter of the film), and that’s what it delivers. Its tongue-in-cheek screenplay and delightful cast members made the experience worthwhile, even if the ending fell a little short.

The film shines best in its screenplay’s playful little salutes to old cinematic tropes and references. Films featuring the undead slowly making their way to their prey are far and few between, especially since the advent of sprinting zombies in Danny Boyle’s 28 Days Later. Even Yeon Sang-Ho’s Train To Busan‘s zombies could give Usain Bolt a run for his money. But, Vampire Cleanup Department reintroduces the hopping vampire from ye olde days of the jiangshi boom in Hong Kong back in the 80’s and 90’s. And just like the old days, its vampires can be controlled by talismans stuck on their foreheads. These talismans appear to be made of paper, which comes to no surprise when they inevitably get blown away. And that’s how our Tim ends up harbouring Summer, the vampiric fugitive, and later falls in love with her.

As you might’ve realised by now, this part of the film is strongly reminiscent of Jonathan Levine’s Warm Bodies. Funnily enough, its sense of humour isn’t too different from Warm Bodies either, albeit delivered slightly more effectively than the latter. Babyjohn is a far more natural comedian, working alongside other capable actors.

However, where the film delivers in humour, it falls short in its overall narrative flair. Anyone with a couple of brain cells could have predicted the return of the vampire that Summer had been discovered with, as well as the outcome of Tim’s dilemma. But even then, predictability itself isn’t quite its Achilles’ heel — it’s its climax. Here, Tim and the VCD predictably put their differences aside (with regard to Summer) to save the day. Okay. But when Tim is in danger of being bitten by the vampire, Summer somehow manages to break free from her shackles to save Tim with the Power of Love™. Apparently, she only seems to be able to conjure superhuman abilities whenever Tim is in mortal peril. It’s a ridiculous trope that adds neither humour nor inventiveness. Instead, it takes away the film’s bite and effectiveness. It’s nice to see her break out of her damsel-in-distress mould, but it’s clumsily executed. 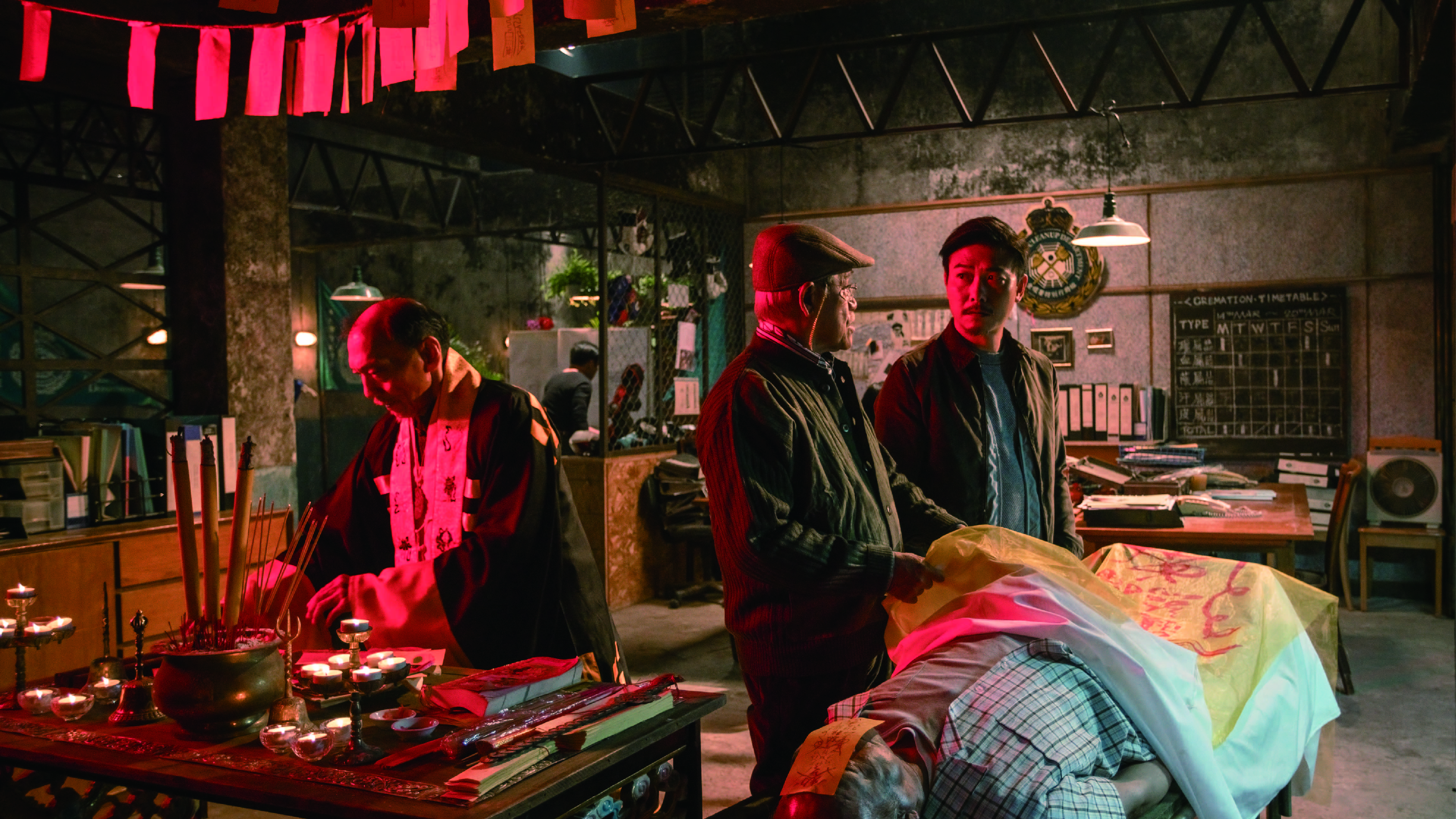 Jiangshi vs Western Vampires vs Zombies

Even with its flaws, Vampire Cleanup Department is a pretty enjoyable take on the jiangshi genre; it, interestingly, further blurs the lines between the traditional jiangshi, classic Western vampires, and zombies. Several old jiangshi cinema did appropriate Western horror tropes into their narratives, presumably in a bid to add marketability. But Vampire Cleanup Department‘s vampires fascinatingly seem to exhibit traits found in all three of them.

The way its vampires work seems more reminiscent of your typical zombie’s modus operandi. Humans are viciously attacked, then seemingly die, before rising once again as the undead, and continuing the chain. On the other hand, classic vampire narratives usually center around a sire (one such famous character would be Dracula) that turns one or more humans, and bonds with them. Yet, there seems to be none of that in Vampire Cleanup Department. Either that, or the VCD folks were just that efficient at cleaning up vampires before any sort of legitimate hierarchy could be established. For instance, Summer never showed any loyalty towards the vampire she was found with. It’s possible that Tim’s blood simply dissolved any bond that could have existed between her and the other vampire. Still, we also know that Summer was buried with him, alive and clearly against her will, given the scratch marks in her coffin. Hmm.

But of course, Summer does exhibit typical vampiric bloodlust. She did like pig blood curd. This is different from traditional jiangshi, a corpse that absorbs qi, or life force, from its victims. They don’t drink blood. Instead, what Summer shares with the jiangshi is their hopping, to hilarious effect.

It’s basically a bit of a Frankenstein’s monster of a film. And it works for the most part.

Vampire Cleanup Department is no groundbreaker, but its campy humor and clever cinematic references make for quite a fun ride. Lin Min-Chen is sort of adorable as Summer the vampire, even if she doesn’t really get to deliver any lines. I don’t know if I would’ve fallen in love with her though. She would’ve been incinerated pretty quickly before I could even get to know her if I were in Tim’s shoes. But personally, I would’ve chosen the blue pill in the first place — ignorance is bliss sometimes. Anyway, if you like films like Joss Whedon’s Cabin In The Woods, you’d probably get a kick out of this one.