Yes, mobile games. Any experienced gamer will know mobile games are the ultimate bane of our existence. In fact, anybody who has played at least one mobile game should know better than to step on that forbidden soil again. Easily accessible? Check. Criminally addictive? Check. Filled with overpriced P2W micro-transactions hidden behind a misleading “F2P” label? Check.

Yet here we are. And these are our favorite mobile games. We need help.

I spent about 15 minutes staring at the screen while drafting this, trying to pinpoint a single favourite mobile game but then realised just how difficult it is to pick one. Bitches be like ‘oh I don’t have time I’m so busy’ and then somehow still manage to waste time on mobile games. It’s me, I’m bitches. So I’m going to pick three from different categories.

Among otome games, the one I enjoy the most is probably ‘Ikemen Sengoku’ by the Japanese firm Cybird for two main reasons. One, Nobunaga is a fine specimen of a drawn image and I have a profound appreciation for art. Two, who wouldn’t enjoy the prospect of unrealistic and romanticised historical figures falling in love with a feisty main character whose agency isn’t taken away from her? Don’t answer that. My favourite, oddly soothing time-waster, though, is ‘Cats are Cute’ by South Korean developer Kkiruk Studio. You would probably have to like cats at least on some level to understand its appeal. But apart from amusing little mini-games we play with the cats, there’s just something pleasing about its minimalist monochrome design and simple gameplay. All it requires is some intense tapping.

Finally, my third pick is… the ‘SuperStar’ series because I’m a basic, pedestrian K-pop listener who likes tapping the screen mindlessly. My first foray into the world of rhythm games was the Tap Tap Revenge series before its eventual demise. SuperStar filled that gap in my heart. Years later, and the SM version is still on my phone along with the Pledis one, and people finally beat Luhan90’s scores. I’m not like other people who are very much game enthusiasts in every sense of the word, but I still enjoy playing some mobile games—especially when I’m stranded in a road traffic jam or simply bored. One of the games I didn’t feel any ounce of guilt wasting my time was Monthly Idol by 608Factory. Basically, Monthly Idol is a simulation type game that gives you the experience of running your own entertainment agency.

From promoting your artists to be detected under the popularity radar up to deciding on what concept they’ll have for their comeback, Monthly Idol will give you a taste of what it feels like to be a CEO. Did I forget to mention that it also has an award ceremony too? Overall, Monthly Idol is a fun game for those people who want to be entertained and challenged all at the same time without the expense of losing your sanity. Start stretching and popping your fingers because it’s time to snag all the daesangs for oppars! Want a true mobile asymmetrical survivor experience? Identity V is ready to serve you some thrills, chills, and strategy. Made by NetEase Game Studios in Guangzhou, as well as receiving direct input from the main managers from popular asymmetrical game ‘Dead By Daylight’, Identity V starts out by pitting you with three other survivors. Your main aim? Escape from the enclosed map. Your enemy? The hunter.

As you play on, you will unlock more survivors with more abilities and then have the chance to play as the hunter, where the roles are reversed as you painstakingly try to attach the survivors to balloon chairs to prevent escape. Heck, I’ll say it right now, this game never gets boring. As time goes on, you’ll develop more strategies to either strike survivors or avoid hunters and with a full-blown ranked mode, you can competitively play to reach the top of the ranks. Not to mention an annual eSport event where your clan fights to beat other clans and win the grand prize of 380,000 yuan is up for grabs. And yes, there are clans as well.

Plus, there’s no Pay-To-Win! Unlock characters for free by playing the game, do everything essential for free. The game literally incentivises you to play, which allows for the game to become rewarding and enjoyable. New updates every week add a plethora of options, with past updates such as the Junji Ito collaboration, Persona V collaborations, new hunters and survivors as well as new maps bringing fresh air to an enjoyable game (not to mention the new storylines and theories).

Give Identity V a try! As someone who mainly plays on consoles and gets bored with mobile games easily, the only mobile game that stuck with me for many years is Puzzle & Dragons. I honestly downloaded the game back in high school from the Japanese iTunes shop because I wanted to practice reading kanji. Sadly, I couldn’t switch over to the Japanese iTunes for some reason to update it, so I continued playing the U.S. app.

Puzzle & Dragons, as the name suggests, is your average puzzle game with a role-playing and strategy twist. The game allows you to choose a selection of dragons to join your team to send to dungeons (levels), similar to the Pokemon Mystery Dungeon series (please support the latest switch release). Occasionally, you can have other characters such as magician on your team.

As you progress through the game, you have the chance to collect dragon eggs that can unlock different monsters from 1-star monsters to 8-star monsters. You also have other things like monthly quests or event dungeons, which allow you to get limited items or eggs. So I say, anyone who is bored of the usual puzzle games like candy crush, Puzzle & Dragons might be the mobile game for you if you’re looking for something adventurous!

I am in no way a tower defense fan. In fact, I didn’t even go through a Plants vs. Zombies phase. I also mock gacha and mobile games alike on a daily basis. So how the fuck did I become obsessed with Arknights?

I’m here to share the answer to that question.

Arknights is a tower defense game with a twist—each of your units, or “waifus” (although there are men too, hell yeah), fulfill a different role common in the RPG genre. There are healers, tanks, mages, snipers, and melee DPS, among others. There are two other unique classes in Arknights but explaining how they work would be difficult as they have no RPG equivalent. We’ll just call them “enablers” (as in, they let you deploy all your other units) and “wildcards”.

Playing Arknights is a blast for a lover of strategy games like myself. Its thought-inducing gameplay is akin to series such as Fire Emblem. Even after completing all story missions, there’s still more to do in the form of upgrading all of your squad to tackle challenge modes and preparing for future events or missions.

Does all of this mean I’m into a P2W gacha game from hell? NO. This game is far from unforgiving gacha such as FGO and Epic Seven, where it can take you months to get high rarity units, one at a time. Let’s face it, part of the fun of gacha games is the character-collecting aspect of it. We all want to unlock new additions for our team.

Below is a picture of all the high-rarity characters I’ve acquired throughout my first month in Arknights. As an entirely F2P player. 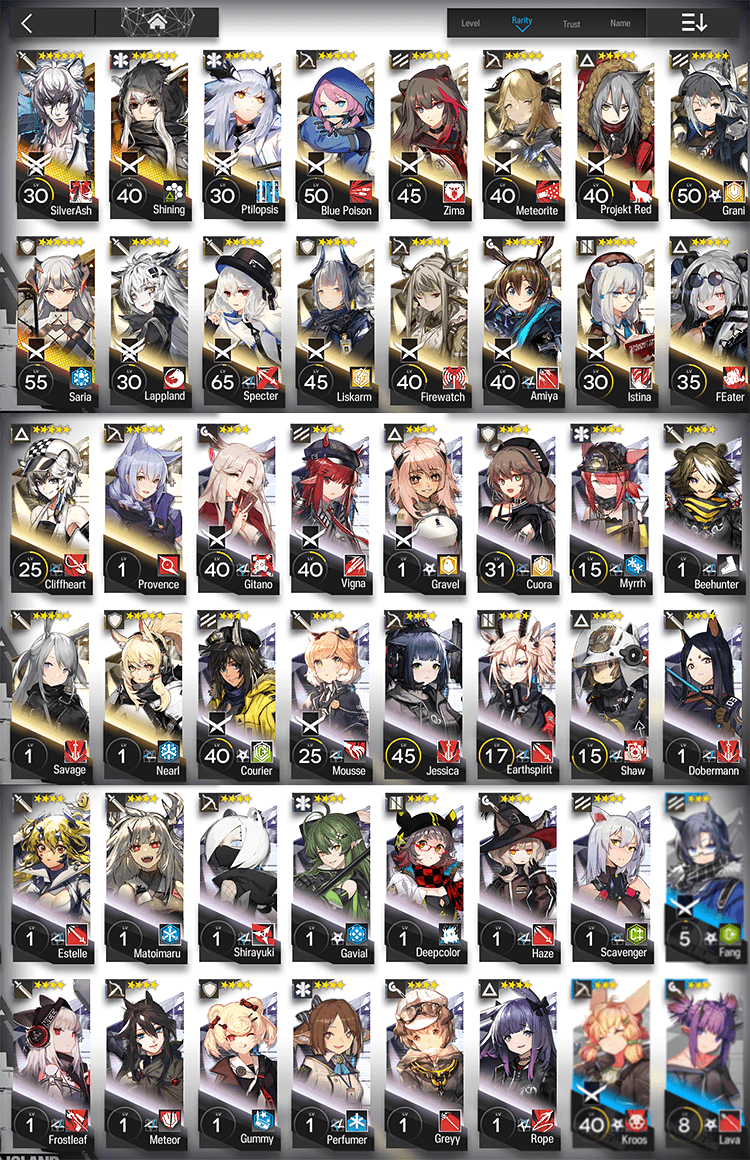 You can clear any content with a mix of entirely F2P 3-star units that the game gives you and 4-star or 5-star units you get from gacha, however, you don’t need to have such conservative expectations—you WILL get high-rarity units. Why?

Infodump concerning gacha rates below. TL;DR: Even if you don’t pay a single penny this game treats you like a VIP SSS+ customer and refuses to paywall your progress.

Whether you’re an avid gacha player who’s tired of the bullshit your main game is throwing at you, or just a casual looking to try a fun and new game, Arknights is my recommendation.