by Haru ☆
in Korean Entertainment
0

Another era, another catchy song from TWICE! With TWICE comes the expectation of a catchy hook and trendy dance move, and they certainly have delivered the expectation. Instead of sticking with Black Eyed Pilseung, this title track has been produced by collapsedone, who has produced songs such as Day6’s “I Wait”. I was excited to hear that they were shaking things up a bit with a new producer, but low-key missing bop-making Black Eyed Pilseung.

The song itself was said to be a house-beat mix full of pop, rock and disco elements. You can definitely pick up each element in the song, and combined with the light and sweet vocals of TWICE, the song comes together quite nicely. It’s a new sound from TWICE, and it actually really suits them. What I like about collapsedone, is that he has suited the parts to TWICE’s vocal ability, which is something that had be negatively viewed in their past releases with Black Eyed Pilseung, as some parts were too overdone for what some girls were capable of vocal wise.

The line distribution is set well, and each line suits the girl individually, which is what I like about TWICE’s releases, full of individuality. The addictive “Knock knock knock knock on my door” has been stuck in my head since release! The dance move that goes a long with it is really cute as well, but more technical than it looks to be honest. At first I could barely do it for some reason!

Overall, Knock Knock is up there in terms of my favourite TWICE tracks, new style and great use of their vocals. Addictive chorus and well thought-out line distribution. A solid release.

This M/V backs away from the individual and cosplay concept TWICE had been going a long with for their past releases. The M/V is the continuation of the “TT” M/V, as everything ties in together. After watching the video many times, I have come up with some theories. The video itself seems to be a fun sleepover party with a random JYP saying ‘hi’ at the door, and them getting locked out and vanishing, but to me it seemed much more than that.

While having a fun time with their girls, TWICE hear a knock on the door, they go to open it, and it’s none other than whispers JYP. An annoyed faced TWICE slams the door and walks back up the stairs, but they’re stopped when another knock comes from outside. They open it and this time, it’s a book; “The TWICECoaster”. They shuffle through the pages of the book, which are full of wonderful drawings of fairy-tale characters, including Ariel, Elsa, Tinkerbell and Pinocchio. But wait! These are the same outfits the members of TWICE cosplayed as in their TT M/V! 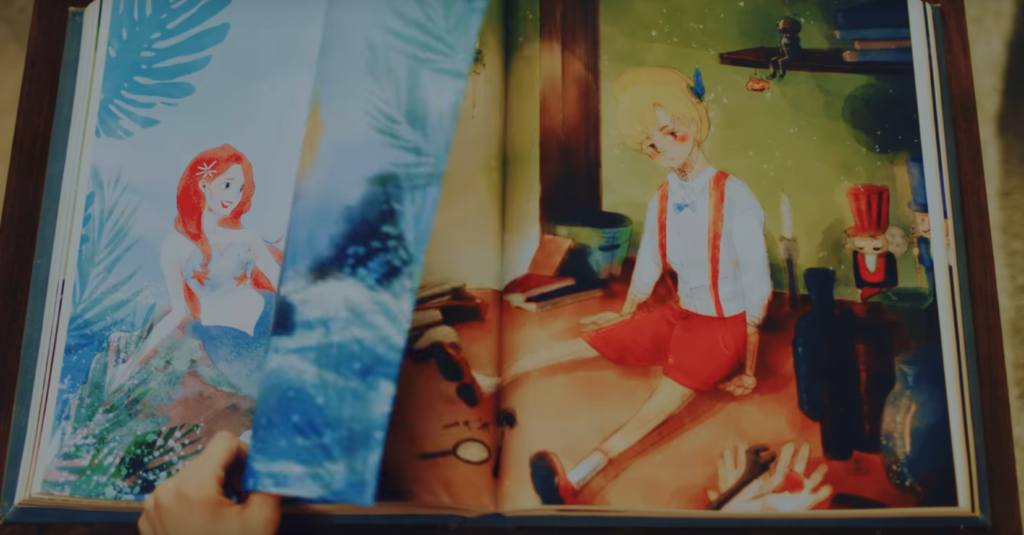 The girls get distracted by snow-fall, and commence to go outside to have a snowball fight. At the very start of the song, Nayeon’s first line is “The door closes at twelve”, and after the girls are enjoying themselves, it shows the clock ticking to 12, with the door shutting. A concerned group of girls run to the door to knock and make enough noise for someone to open the inside. The scene shows a shivering TWICE and cuts to The TWICECoaster book flipping crazily until it eventually closes. The song ends and the girls vanish, with the scene showing us the inside back at the TT house, and a knock at the door. Shocked kids is the last we see of this M/V.

From what I can gather, the girls basically received this cursed book, and didn’t make it back inside their house by 12, thus freezing to death outside. After they had died, their ghosts lived in this house, and each girl individually took on the ghost-forms of these characters in The TWICECoaster book, which brings us back to the TT M/V! It’s basically a prequel and a sequel. The haunted house is haunted.. with dead TWICE members. Knock knock knock knock knock on my door!

Overall, without the deep thinking, the M/V was fun and enjoyable, and comforting winter sleepover video.