Suki na Hito ga Iru Koto or A Girl and Three Sweethearts is a Japanese drama that is currently airing on Fuji TV. The drama was released on July 11 and stars Mirei Kiritani as Misaki Sakurai, our lucky leading lady. She poses as an adorable, quirky girl with a love for baking so strong that she disregarded finding a relationship of any kind in order to pursue it. However, she’s suddenly dismissed from her job, and fatefully meets her high school sweetheart, Chiaki Shibasaki – played by Miura Shohei – on the same day. She then begins to work part-time at Chiaki’s restaurant, and while living there realises that his two younger brothers, Kanata (played by Yamazaki Kento) and Touma (played by Nomura Shuhei) also live there.

An Introduction to: A Girl and Three Sweethearts 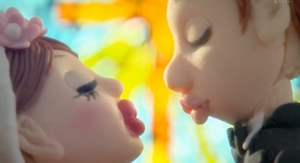 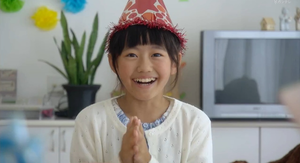 Our story begins with a holy matrimony, as two clay dolls appear in what seems to be a chapel. Uplifting music sets the scene as both man and wife grow closer, almost kissing – until the camera pans upwards and we’re greeted with the sight of the female lead’s puckered lips. Collapsing onto her bed, she proclaims that whatever on earth she had previously been doing is completed. Resting, she glances at the time and switches completely from her exhausted self to a panic. Pausing the music she grabs some clothes and runs for the door, swiftly transitioning on to introduce herself to the viewer and explain the amusing way in which she started to love baking. 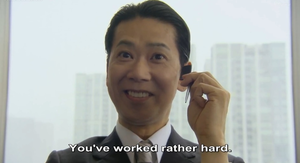 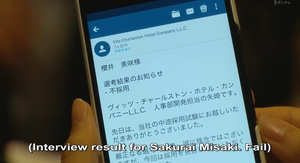 We then see our main lead sitting in an interview for a new job. Her interviewer asks her why she’s there, and we then get a flashback to how her boss had fired her; for the absurd reason of making more bread. She’s dismissed from her interview, but decides to wow her judges with one final weapon – a cake portraying a chapel and marriage which she had been working on. The three men look at it with confused expressions, and then question why the two dolls are pouting. She replies stating that they were kissing. Laughter ensues, and we skip forward in time to see her receiving notice of her failed interview when at dinner with her friend. 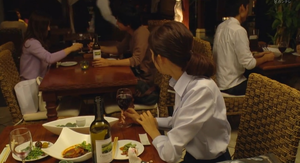 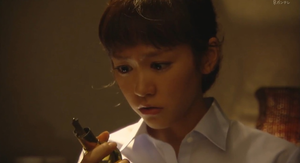 Her friend interrogates Misaki on her current relationship status, which the female lead implies is non-existent. Making fun of Misaki’s lack of experience in dating, she takes the cake she had made and gives it to a waiter,  asking them to go out with Misaki. Saying her goodbyes her friend leaves, and Misaki is left alone and surrounded by couples. The waiter her friend had tried to set her up with heads back to her table, and she starts to talk to him, but he completely ignores her. Mortified, Misaki rushes to the bathroom, and has a little cry while inside. However, when standing up to unlock the door, she breaks the handle. 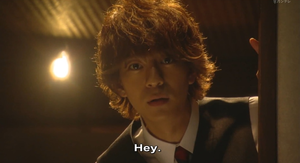 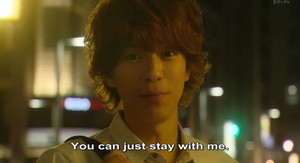 Calling for help, an employee at the store overhears her, and warns her to stop back as he breaks the door open. Looking up in shock, realization dawns upon the main lead as she’s faced with her high-school crush, Chiaki. Deciding to catch up, Chiaki and Misaki walk home together. Chiaki then tells Misaki that he had tried her cake, and asks her if she’s employed. He sees through her lies and asks her to work at one of his restaurants, but as it’s far away to live with him!

My thoughts on A Girl and Three Sweethearts so far:

This was an amusing and interesting introduction to episodes that ended up being entertaining for the watcher. The plot progresses fairly quickly compared to the first episodes of other dramas, but I personally enjoy this pacing. If this continues it means there will be more interesting content in each episode, which I cannot wait for! Misaki’s character was open and inviting, which created an attachment between me (the viewer) and her. I felt that I could easily relate to her and empathised with her emotions on many accounts.

The first episode also introduces Kanata and Touma’s characters to the viewer. Kanata is a typical tsundere, and takes a quick disliking to our main lead over false pretence. I can’t help but think this may be the formation of a love triangle! Touma welcomes Misaki into their house however, and is much more laid back when conversing with her. It’s interesting to see how all three brothers interact with Misaki in different ways and to see the main lead slowly get accustomed to living with three boys. It’s also interesting to see how Kanata’s views towards Misaki change so drastically and he starts to warm himself up to the idea of spending time with her. I can’t wait to see how this progresses! I can almost feel myself getting infected with second lead syndrome.

The first episode made me experience a whirlwind of emotions; there were comedic scenes that resulted in fits of laughter, and heart-rending scenes that made me shout at the screen in an outburst of emotions. The comedy and humour portrayed throughout this episode was golden, and many one liners were delivered with just enough impact to have the viewer laughing in shock. However, as turmoil and conflict broke out in certain situations, the melodramatic essence of the scenes made me experience emotions of hurt, anger and melancholy.

The second episode keeps up with the initial pacing of the drama, and meets the expectations set by the previous episode. A love triangle becomes glaringly apparent in this episode, but I’m fairly undecided as to which main man I want Misaki to end up with. One thing I like about this show so far is that there’s no ‘main’ male lead who the audience expects the female lead to fall for, so everything is quite vague. This in turn keeps me excited and on the edge of my seat, anticipating any kind of development between Misaki and one of the three boys!

This drama’s off to an interesting start by the looks of this first two episodes! There’s definitely some qualities that this drama has which make it addictive; whether that’s it’s dream cast or the beautiful setting of the seaside is irrespective. I recommend this drama to viewers who enjoy comedic and eccentric plots which some cliché elements. This drama has been a very refreshing watch so far, and I can’t wait for the next episode to air!

Since their group’s official debut and the release of their album, ‘P.C.F’ and hit single, ‘Choose One’ in July 2022, PSYCHIC FEVER from EXILE TRIBE are back with a brand-new single. This time, a collaboration with upcoming Thai boy...

Park Minha is getting married! The former member of 9Muses has posted a video on her youtube channel for her viewers and fans announcing the news of her impending nuptials. Park Minha is the sixth member of the group...