Throwback Thursday: 2 Dramas from Taiwan You Should Watch

When I was still a young kid living in sunny Singapore, Taiwanese dramas were all the rage till the Hallyu wave came by and influenced everyone from young to old to start watching Korean Soap operas and the likes of them. So for today’s Throwback Thursday special, let me introduce you to two dramas from Taiwan that I think everyone should watch!

Starring Angela Zhang, Ambrose Hsu, Wallace Huo and Jill Hsu, this drama aired in 2003 on SETTV. Consisting of 18 episodes, what I like about this drama is how touching it can be as you continue to watch it. Two children living in the same orphanage ended up on different paths. Zeya was taken in by a rich family while Xiao Pin Gai was taken in by a poor mother. Before leaving, Zerya even promised Xiao Pin Gai that he will be back for her one day. But alas, when he returned a few day later, Xiao Pin Gai was already gone. 20 years later, they saw each other at Dolphin Bay again although both of them do not recognise each other. Xiao Pin Gai was by then known as Tianbian and she eventually secured a job as a singer with the help of Zerya. Zerya also had fallen in love with Tianbei before finding out one day that Tianbei is actually the real granddaughter of the family that had adopted him. In a bid to get Tianbei’s grandfather to agree to recognise her as his granddaughter, Zerya agree to marry Shan Ni who is Tianbei’s half-sister. Will Tianbian’s grandfather accept her? Will Zerya be able to find a loophole and get Tianbei to marry him? You need to watch it to find out more! 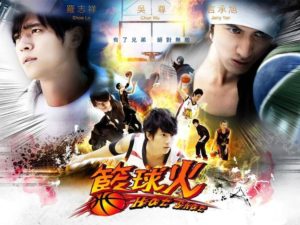 Airing in 2008, this drama starred Jerry Yan, Wu Chun, Coco Jiang, Show Luo and Tracy Chou. Martial arts meet basketball in this drama that is aimed at teenagers. Set in a school where academic success is more important than sports, Liying, the daughter of the headmaster, vowed to revive the school basketball team by volunteering to be the head coach. Liying eventually picked up Yuan Da Ying, a country boy with no skills but plenty of passion, to be the 1st member of the new team. Their recruitment goes into high gear when Dong Fang Xiang, a legendary player transferred to their school. Dong Fang Xiang finally joined the team after losing in a basketball challenge to Yuan Da Ying. At the same time, Da Ying fell for Jie Er, a classmate of his who looks like his former childhood crush. Jie Er’s father also worked for Dong Fang Xiao’s family. Despite these differences, everyone works together on the team to aim for the Championship despite the many challenges and setbacks that they will face.

These two dramas had me hooked every week looking forward to the very next episode. At Dolphin Bay had me shedding many tears while Hot Shot inspired me as a sportsman. I hope everyone will enjoy these two recommendations!

OH!Press Feature: Throwback Thursday The Dramas of Our Youth

This year's Harper’s Bazaar’s Charity Night took me on a trip down memory lane. With Chinese Paladin Beauties, Liu Shi Shi, Yang Mi, and Liu Yi Fei, in one frame, I knew I wasn’t the only one. On that...