超水道, also known as Chosuido, is a four-member group that develops visual novels. Chosuido is behind many visual novel series such as “Boteneta” and “Sakura Yuna of Kamigyo,” which were all released for mobile phones. Every visual novel is done with a mixture of animated stills and dialog, coupled with a soundtrack for the upmost experience for the reader. Now, Ghostpia, their latest visual novel, is slated to be their first release on the Nintendo Switch.

First off, I’d like to say thank you for allowing us to interview you and taking the time to answer all these questions.
Thank you very much for your interest in us. It is a really meaningful event, the fact that Ghostpia has caught the attention of the overseas media.

Starting with ‘Ghostpia’ as it’s the latest release from Chosuido, it has a darker tone compared to previous releases. Can you explain the story-line of this visual novel?
Our story is set in a city of a continuous night, where snow is falling. There, some things exist that we would call “ghosts”, something which resembles an immortal and invulnerable human-like being. The main character of this story is a girl named “Sayoko” living in this ghost city. The point of the story is that she, as the only stranger in this town, finds all the answers about the mysteries of the city on her own (What’s going on in this town and why is she here?). The purpose of the story is to find her own answers about the issue with her friend.

Ghostpia is slated to be released on the Nintendo Switch in the future, which is the first console release for Chosuido. How excited are you for this?
This is a very exciting experience! I have been playing console games since a long time ago. I even wrote in my “Future Dream questionnaire” that I wanted to become a “Game Creator” back in my Junior High School days. I think that I might be able to say that my dream has come true. 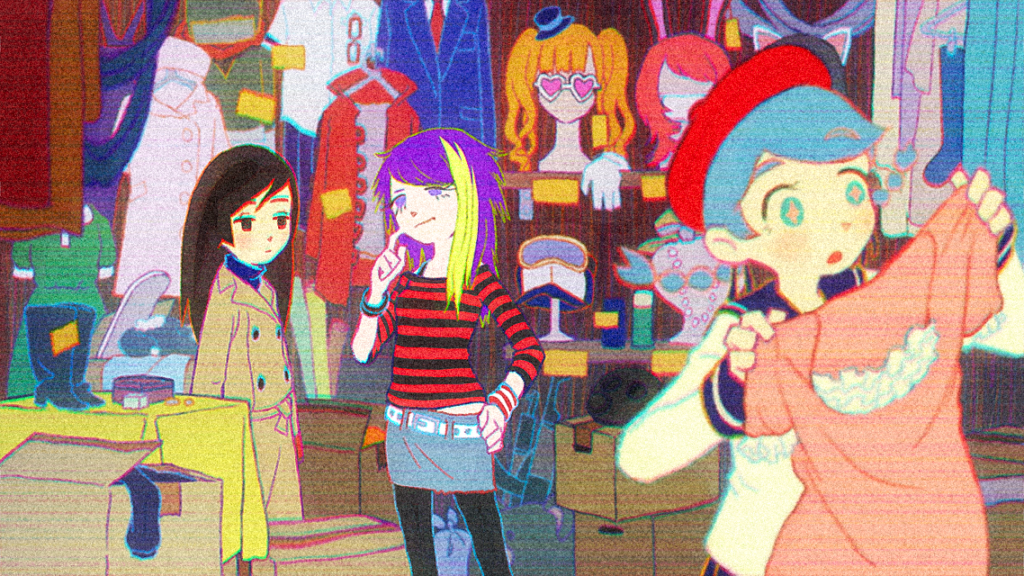 For the design of the game, why was this particular art style chosen for the game?
In order to create a new visual novel game, I thought that it was necessary to create a new style. Based on the style of my favorite foreign cartoon, our illustrator Suzume Yamamoto has added some wonderful arrangements and after a few brushing ups, we reached the current style.

Were there any inspirations that you got when creating Ghostpia?
At that time, I took a temporary absence from university and participated in a certain project to earn a living. It was extremely harsh and the life rhythm between day and night had been completely reversed. This was my first inspiration. Being up all night, sleeping during daylight, I thought that I was living like a ghost.

With the Nintendo Switch version being released soon, it’ll be the first release from Chosuido with an English adaptation. What are you hoping that international fans will like about this visual novel?
We are very interested in how the style of our work is accepted by international fans. It has always been our goal to release our work to the global market, so if you like our work, there is no other thing that makes us happy.

As a small group, how long does it take from developing the visual novel to publishing it?
That’s a difficult question. Some of the works from Chosuido have been produced and released within just one week, but Ghostpia has taken about three years. This time is perfectly proportional to the scale of the work and the number of pictures. It takes a long time to publish a visual novel game with lots of pictures. Because Chosuido is a small team, there is a limit to the number of pictures that can be drawn by one person. This is one of the difficult problems.

However, our idea is that a large amount of pictures is not proportional to the enjoyment of a visual novel game. Ghostpia is such a style that just happened “by chance.” I think that you can feel what we think if you look into the past works of Chosuido.

The mobile app version of Ghostpia has been out for a few years now with the Nintendo Switch version coming out soon, are there any thoughts so far for a future project or anything currently in production?
There are no specific plans for now. However, I am very interested in developing a visual novel designed exclusively for the Nintendo Switch, right from scratch. I have that dream. If Ghostpia is well-received, we hope to make something like that next time.

Where do you see Chosuido in the future? Do you want it to grow into a studio size or to keep it as a small group?
There are many uncertain things in our future. However, our first priority is that our work is available and can be enjoyed outside of Japan. I feel romance in making a studio, but since we are just creators and not managers, I don’t have any active plans about becoming a studio. Nevertheless, I believe that we need more people than we do now. But the scale will not be doubled. We would also like to have an office or an atelier in which we can use it for Chosuido activities. Now, we are working from our own homes and it feels inconvenient in many cases.

I’d like to thank Chosuido for taking the time to answer all of these questions. Are you excited for the release of Ghostpia on the Switch and what are you hoping that Chosuido comes up with in their next visual novel? Leave your comments down below!

I am happy to announce, on behalf of OH! Press, that we are currently new writers for our blog! We are looking for those who are interested in broadening their horizons, whether it's making a creative piece, writing a...